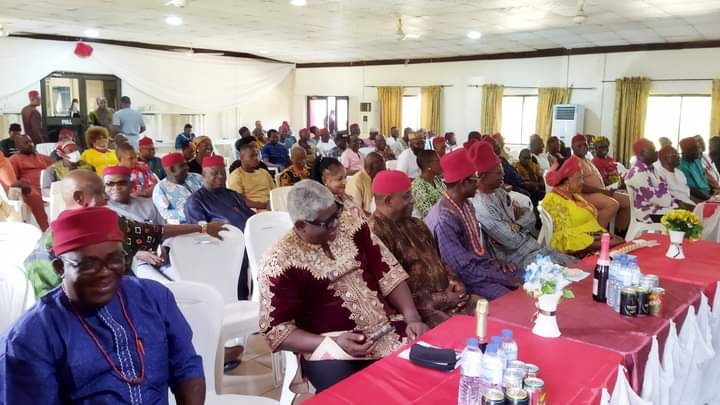 In his remarks, the President of Ohaneze Ndigbo Worldwide, Anambra Chapter, Prince Emeka Udodeme, expressed satisfaction with the turnout of people from Anambra Central Senatorial District, describing them as peace loving people and progressive.

Udodeme stated that the organization would not relent in their task of uniting the Igbo nation, as well as work assiduously towards ensuring that an Igbo man of South-East extraction mounted the rostrum as the next president of Nigeria.

He urged Ndigbo to give peace a chance by listening to and following Ohaneze leadership, saying that the National President Ohaneze Ndigbo Worldwide was already having a meeting with leaders of different ethnic groups to fashion out ways on how to see an Igbo man become the president of Nigeria in 2023.

He advised Ndi Anambra Central to key into the zoning arrangement and shun acts capable of ruining the chances of the zone having a seamless transition after the eight years of South Senatorial Zone.

He reiterated that after the turn of the South it would come back to the Central, and assured that under his watch the Anambra Central would not make the mistake of allowing a politician from the zone to emerge as a candidate of any political party.

Prince Udodeme, popularly known and addressed as Odegba, stated that they had written various political parties, notifying them that they would supervise their primary elections to enable them to ensure that parties obeyed the existing and standing order.

He announced that they would take the message of zoning to Anambra North on the 19th of June 2021, even as he enjoined all the political parties to obey the zoning system, emphasizing that it was the turn of Anambra South to produce the next governor of Anambra State.

Speaking, the Chairman of the occasion and the Vice President of Ohaneze Ndigbo Worldwide, Ichie Damian Okeke-Ogene, said that zoning formula, which, he said, they propounded in the 2017, should be adhered to and respected.

Okeke-Ogene who is the immediate past President of Ohaneze Ndigbo Worldwide, Anambra State Chapter, maintained that Zoning reduced costs, thuggery, wasteful spending, violence, and needless showmanship. He commended Governor Willie Obiano for standing with Ohaneze Ndigbo and also for allowing his party to pick his candidate from the South Senatorial Zone.

Contributing, the former Chief Judge of Anambra State, Justice Peter Umeadi, said he was in full support of the zoning system. Umeadi who worked as a Judge since 1997, and became a Chief Judge in 2011, retired in 2019.

He said he came to identify with Ohaneze Ndigbo Worldwide and to throw his weight behind the call for the maintenance and sustenance of Zoning in Anambra State, adding that he joined partisan politics one month after his retirement.

For his part, the Senior Special Assistant to the Governor on Project Monitoring and Implementation, Amb. Jeff Ubah, appealed to all and sundry to respect the zoning system.

According to him, anywhere there were peace and tranquility, politically, there were elements of zoning and rotation in that area.

He noted that anybody averse to zoning system should be stopped and reprimanded. Amb. Ubah called on people to rise against any politician who was going against the zoning arrangement in the state, adding that zoning had yielded positive results and should be sustained.