There is a general myth that the advent of the month of December records many accidents on the highways; with many attributing them to the handiwork of evil spirits which are most active at that time of the year. It is a myth that has existed for a long time.

However, rather than attributing accidents at that time of the year to spirits, it is the people themselves who should claim full responsibility for such as most road accidents that occur at this time are caused by the recklessness of motorists.

No doubt, the haste to do brisk business at this period causes many drivers to drive beyond recommended speed limits, thus inviting accidents that are highly avoidable.

Indeed, many commercial vehicle drivers, especially those under what is known as hire purchase arrangement, see this period as one to make enough money to pay back their masters; while some strive to meet targets set for them by their masters. This makes them to attempt to do as many trips as they can before the end of each day, thus endangering their lives and those of their passengers. 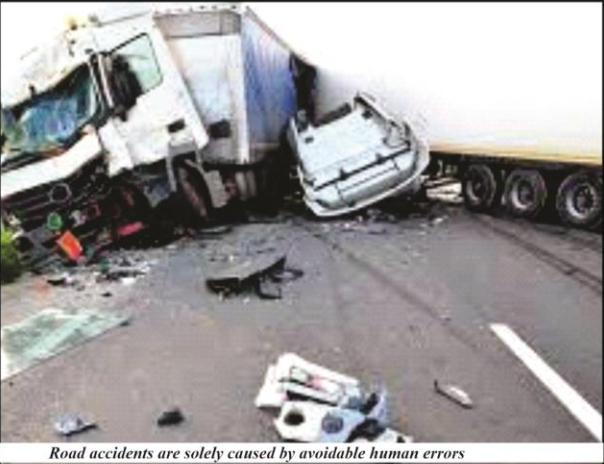 Some of these drivers, including private vehicle owners, never had proper driving tests and therefore constitute danger to others on the road. Many are also guilty of drunk driving. These are some of the reasons why at this time of the year accidents happen almost on a daily basis.

There are also drivers who, due to lack of patience, drive against traffic and thus put their lives and those of others in peril.

The Federal Road Safety Corps, FRSC, has tried to sensitize the general public by spreading the message of safety, both on radio and television, on the need to be careful this period. Drivers, whether commercial or private car owners, need to always remember that it is better to be late than never.

It should always be remembered that once an accident happens, the victims either end up in hospital or in the morgue. Either way, after all the rush that caused the accident, victims do not complete their journey and there lies the futility of all their haste.

So talking about evil spirits on the highways does not make sense. Every motorist should see themselves as people who have their lives on their hands and should therefore try to safeguard those lives.

Let every motorist remember to be in control of their speed limits. There are so many drivers out there without certified driving licences. Encountering such drivers when in high speed can be fatal because they lack experience to drive properly on the highways.

Commercial drivers should avoid hard drugs this period. They have this misconception about such drugs giving them the energy they need to drive long distances and to stay awake. It is merely an Ill wind that blows no one any good. The same goes for alcohol consumption before hitting the roads.

These are parts of the problem why accidents are on the rise at this time of the year and not evil spirits as people erroneously believe. We can all help to avoid accidents this period.