Your Mind Is More Powerful Than You Think!!

I have always been an advocate of having the right mental disposition about life, that is being positive. Winning is not easy, and so is losing. None is easy: to win you have to try, to loose you still have to try. Either try doing something or not doing anything. This week, I wish to share with you this short story I bumped into in a blog. Hope it interests you too. Read on…

Why “Mentality” Is Very Important In Life!!!

So recently, my brother entered a local chess tournament. For this story to make any sense, I must mention that my brother is a  really good chess player. ( For all the chess players out there, he has a 1500 rating on chess.com).

And a lot of the people who attended this tournament, my brother has beaten them at one point in time. Safe to say he was the favorite to win.

However, my brother is very shy. He’s also very quiet and won’t speak up.

Why is this important to the story? Well, with being shy, comes low confidence.

And,  to cut the long story short he lost. 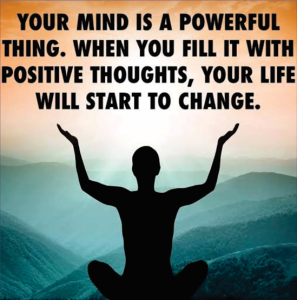 I was there and truthfully was disappointed in him. I know this isn’t an important tournament, but you can’t let stress control you, you can’t let your confidence ruin your performance!

After talking to him, he admitted that he didn’t expect he would win the tournament in the first place. Now, this shocked me. It didn’t make sense to me.

But recently I read the book: “The Magic Of Thinking Big”. And from that book, I now understand the power of your mentality.

So, I told my brother: “You won’t win the tournament if you think you won’t win!”

He looked at me crazy, it didn’t make sense to him what I just said. But I told him: “Next

So the next tournament( this was yesterday), he entered the tournament thinking he will win, and what happened is that even “stress” went away. ( He also won any time, when you’re facing someone ‘better’ than you, believe, truthfully believe that you can beat him/her”.

A week later, my brother texts me, and this is what he said: “Hey, bro. Remember what you said about believing? Well today I won a game against an IM”( IM in chess means international master) He followed that text with: “I think you might be right about that!”

So the next tournament( this was yesterday), he entered the tournament thinking he will win, and what happened is that even “stress” went away. ( He also won)

Now, this series of events proves to me that, your mentality, to how you approach things is very important!

An example I always tell myself is Kobe Bryant. He never, and I mean never thought I was going to lose. He entered every game with the mamba mentality. And now he’s remembered as one of the best to play the game. (Rest In Power mamba).

Here’s a better example for the people reading, Gary Vee. Gary Vee, even if you think of him as a meme, you can’t deny that he is very successful. Whenever he makes an investment, he never thinks about the fact that he could lose money, instead he believes in his core, that he’ll make a profit. And he does!

What I want you to take away from this blog is: start everything you do, with the mentality that you are going to succeed! Believe, truly believe that you will succeed and you will.

Your Mentality Determines 50% Of Your Success. The Other 50 Is Hard Work!