Fifteen men and fifteen women, who previously lived in concubinage for many years, were last Saturday, November 13, joined as husbands and wives at the 2021 annual mass wedding sponsored by the Young Catholic Professionals (YCP) of St Joseph’s Catholic Parish (UNIZIK Temporary Site), Awka, Anambra State, at the parish.

The Parish Vicar I, St Joseph’s Parish (UNIZIK Temporary Site), Awka, Rev. Fr. Vincent Nwajagu, who led in the wedding Mass, received the consent of the 15 couples on behalf of the Church.

In his homily, Rev Fr Nwajagu enjoined the new couples to uphold the vows of love and fidelity which they took, as well as live according to the tenets of marriage in accordance with the mind of God. 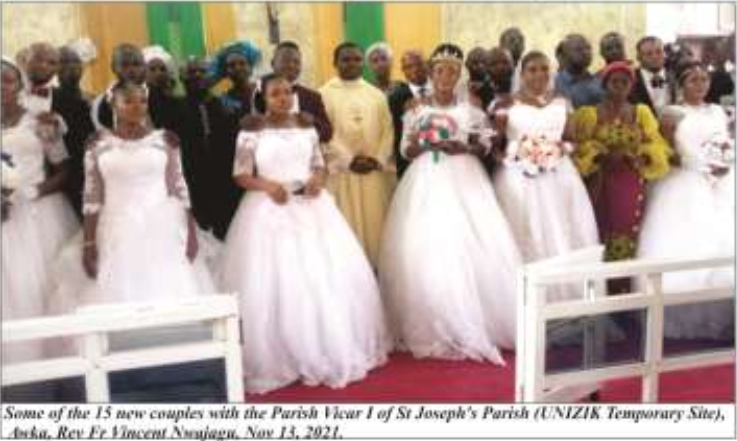 Pointing out that love, procreation and proper training of the children were the reasons why man and woman united themselves in marriage, the parish vicar tasked the couples on proper formation of their children.

The parish vicar commended the Young Catholic Professionals for the efforts and sacrifices, which, he said, the group put in place to gather the men and the women for the wedding, as well as sponsoring the sacrament for them.

According to him, it was a noble goodwill for the YCP through its leadership and members to have conscientized the mind of the men who previously lived in concubinage on the need to solemnize their marriage and return to the sacrament with the Church.

Speaking on the occasion, the YCP President, Engr Chika Ngobili, on behalf of the executive and members of the group, congratulated the 15 newest couples for giving their consent to the Holy Matrimony.

Praying that the blessings of God which they received would sustain the marriage of the fifteen couples, the YCP president appreciated all who contributed to the success of the event for their support and goodwill.