A priest of the Catholic Diocese of Ekwulobia, CADEK, Rev. Fr. Philip Okoye, has beckoned on youths to redirect their attention to agriculture and desist from undermining the profession as it had the capacity of introducing economic boom in the nation, saying that proper farming techniques were needed for maximum yield.

The priest who is fondly known as “Diji” due to his many feats in yam farming, described agriculture as the biggest and fastest way of enriching the rural populace and stabilizing the polity.

He said, ‘We have no choice than to help grow agriculture in all states of the federation, create wealth and jobs, nothing that the problem in Nigeria was that consumption over production. 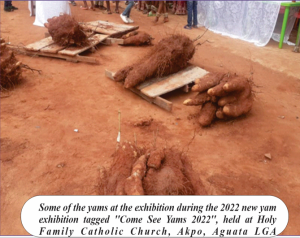 ‘We import everything we use and eat and we cannot produce the food we eat. It’s horrible,’ he said.

‘It’s only when we begin to produce what we eat and use in this country that we can think of stabilizing our economy, otherwise nothing,’ he said.

Fr Okoye noted that farming remained his hobby, adding that he was comfortable impacting positively to the sick and elderly; even as he maintained that he was satisfied teaching the younger ones on the need to be productive through yam farming, as such would help them to keep away from vices.

He urged the government to provide financial assistance in the form of subsidies, loans and grants, to farmers in order to boost agriculture in the state.

Speaking about what motivated him into farming, Fr Okoye stated that his intention was to help in feeding the many hungry people, especially the aged and the sick, who could no longer fend for themselves. He said that the 2022 new yam exhibition was dedicated entirely for the building of the “Chapel of Divine Providence” at Holy Family Catholic Church.

He thanked God that some of the boys who he had trained already had massive yam farms which could compete with his own.

According to him, ‘There is no magic at all. Before cultivation, I invite all to come and witness what I’m doing. Maybe, I give a lot of attention to my farms.’

Earlier in his homily, Fr Ezeaka called on Christians to follow the narrow path to heaven, which, he said, had to do with sacrifice, love, faith and forgiveness.

In their separate speeches, Sir Joe Okpalaobi, High Chief Charles Obiekwe, Chief Eze Obiora and Ocheze Chika Oragwam, commended the parish priest, Fr Okoye, for his selfless efforts in the parish, especially the rapid progress which they said the parish had recorded within a short period of his stay.

Fides also learnt that the priest had just harvested only about 40% of the planted yams and expecting to harvest much bigger yams from his farms this year.