As more youths get entrapped with the myth of making money through ritual killings, Ikeugonna Eleke looks at the trend, the factors that fuel it and what society is doing to curb the menace. Chuks (not real name) was a second year student of Nnamdi Azikiwe University, Awka.

He lived in a hostel in the same neighbourhood with this reporter. He was a level headed youth whose age could be anywhere between 23 and 25 then. He was not blessed with a silver spoon and to make ends meet, sometimes he helped fellow students to wash their clothes. During the long vacation of 2017, Chuks disappeared. 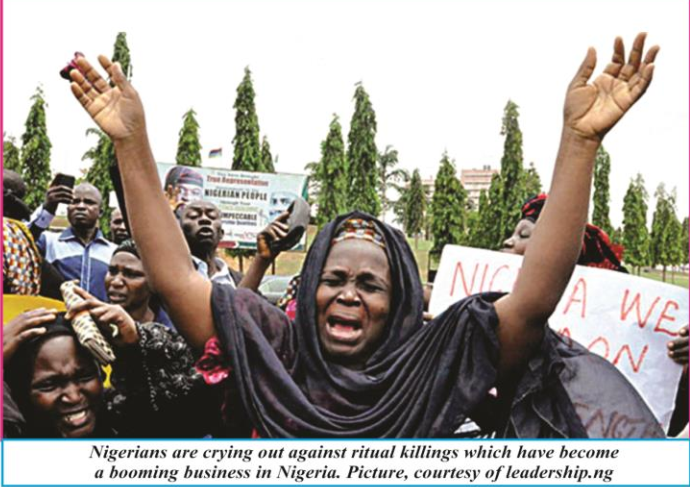 He probably travelled to meet his parents like most students did; or so many thought, but at the commencement of the next academic year, he failed to return to continue his studies. He however visited the neighbourhood in a clean Toyota Venza SUV around November of the same year. ‘Chuks, you brought your parents’ vehicle to school to come and show off in school, is it not?’ This reporter queried Chuks jokingly.

He simply smiled wryly, and stated that the car was his. He bought drinks for his former hostel mates and later left. Much later, one of the hotel mates to whom another marvelled at the speedy transformation of Chuks’ life was told, ‘Oga, no go kill yourself ooo. Chuks is into yahoo plus. He just bought a land of N50 million at Okpuno (near Awka), and has said that once he returns again, he is going to erect a plaza there.’ This reporter has however not set eyes on Chuks.

Chuks is just one out of very many youths who have abandoned education and are pursuing wealth with vigour and through any means possible, including killing fellow human beings and doing other fetish practices.Although such practices are not new, they have recently reached a crescendo today, with many youths neck deep in those practices in various parts of Nigeria. 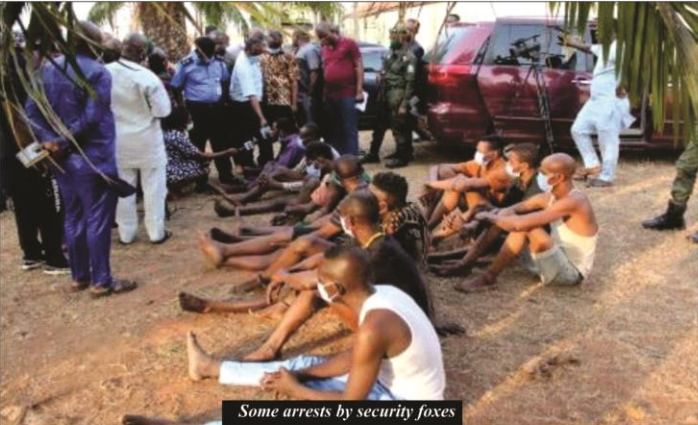 In Imo State, news had broken about a young man who was visited by his mother in a hotel. The poor woman who probably was coming to visit her son who was in school, bought fruits for him, but he ended up attempting to kill her for money ritual. The lucky woman survived by jumping through the window.

Also in Ogun State, the news of the killing of a certain girl, identified as Rofiat, by her boyfriend and his friends is still fresh too. The case of Rofiat was pathetic because she did not survive. Her head was cut off by the teenagers and was being roasted in a clay pot when they were apprehended by the police.

In Imo, another incident which has been dismissed as a comedy skit has still not convincingly been expunged from the minds of the people, as some youths sat at a popular roundabout in Owerri, excreting and using bread to dip in it as sauce before eating.

Practices like these have been described as Yahoo Plus. Fides made enquiries about the name, Yahoo Plus, and how it evolved. Yahoo Yahoo is a popular name for internet scammers, most of who operate with laptops. It is thus easy to see someone with a laptop being referred to as a Yahoo Boy. Several ways by which Yahoo Boys operate were identified. A student of Nnamdi Azikiwe University who preferred to be anonymous, said he had friends who were into internet scams.

‘It is either you are into love scams, or you pose as a business magnate, with the aim of defrauding some greedy white people through bogus proposals. The one I have seen a lot of guys do is love scams where young boys go into dating sites, search for white women; some of them widows, some rich and unmarried. Some just have a craving for black guys and as the relationship blossoms, the boys look for a way to rip off the women before closing their accounts in the site and moving on,’ our source said.

Fides gathered that as more people are becoming alert to internet scams, young boys have started engaging native doctors to make charms for them in order to hypnotize and defraud their victims. The involvement of the native doctors is what makes their activities, ‘Yahoo Plus’.

‘Some of these boys are told by their native doctors to call the names of their victims a specified number of times and perform rituals before going to them for business, or making phone calls to them. Some are asked to perform sacrifices by assembling children and buying them gifts before engaging in the activity. Sometimes, they have to buy things, put them in a plate and drop them at a crossroads at midnight, just to ensure that their victim parts with money.’ 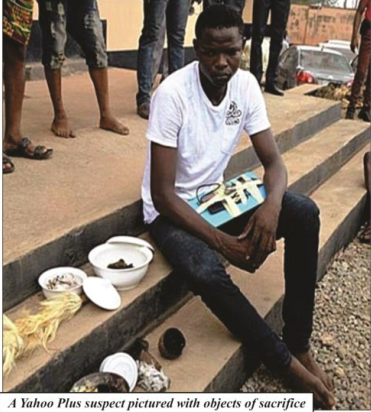 However, those who engage in these practices may have found that it is becoming increasingly tough to get victims to part with money, so they have resorted to other means and sticking to the name Yahoo Plus.

Meanwhile, investigations around the internet have revealed some of the practices young people are into to ensure they make wealth. Oke ite and nne ite are said to be charms prepared by young people who are on the fast lane on the instruction of native doctors to generate wealth.

It was gathered that the charms are prepared with different animals, including dogs and human blood, among other concoctions. Different types of roots and herbs are combined with different drinks, all to produce Oke ite or Nne ite, which, they believe, draws unlimited wealth to them.

Material sourced from the internet described Oke ite thus, ‘It is something that you will be repairing through blood sacrifice from time to time and it’s something that will one day start demanding for children or young women’s blood. Oke ite can make a man impotent, and may eventually one day start demanding for your loved ones. Most Yahoo Guys are into Oke ite or Nne ite.

‘The truth is any charm you do in this life requires steady sacrifice to keep working. Our youths are desperate and in hurry to make it in life that they forget one day they will cry.

In few years to come, so many of our youths are going to die mysteriously, some will run mad, some are going to be impotent because of Oke ite. I wish I could explain more.

‘Just note that Oke ite is bad and evil! Oke ite is just commanding your whole life wealth (money) to come at once. Sometimes it will involve your children. If it didn’t take your life or your children’s life, it will make your children useless because some will command your fourth generation’s wealth and give it to you and later your children won’t be able to achieve anything more than what you left for them.

Oke ite is very bad! While doing this charm they will call on very wicked spirits. They will only invite very wicked evil spirits that won’t forgive you if you fail your agreement!’

Many things have been mentioned as the reason for the craving for wealth by young people. They include the showy lifestyle of rich individuals, ostentatious display of wealth by music stars and even that of religious leaders. More factors include lyrics contained in music by some music idols, prosperity preaching by some religious leaders and the belief that God is an impossibility specialist who can do anything, including making one a millionaire overnight.

Also Nollywood films where such messages are constantly pushed, and the failure of parental control by most homes contribute to the craving.

There have however been some arguments about the inexistence of money rituals. Those who push these arguments believe that innocent and unsuspecting youths are only pushed into killings, while those who are into the business sell off the body parts and make a killing from its sales, while flying the kite of making money through rituals.

Owner of Silverbird Group, and former Senator, Mr Ben Bruce, is among those who believe that rituals cannot make anyone rich. In a tweet last week, Bruce said: ‘Leaders of tomorrow now engage in unimaginable crimes just to become millionaires overnight.

What has suddenly gone wrong with young people who now believe that rituals involving human blood will make them rich? So many Nigerians go missing daily,  while many are never found. Some are found dead with body parts missing. We must work to stop this trend. The narrative that poverty and unemployment get young people into ritual killings must not be accepted.

‘I want young people to know that there is no shortcut to being wealthy without hard work. Killing a human being for ritual purposes will not make you rich overnight. It will only take you to hell.’

Meanwhile, some people have started condemning the act and also standing up to it. A Pentecostal church in Onitsha, Grace of God Mission International, led by Bishop Paul Nwachukwu, last Sunday held a prayer rally of all members of his church through the streets of Onitsha to protest money ritual related killings in the state and the country at large.

‘Today is a very big and great day. Grace of God youths held a rally all over the streets of Onitsha, declaring and making it loud and clear that Yahoo Plus, Mkpulummili (hard drugs) and every kind of cultism, shall end in Onitsha. We prayed against the spirit of wickedness and lawlessness, praying that the youths will start to live a life that will bring glory to Christ. Honour their parents and be a blessing to society.’

Some people have advocated that flogging identified Yahoo Yoys, just as was done with consumers of methamphetamine, popularly known as mkpurummiri, may be the solution. Taking to his social media handle, a user identified as Uba Nwauba said, ‘We flogged Mkpurummiri consumers and today they have all repented. Why can’t we start flogging Yahoo Boys too? Is it because they have money and drive big cars?’

Already, some higher institutions in the country have started joining in the fight and taking measures to stop the trend. In 2021, Adeyemi College of Education, Ondo State stopped students from driving in the campus. In January 2022, authorities of Abia State University also stopped students from taking their cars into the school compound. Also, the Federal Polytechnic, Nekede, has taken same step.

Fides gathered that this step became necessary in institutions of higher learning as students using exotic cars, and suspected to be Yahoo Boys, now intimidate lecturers and also distract other students from their studies. They have also become role models to lots of students who now flock around them, becoming distracted from their studies.

The reason for the university authorities taking this step may be to forestall students toeing the line of Chuks who abandoned his studies in pursuit of illegitimate wealth. The fear too is that once these kind of people become role models, the university environment may soon be devoid of people seeking knowledge as all may join in the quest for quick wealth.