Woman Killed by Husband over Loaf of Bread

A woman, Mrs Ogochukwu Anene, known as ADA Awka, has been killed by her husband in Awka, Anambra State, over a loaf of bread.

According to reports, the woman had requested the husband to provide money for her to buy bread for the family but the husband had refused, saying he had no  money. But after the woman had bought one with her money, the husband, Mr Ndubisi Uwadiegwu, Anene from Enugu State, ate the bread alone without leaving any for the others. And when the wife demanded to know why he did not bring money but went ahead to eat the bread she brought, the husband started to beat her until she collapsed and later pronounced dead at the hospital. 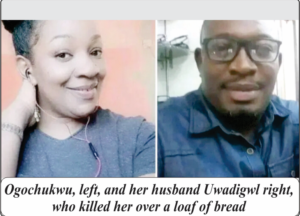 The husband had tried to bury her without informing her people when he was arrested. It was gathered that it was one of the woman’s kids that told how their father killed their mother.

Ogochukwu, a mother of five, was the senior prefect of Amenyi Girls’ Secondary School, Awka, 2000 set.

Fides gathered that the Anambra State Government, through the Ministry of Women’s and Social Welfare, is looking into the matter.