Sequel to its intensified advocacy for women inclusion and active participation in governance, a non-governmental organization, Women Foundation for Improved Living Standard (WOFILS) has held a review meeting to evaluate the success recorded in ‘Women Inclusion in Local Governance’ project.

It should be recalled that the project which was designed for a period of 6 months and took off in August 2020, gained support from ACTIONAID Nigeria and funded by Global Affairs Canada through Strategic Innovative Fund of the Women’s Voice and Leadership Nigeria Project. 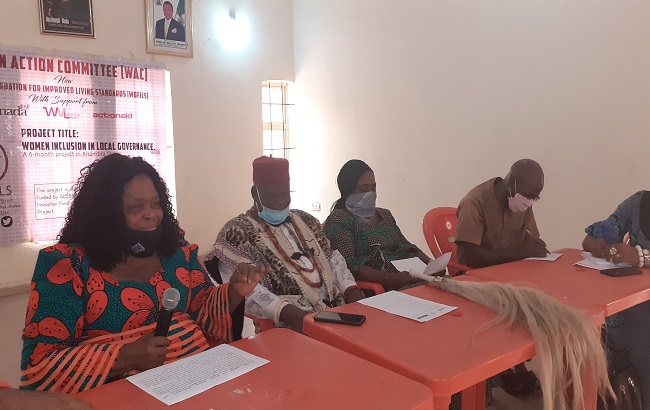 Fides gathered that WOFILS formerly known as Women Action Committee (WAC) organized the review meeting in order to monitor and evaluate the success which the project had been able to achieve and avail participants the opportunity of sharing experiences on changes that occurred during the project implementation.

The event themed, ‘monitoring and evaluation’ was held at Civic Centre, Nawgu, Dunukofia LGA, on Saturday, 23rd January, witnessed the presence of women, community leaders and others stakeholders at the forefront of canvassing for more women inclusion in governance.

In a welcome address, the Executive Director of WAC, Prof. Mercy Anagbogu, appreciated all the major stakeholders and communities’ leaders to joined hands in the campaign to support women inclusion in local governance, saying that their effort has helped to enhance slightly gender justice and freedom from violence. She noted that the support from critical stakeholders in all the pilot communities of the programme has assisted in increasing knowledge of barriers to women’s participation in governance, non-representation and few appointment into various positions in society.

She explained that the six-month Action Aid/WAC project has changed the people’s perception, attitude and behaviour towards women inclusion in local governance both in the three pilot communities and others in the state. She disclosed that the attitudinal change has motivated many grassroot women to begin to aspire for political participation in the upcoming 2023 general election.

‘the attitudinal and behavioural changes led to the achievements recorded in the Action Aid/WAC project which was characterized by demonstration of storytelling as innovative strategy for changing behaviour and attitude as designed by the project.

‘The grassroot women showed that they learnt a lot from the storytelling which has strengthened and enhanced their voice to participate directly in governance within their communities through active participation in community and political platforms that are being created.

‘The ability of the women to understand the barriers that prevent women inclusion through story, helped them greatly in focusing on what they need to do to overcome the barriers to political participation’ she stated.

Prof. Anigbogu disclosed that space has been created for women to participate freely in politics within their various communities in Anambra State, noting that women were now joining hand with all critical stakeholders to ensure that policies within their communities protect the rights of women. She noted that the achievement were made through community mobilization, media engagement, airing of story on women inclusion in local governance and advocacy to the traditional rulers.

She revealed that the potency of storytelling as an innovative strategy for changing behaviour has been highlighted through the project, noting that it ignited the motivation among women that led to women effectively mobilizing themselves to ensure that fellow women are supported.

In his opening remark, the Chairman of the occasion and the Traditional Ruler of Nawgu Community, Igwe George Okaa-Onowuogu maintained that the fight for women inclusion in politics continues even after the 6 months’ time frame of the project. He said that the upcoming election needs to have more women in participation and advocated that women should be given opportunity to led as they had recorded great successes in places where they had been allowed to show their expertise.

He expressed optimism that the meeting would help to generate evidence base information and called on women to join the three major political parties in the state.

During the story telling, Hon. Bibian Nwankwo, recalled how power-play forced her out of various elective positions which she intended to run for by the male folks and said that the programme has intensified her effort to via for the positions basking on the massive support which she hoped to enjoy from women.