Winston Udeh Donates 21 Vehicles to PDP Ahead of Nov Poll

A governorship aspirant on the platform of the People’s Democratic Party (PDP) for the November 6 election in Anambra State, Dr Winston Udeh, Friday, February 26, donated 21 Toyota Sienna vehicles to the party.

Udeh, a lawyer, said that he decided to donate the vehicles to the party to reduce the mobility challenges the party officials encountered in the course of performing their duties, especially now that the governorship poll was near.

‘Wherever you go, they will ask you for transport fare. And I kept wondering, does it mean that all these years the PDP does not have vehicles it uses for its daily operations, especially at the local government areas?

‘I said okay. It will be good to provide cars for all the 21 local government areas in Anambra State. This is not, in a sense, to suggest anything other than preparation of the PDP for the governorship election come November of this year. 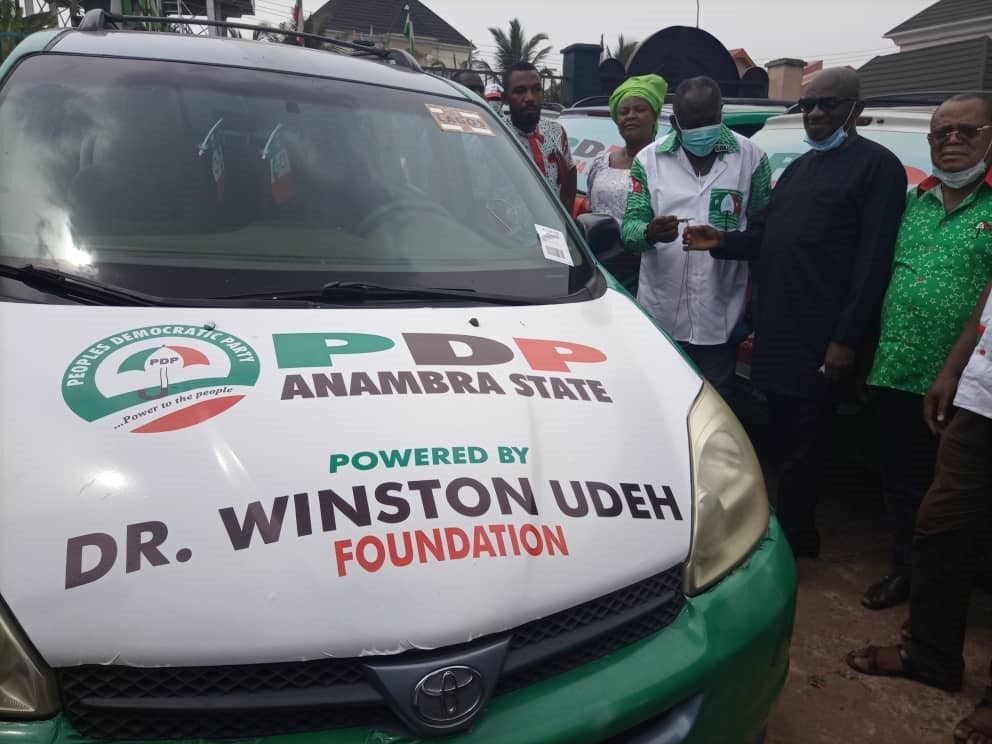 Dr Winston Udeh, in black attire, 2nd from right, handing over the keys of one of the 21 cars he donated to the PDP to the state chairman, Chief Ndubisi Nwobu, at the PDP secretariat in Awka, Feb 26, 2021.

‘This is just to make sure that whatever that the PDP needs to accomplish that goal; that we will back it up. This is just a gesture from my part for those of them. I believe that most people will form some kind of partnership with me in this journey,’ Udeh said.

Udeh, who expressed confidence that he would win the election if given the ticket of the party, said he would still strongly support the party and ensure it won the poll even if he eventually did not get the ticket.

‘I am not against anybody supporting other aspirants. I am just telling you my honest opinion because that is a contest. But I sincerely believe that if given the opportunity to represent PDP in this coming election, I will not disappoint any one of you.

‘I am 100 percent behind you and I will support every move you make to make sure that we accomplish this. I thank the members of the working committee; the excos, the local government and ward chairmen and their excos, and the PDP members,’ he said.

The chairman of the PDP in the state, Chief Ndubuisi Nwobu, commended Udeh for his gesture and assured him that the party would put the vehicles to best use.