Why You Shouldn’t Live with Hate

Hatred is a relatively stable feeling of intense dislike for another person, entity, or group. Hatred is distinct from short-lived feelings such as anger and disgust.

While some forms of animosity may only manifest briefly and mildly, hatred is a form of active, ongoing hostility that often uses up significant emotional energy. When someone feels hatred for another person, they often spend much of their time fixating on their anger, contempt, or dislike of the other person.

Why do people Hate?

Hate is part of the range of human emotions. Some researchers believe all people have the capacity to hate, while others believe true hatred is uncommon.

What does seem clear is that hatred tends to emerge as a learned emotion that flourishes in the absence of compassion. Feelings of hatred or intense emotional dislike develop for many reasons. People might begin to hate another person or group when they:

Feel envy or want what the other person has. They may consider it unfair that someone has what they lack.

Have contempt for another person or believe them to be inferior.

Learn hatred from parents, their community, or other social groups.

Are humiliated or mistreated by another person. 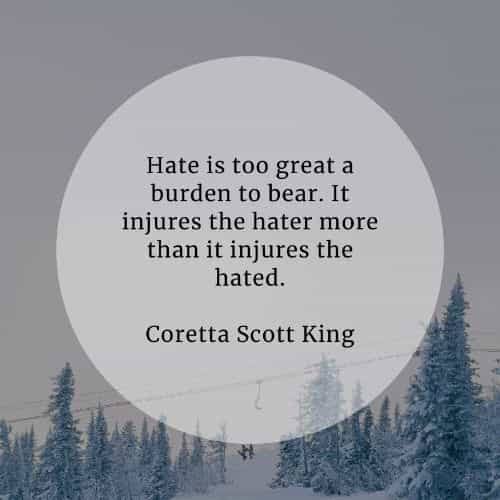 People also hate when they feel powerless. Rather than turning their anxiety and shame inward, they may project that negativity onto an external target. In some cases, people who experience bullying or abuse may grow to hate the person who harmed them.

In other cases, a target is hated more for what they represent than for specific actions they have taken. Individuals may believe the target of their hatred has harmful intentions toward them and would hurt them if they could. However, the target may not necessarily have hostile intentions, or the hatred may be disproportional to the injury.

For example, a student may hate a teacher who failed them in a class. The teacher may not have any hostility for the student and could simply be doing their job. However, the student may use the teacher as a stand-in for their frustration with academia as a whole. This hatred may prompt the student to try and harm the teacher, perhaps by spreading false rumors or sending a vicious email.

Studies on hatred suggest it tends to persist. Prolonged hatred may lead to a desire for revenge or preemptive action against a perceived threat. Some people harbor hatred for others but never act on it. Others become energized by hate and express their feelings through violent acts.

Feelings of hatred that develop toward a certain individual may eventually be redirected toward the entire group that person belongs to. This can lead to dehumanization of individuals or groups. Dehumanization is the act of seeing a person as inferior, uncivilized, or less than human.

Dehumanization research suggests that when people see others as less than human, empathy centers in the brain deactivate. For example, people who commit mass violence, cruelty, or hate crimes often rationalize these actions by comparing the victims to animals. Individuals who would typically balk at murdering another person may find it easier to kill a “subhuman” enemy.

How to cope with hatred

Coping with hatred can be difficult, especially when there’s no apparent cause for the hatred. You may wonder how someone can have such deep, negative feelings toward you. Believing someone hates you can affect your mood, mental health, and self-esteem.

If someone hates you because they feel wronged by you, it’s possible you want to reach out to them. You may wish to discuss their feelings, apologize, or make the situation clear. This could help when someone is merely angry with you, but when it comes to hatred, it may be difficult to have a calm, rational discussion with the other person.

Taking a trusted friend or loved one with you can help. Getting advice from someone unbiased (like a licensed counselor) can also help put the situation in perspective. Depending on the circumstances, it may be best not to engage the other person.

When you’ve been threatened, or even if you just feel unsafe, you may want to seek advice from law enforcement. If you’re working with a therapist, it may help to start by talking through the situation openly in a therapy session. Your therapist can help you explore helpful solutions and offer support.

Internalized hatred can cause significant harm. In some cases, internalized self-hatred results from experiencing prejudice (racism, sexism, ableism, homophobia, etc.). Negative beliefs become a part of your internal experience, leading you to judge and criticize yourself according to the stereotypes society assigns you.

Self-hatred can also result from mistakes you’ve made. If you’ve hurt a loved one and lost a close relationship as a result, you may feel painful regret. You may also come to develop hatred toward yourself.

Many people judge themselves harshly, especially when feeling guilty for something they’ve done. If forgiveness from your loved one isn’t possible, or if you’re afraid to seek it, your feelings may intensify. Self-hatred can contribute to depression. It could also factor into self-harm or other attempts to punish the self.

Remember that people make mistakes. Someone you’ve hurt won’t always be able to forgive you. However, if you regret the action, consider how to learn and grow from what happened so that you don’t hurt anyone else. Just as compassion is the key to overcoming hatred, self-compassion can help heal self-hatred.