Why Women Are Leaving the Men in Nigerian Sports

While Tobi Amusan is Nigeria’s first-ever world champion and record holder, all 12 gold medals at the Commonwealth Games were also won by women.

Fides learnt that Nigeria won 12 gold medals at the Commonwealth Games in 2022. Women won every single one of them.

The World Athletics Championships yielded two medals, one gold, and one bronze. Female athletes won both.

It was once said that it is a man’s world, but in Nigerian sports, it is a woman’s world. Why are women outperforming their male counterparts so dramatically? A woman is the first Nigerian world champion and world record holder. Shouldn’t the goal be a female president in 2023? That’s just a side note! 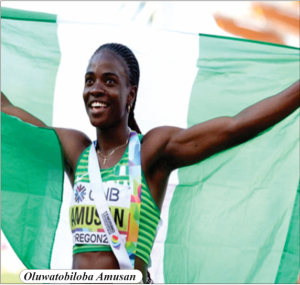 In 2022, four major international senior sports tournaments have taken place. The CAF Nations Cup in January, the Women’s Nations Cup in July, the World Athletics Championships in July, and the Commonwealth Games in Birmingham, which concluded on Monday, August 8.

A clear message from the athletes’ exploits is that Nigerian women have saved the country from international shame and embarrassment.

Sani Ndanusa, former Nigeria Olympic Committee chairman, told newsmen in London that he thinks it could be a case of dedication. ‘I think the females have been more dedicated,’ even though there is no scientific proof to back up his postulation.

‘That is a challenge to the men, to rise to the game, improve their game, and up their concentration, training, and commitment to the game.’

For former hurdler Orode Oyiki, it could just be a phase. ‘The fact is, every nation is blessed with talents at different periods. There was a time Jamaican men were more dominant than their female counterparts. Today, it’s their women in Track & Field.’

Oyiki inferred that Nigerian women are hardier than men and thus thrive better in adverse conditions. ‘Our women have fared better under the hardship we are currently experiencing.’

Despite this, Oyiki added, ‘Our men, however, need support. Women always get preferential treatment over men.’ We do not have any data to back up this statement.

Though Oyiki hopes things change for the men quickly. ‘However, we have a pool of talented young men who will blossom sooner than later,’ whilst adding that, ‘the progress of a country’s sports is directly related to the economic fortunes of the country.

‘We need funds to build sports facilities, train coaches, and manage the athletes.’

Semiu Osho, a Nigerian journalist based in London, pointed at the get-rich-quick mentality that has buffeted Nigeria’s male demography as the principal cause of the decline.

‘In terms of development of new talents, Nigeria is facing a lot of challenges with young men finding more attractions in “get rich quick” schemes, including internet fraud and crimes.

‘This is about a combination of factors, including years of poor leadership in government and also family values. Our women, though, continue to show their indomitable spirit against all odds by committing to long-term efforts and training towards greater sporting goals instead of short-term ambitions.’

A sports psychologist, Robinson Okosun, told newsmen it is neither here nor there. ‘Whatever a man can do, a woman can do better,’ Mr Okosun quipped. ‘The story of dominance by the women in sports is not primarily a Nigerian case. ‘If you look back to the 80s, Nigerian men dominated the headlines in the sprints and you can look to Jamaica to buttress that fact. Jamaican women are dominating the sprints at the moment as against the Usain Bolt era.

‘The real question we should ask ourselves is the apparent neglect of the sports development programme in the country. There used to be a synergy between the Ministry of sports, education, and state sports councils. I am a product of that synergy as I played volleyball from a young age to the university [level] before getting a Ph.D. in Sports Psychology.

‘Whether the women are doing better now is not a result of a concerted Nigerian programme. About 99% of those in our team are based abroad,” Mr Okosun added.

The rewards don’t favour the women. Despite the fact that women are outpacing men in many sports, women athletes are still paid less than men, particularly in football.

The Super Eagles, for example, receive a $10,000 winning bonus, whereas the Falcons receive $3,000. To get their allowances, the Falcons had to go on strike in Morocco before the third-place match at WAFCON.

This was not the first time the women’s football team has had to embark on drastic actions to get their dues from the authorities.

But Ndanusa revealed, ‘There is no favouritism in training and development of athletes. If you look at the prize money, sometimes the male events get more than the female, but it is different now. It has stabilised and we insist it must be the same.’

Whatever the inferences and assumptions, Nigerian women athletes are currently shining brightest, but we hope men will get their day in the sun very soon.