Why Do People Sell Their Votes

Simon Kolawole was my boss when I worked with The Week Magazine as their correspondent in Anambra. He has always come across as a brilliant writer and has been acknowledged nationally as such.

While I mulled over what to write about the situation of things in Nigeria, I found this piece below written by the effervescent Kolawole about vote buying and selling and I thought he had my job done for me. Thus I decided to share it with you. Please read on. _________________________

In ‘The Voter’, a short story written by Chinua Achebe in 1965, the legendary novelist narrated the adventure of Rufus Okeke (“Roof for short”), a famous little man in the fictional village of Umuofia. The village’s most illustrious son, Chief The Honourable Marcus Ibe, of the People’s Alliance Party (PAP), was contesting to return to the parliament.

He was the minister of culture in the outgoing (and definitely incoming) government. Roof, and the entire village, naturally had to support him. Roof was Marcus’ keyman in the campaign. But villagers had seen how Marcus’ fortune changed within five years of being in government. They were no longer going to vote for him for free.

Marcus was prepared. He gave Roof jute bags full of coins to share. On the eve of the election, Roof made a rousing speech to the elders. “We have a Minister from our village, one of our own sons. What greater honour can a village have? Do you ever stop to ask yourselves why we should be singled out for this honour? I will tell you: it is because we are favored by the leaders of PAP.

Whether or not we cast our paper for Marcus, PAP will continue to rule. Think of the pipe-borne water they have promised us,” he said and dropped two shillings for each elder. They were not as enthusiastic as he had expected. After all, Marcus did not give them money in the previous election.

Ezenwa, one of the elders, got up and declared: “We believe every word you say to be true. We shall, every one of us, drop his paper (vote) for Marcus. Who would leave an ozo feast and go to a poor ritual meal? Tell Marcus he has our papers, and our wives’ papers too. 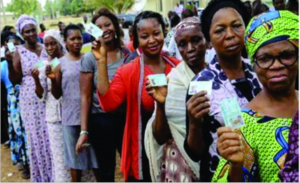 But what we do say is that two shillings is shameful.” Roof thought they didn’t see the money clearly because the room was dark, so he shined the lamp on the coins.

Ezenwa was unmoved, retorting: “Yes, two shillings is too shameful. If Marcus were a poor man which our ancestors forbid, I should be the first to give him my paper free, as I did before. But today Marcus is a great man and does his things like a great man.”

He concluded: “We did not ask him for money yesterday; we shall not ask him tomorrow. But today is our day; we have climbed the iroko tree today and would be foolish not to take down all the firewood we need.” Roof retreated, put his hand in the bag and added one more shilling each, which he put on the floor. “I am through,” he said, pretending to be defiant.

“Go cast your paper for the enemy if you like!” The elders knew they had reached the end of the bargain and quietly picked the coins from the floor. Pretending to still have some dignity left, they spoke in turns to calm the temper and rekindle the brotherhood — of course, with three shillings nestling in their pockets.

Now the twist. The “enemy” Roof spoke about, the Progressive Organization Party (POP), reached out to him shortly after with something greater than shillings: five pounds. Placing the notes on his table, they pitched: “We want your vote.” Roof said, feebly: “You know I work for Marcus.

It will be very bad…” But they replied: “Marcus will not be there when you put in your paper. We have plenty of work to do tonight; are you taking this or not?” No need to narrate what happened next.

“It will not be heard outside this room?” Roof asked.

“We are after votes not gossip,” they replied, and then made him swear to the powerful iyi deity that he would vote for Maduka, the POP candidate.

The art of inducing voters to cast their ballot in favour of a candidate, did not start yesterday. It has been with us for decades. In every election season, it is a major topic. It may yet be the most dominant topic in the 2023 elections because with the measures being put in place by the Independent National Electoral Commission (INEC), multiple voting, ballot-snatching, ballot-stuffing and vote-padding may become much more difficult.

If these measures work out well and are not sabotaged, we stand a chance of experiencing one of the most credible elections in recent memory. Politicians may be forced to rely more on vote-buying than other standard forms of rigging.

Why do people sell their votes? The general tendency is for us to blame the voters. I have observed that there is a pattern of public enlightenment campaign asking people not to “sell” their votes because they would be selling their future and the future of their children. This is a fantastic campaign. It should be preached by clerics at every service. Artistes should sing about it.

Journalists should hammer home the message at every turn. Truly, when you vote for someone because you have been induced with money or rice, you are throwing away your birth right in exchange for a mess of pottage. You have no right to turn back and complain that you are being misgoverned.

But the issues are deeper than heaping all the blame on the voter. It may amount to blaming the victims. I will explain by using Achebe’s story. We have to understand the nature and structure of politics and how it works in an underdeveloped country like ours.

People do not play politics for nothing anywhere in the world. Why our case is slightly different, as I have said in a number of articles, is that our patronage system, with its low levels of accountability, has made government the centre of amassing wealth for yourself and your cronies. To be in government is like being awarded a mining licence to accumulate wealth without work and flaunt opulence in the midst of poverty.

People play politics with different motives and for different rewards. While there are those who genuinely want to help build a better society, some just want to take control of the levers of patronage. Some aim for appointments. Some target contracts.

Some want to protect their businesses. Also, there are those who vote for altruistic reasons. But there are people on the ladder who are only interested in the cash and the rice during elections. The next time they will get anything from the candidates again is in another four years when another election is due. All promises of roads, water and electricity may not materialise but at least they got vegetable oil.

When we say 70 percent of Nigerians live below the poverty line, we do not necessarily think this has implications. But there are people in this country who wake up in the morning with no idea of where their next meal would come from. This I know.

There are people who have lost loved ones because they could not afford drugs as cheap as N1,000 or pay for diagnostic tests, which are even more expensive. There are homes where parents and all the children are crammed into one room. That is the definition of poverty. When some of those who cannot feed their families get a small bag of rice at election times, we hope they would turn it down so that they won’t be selling their future.

Many voters are asking: what future are you talking about? Won’t I survive today first? Does it even mean if I vote for a candidate that does not give money, he or she would automatically do well in office? There is no such evidence. I recollect how the Alliance for Democracy (AD) swept the south-west in the 1999 Elections.

The Peoples Democratic Party (PDP) shared plenty money but the voters either rejected the inducement or collected it without voting for them. In the end, only a few AD governors and lawmakers did well in office although they did well for themselves. As in the case of Chief The Honourable Marcus, AD supporters started demanding money in subsequent elections.

This brings me to the point at hand. Marcus was an ordinary son of Umuofia before he joined politics. He was a not-too-successful mission school teacher. Five years later, Chief the Honourable had acquired two “long cars”. He had built the biggest house in the community, which he named “Umuofia Mansions”. He slaughtered five bulls and countless goats at the “housewarming” presided over by the Archbishop.

There was no running water or electricity in the village, so Chief the Honourable installed a plant in his mansion. Everyone praised him. “Our son is a good man; he is not like the mortar which as soon as food comes its way turns its back on the ground,” one old man said.

But this made people discover the power of their vote. You mean our vote can turn a school teacher into an owner of “long cars”? Actually, voters are not blind: they see all these things. They see how politicians who used to live in their family houses start acquiring property in Banana Island after getting into office. They see people who used to take night buses to Abuja now flying private jets.

They know that their votes matter. When these guys come around during elections, many voters expect frontloaded rewards because that is usually where the intercourse ends. Voters who are vulnerable think they can at least attend to existential needs for now; the future can wait.

We started this story with Roof and we must end it with Roof. After collecting Maduka’s money and swearing to the iyi deity, he was confronted with a dilemma when he entered the polling booth to cast his vote on the election day. How could he betray Marcus, even in secret? But why would he return the money to Maduka? The whole of five pounds?

He took so long in the booth that the policeman had to ask the presiding electoral officer: “Abi na pickin im de born?” Roof eventually folded the ballot paper, tore it into two and dropped one each into the boxes for Marcus and Maduka. That way, he thought he had satisfied his conscience and pleased both sides.

Today’s voters do not seem to suffer the Rufus Dilemma. Some will collect money from whoever offers it. Some will attend any rally to share from goodies. But I am convinced that most already know where they are going, with or without inducement.

In fact, inducement is just an icing on the cake for them. Thus, to my question, “Why do people sell their vote?”, my takes are: one, many really need the money; two, they can still vote for their preference; three, they want upfront dividend from the would-be political billionaires. Hence, campaigns against buying and selling votes may continue to yield little results. Still, it’s a message we must keep preaching loud and clear.