Who Did This to Us?

In trying tom restore sanity on the roads, one of the punitive measures introduced by the Anambra State Government under Prof Chukwuma Soludo, against traffic defaulters is, apart from paying a prescribed fine, to have their heads examined at a psychiatrist hospital to ascertain their mental health.

This is because the Anambra State Government believes only mad people can be breaching certain traffic rules like driving against the flow of traffic and causing accidents.

In the same vein, I have come to the conclusion that there are certain things our people do on a daily basis that call to question the state of their mental health. It is two of these things that I have decided to take a peek at this week. Indeed, one of them that always confounds me is our attitude in emergency situations to human beings needing our help.

You see people or those who call themselves people, striving to take photos of dying people in an accident, rather than hurrying to save them. They fall over themselves to be the first to take pictures of the dying and post on social media, even if the accident victims are crying out to them for help. As we say here, no be juju be that?

Highway to Death by Bianca Ojukwu

Yesterday, 19th November, 2022, on my way back from a wedding ceremony, late afternoon, I stumbled upon a horrific accident scene at the Ugwu Onyeama, Enugu Expressway. A tanker had just collided with a coaster bus carrying passengers who were on their way back from an event.

Mangled bodies covered in blood were strewn everywhere. People had clustered around the scene and the sight was traumatic . I had to make a split second decision whether to move on or to stop. I noticed one of the victims was moving, and requested my drivers to stop.

I alighted from my vehicle with my aides, including those in my back up vehicles and approached the scene. To my shock and dismay, most of the people standing around there, who just parked their own cars by the side of the expressway, were simply busy with their cell phones, taking pictures and making videos of the gruesome incident.

We literally had to fight many of them away from the scene, especially some heartless souls with their phones held up at point blank range against the faces of victims, recording their agony and their dying groans. 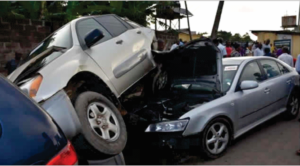 I noticed more of the victims were breathing and we tried to get motorists who were slowing down, purely to watch the horror, to help us to transport the victims to the nearest hospital to no avail. They would slow down, peek and pass.

I made my way to the victim that first caught my eye, a lady who appeared unconscious but was moving her hand. When I approached her, and she heard my voice, all she could mutter was, ‘biko, jide m aka’ (please hold my hand). I assured her she would be ok, the lady lying beside her, also dressed in the same uniform, was groaning in intense pain.

No emergency medical response services in sight, not even Road Safety officials. I noticed a young man who introduced himself as Stanley Egbuonye from Obosi with his two relatives, and another lady, Mrs Ambrose Egbosimba, who were equally scouting for good Samaritans to transport survivors to the nearest hospital. Nobody else seemed willing to help. Some were even trying to avoid my eye and my pleas as they snaked their way past the gory scene.

Together with Stanley and his two co-travellers, we lifted several of the victims into our vehicles and headed for the hospital. The road was blocked with traffic but we eventually got there. The hospital staff swung into action and battled to save those that were still breathing. Most of them did not survive.

It was tough to keep answering calls on their handsets…worried relatives wondering why they had not yet returned, and having to inform them of the accident, and to start heading out to the hospital, but unable to tell them their loved ones had passed on.

We left the hospital late in the evening as some of the bodies were being conveyed to the hospital mortuary. Only God knows the fate of the already dead victims at the accident scene as we were trying desperately to save those that were still breathing.

I am yet to recover from the trauma of this incident, the thin thread between life and death and the callousness of everyday people to the plight of other human beings in distress.

The raw reality of the third world hits whenever situations like these arise. The highest point of civilization is the consideration, empathy and compassion for the other. Any country where functional emergency services or basic ambulance services is considered a luxury or even unattainable in this 21st century remains ‘underdeveloped’, not ‘developing’. It is as simple as that.

This could have happened to anyone. These were gaily dressed guests, many joyfully resplendent in their uniforms, probably happily chatting together in their hired bus returning from a function, but never made it home.

I keep replaying the voice of the victim who, all she requested of me (a total stranger who she could not even open her eyes to see at that moment), believing she was about to make her transition from life to death, was that I hold her hand.

The loneliness and fear that grips every living soul at that critical moment of departure from this world hit me hard. I consider it a sacred privilege to have been there for her. She did not make it. Only God knows why I was on that highway at that material time when I could have chosen other routes.

Until we get our accident and emergency response facilities right in this country, we are all watching a ticking time bomb. Yesterday it was them, today and tomorrow…who knows who might be the next victims?

Insofar as we all live in this country and do not mandate our governments to make this a priority, it will be turn by turn…

I wish the injured speedy recovery. May God come to their aid.

We have seen the lunacy being displayed by people in the name of taking pictures and rushing to post on social media. Where, indeed, lies our humanity? At what point did we suddenly change from human beings to beasts? If the above attitude is worrisome, what do you say about this next one I’m going to write about?

Only Mad People do not Want a New Nigeria

In less than three months time Nigerians will troop out to elect their next president. The three major contenders are Bola Ahmed Tinubu of the ruling All Progressives Congress, APC; Atiku Abubakar of the main opposition People’s Democratic Party, PDP; and, of course, Peter Obi of the Labour Party. And here’s where the story begins…

Tinubu and Atiku represent the oppressive class which has for years pinned Nigeria down. They are the face of corruption, with Tinubu lately being exposed as a drug lord. In contrast, Obi comes as a breath of fresh air without any excess baggage.

Since he left office over eight long years ago, all attempts to have him indicted for any corrupt practice have been hitting the floor. He is, perhaps, the only Nigerian leader that is as clean as a whistle so long as governance is concerned.

The former two were part of the parties that crippled Nigeria (PDP and APC). Both of them combined are no match to Obi in any way; be it education, integrity, real capacity and vision.  Today, Nigeria is almost finished as an entity and merely awaiting confirmation of her death by the doctor.

Under the present government at the centre, Nigerians are sleeping with poverty, depression and hopelessness. The prices of everything have gone astronomically up and what is now left is for people to start raiding homes and restaurants to run away with pots of food.

On top of that is the insecurity in the land that has made the country among the most dangerous to live in. on the road, if any vehicle suddenly overtakes you, you feel like jumping down and running into the bush because you fear they may be kidnappers.

The only hope of a better tomorrow for Nigerians is just Peter Obi. He represents the only hope because he is the only one of the major candidates that does things differently. It is therefore expected that every Nigerian will be working towards having Obi as Nigeria’s next president. But horrifyingly there are still Nigerians who see Atiku and Tinubu as the answers to our problems, simply because of the crumbs falling from their tables which those people scrounge on.

These are the people who also need to visit a psychiatrist. I say this because no normal Nigerian will want to see anything resembling either APC or President Muhammadu Buhari next year; even Atiku and his PDP gang. My support for Obi, as I’ve always stated, is not because of the man, Obi, per se, but because of what he represents.

He is the only solid vehicle through which what remains of Nigeria can drive over the ever widening precipice. This means that I would have supported any other person that could have saved us from the impending doom.

But, no; some Nigerians are dancing with death in the name of supporting Atiku and Tinubu for the sake of a few Naira notes. But what they have failed to acknowledge is that should things continue the way they have been, such people will have nowhere to stay to enjoy their loot unless they will permanently leave Nigeria and also drag their parents and relatives along with them to avoid a backlash from angry Nigerians.

So for the fact that some Nigerians want to remain in their misery, I’m constrained to ask: who did this to us? I only pray that the good lord looks upon us with pity and give us a saviour next year.