It is of common and general knowledge in Nigeria, of which courts have taken judicial notice thereof, that there has been an alarming increase in the seizure of Nigerian Passports of citizens by officials of State Security Services (SSS).

Most of us are aware that there is the inscription at the back of the Nigerian passport that the passport is the property of the Government of the Federal Republic of Nigeria and may be withdrawn at any time. It is, however, very important to note that the aforesaid inscription is not a licence to any official of State Security Services (SSS) to withdraw, seize or impound same.

A passport is a certificate of identity and nationality and at the same time a request from one state to another to grant entry to the bearer, it stands to reason that a passport is normally an essential document in the exercise of the discretion by a foreign state, which at international law it has in the reception of aliens into its territory. To that extent a passport is normally an essential document for entry into foreign countries.

Possession of a passport in modern times makes exit out of Nigeria possible. The issue that follows from this conclusion is whether the possession of a passport or its withdrawal has any relevance to the constitutionally guaranteed freedom of movement, including the right of exit from Nigeria, with which this article is directly concerned.

The freedom of exit guaranteed by our Constitution cannot be exercised without a passport and the freedom of movement as enshrined in Section 41(1)  of  the  1999 Constitution of the Federal Republic of Nigeria as amended carries  with  it  a concomitant and inseparable corollary of the right of exit of every citizen of Nigeria out of Nigeria on evidence of possession of a valid and subsisting passport. 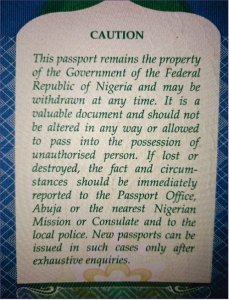 It is inconceivable, whether factually or by right, that a right would be given and the essential facility for its effectiveness would be denied. An executory right, such as the right of exit, carries with it the rights necessary to its effectiveness and there is a corresponding duty on the State to provide the facilities under Section 38(1) of the 1979 Constitution which is now Section 41 of the 1999 Constitution as amended and also under Article 12(2) of the African Charter on Human and Peoples’ Rights (Ratification and Enforcement) Act, Cap. 10 of the Laws of the Federation of Nigeria, 1990.

Section 41 of the 1999 Constitution as amended provides as follows:

“(1) Every citizen of Nigeria is entitled to move freely throughout Nigeria and to reside in any part thereof, and no citizen of Nigeria shall be expelled from Nigeria or refused entry thereto or exit therefrom.(2) Nothing in subsection (1) of this section shall invalidate any law that is reasonably justifiable in a democratic society

(a) imposing restrictions on the residence or movement of any person who has committed or is reasonably suspected to have committed a criminal offence in order to prevent him from leaving Nigeria; or

(b) providing for the removal of any person from Nigeria to any other country to:- (i) be tried outside Nigeria for any criminal offence, or (ii) undergo imprisonment outside Nigeria in execution of the sentence of a court of law in respect of a criminal offence of which he has been found guilty: Provided that there is reciprocal agreement between Nigeria and such other country in relation to such matter.”

It is however only the Minister of Internal Affairs that has right to cancel or withdraw any passport based only on the conditions provided in Section 5(1) and 5(2) of the Passport (Miscellaneous Provisions) Act, 1985 which provides thus:

“5. (1) The Minister may, at any time, cancel or withdraw any passport issued to any person if-

(a) the passport is obtained by fraud;

(b) the passport has expired;

(c) a person unlawfully holds more than one passport at the same time;

(d) it is in the public interest so to do.

(2) The number of the passport, name and particulars of the holder of any passport withdrawn or cancelled pursuant to the provisions of subsection (1) of this section shall be published in the Federal Gazette.”

The seizure of passport by a government agency such as the officials of State Security Service (SSS) is not only unlawful as it is not part of their statutory duties but it can be interpreted as a direct expression of refusal of exit to the citizen, it is also a potent curb on the desire of the citizen to travel abroad and an evident clog on the exercise of his right of freedom of movement. 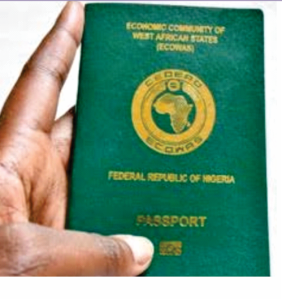 The duties of the officials of State Security Services (SSS) are spelt out under Section 2 subsections (3) and (4) of the National Security Agencies Act which provides as follows:

“2(3) The State Security Service shall be charged with responsibility for- (a) the prevention and detention within Nigeria of any crime against the internal security of Nigeria; (b) the protection and preservation of all non-military classified matters concerning the internal security of Nigeria; and (c) such other responsibilities affecting internal security within Nigeria as the National Assembly or the President, Commander-in-Chief of the Armed Forces, as the case may be, may deem necessary. (4) The foregoing provisions of this section shall have effect notwithstanding the provisions of any other law to the contrary, or any matter therein mentioned.”

These provisions cannot, by any stretch of imagination, be interpreted to empower the officials of the SSS to seize, impound or withdraw a citizen’s passport.

The most instructive case on this point is the Supreme Court case of DIRECTOR OF STATE SECURITY SERVICES & ANOR V. OLISA AGBAKOBA (1999) LPELR-954(SC) which was decided by the Supreme Court based on Section 38(1) of the 1979 Constitution. The respondent was a holder of a Nigerian passport which was impounded by an official of the 1st Appellant. The 2nd Appellant is the Attorney-General of the Federation.

The Supreme Court also held that the statement on the Nigerian passport that ‘a passport may be withdrawn at any time’ is neither in accord with the Constitution nor with any law applicable in Nigeria as same is inconsistent with the Constitution of Nigeria and the Passport (Miscellaneous Provisions) Act, Cap. 343 Laws of the Federation of Nigeria. Such a statement which does not now represent the law should now be modified to reflect the true state of the law.

The 1st Appellants also failed to understand that in the name of maintaining national security or protection of national facilities, they cannot be allowed to ride rough shod on the same public they are meant to protect, and to stampede, harass, intimidate, assault, batter and impound the passports of citizens.

The 1st Appellant and its leadership are established and regulated by law and must act within the confines of the law in the exercise of their discretion; they cannot be arbitrary, excessive or overzealous in service, to undermine the constitutional and fundamental rights of the members of the public they are enjoined to protect, defend and serve. The concept of national security and national interest should always be interpreted and operated in the context of service to the people and the protection of their legitimate interests, rights and aspirations.