When Agitation Becomes an Absurdity

I have always striven to ensure that I don’t get swayed by the crowd, no matter how loudly they shout or how popular their cause is perceived to be as long as I don’t see any good in it. That is exactly why I have refused to be part of the brand of agitation by some of our brethren for the declaration of a State of Biafra. How could I, when I’m almost sure that many of the raucous voices are actually unaware of what they are supposedly fighting for?

Last Tuesday, something that happened in Onitsha once more added fillip to my position. It was in the early morning of that fateful day when some parishioners of St Theresa of Calcutta had gathered in the church for Morning Mass. But as the Mass went on, lo and behold, a group of young men wielding sticks and carrying a container of fuel stormed the church and proceeded to harass the worshippers, querying why they should be attending Mass on a day their leader, Mazi Nnamdi Kanu, was appearing in court in Abuja (not even in Onitsha).

Expectedly pandemonium broke out as the worshippers ran for their lives. It however took the intervention of the priest to calm the attackers down after explaining to them that the Mass was also dedicated to having Kanu freed. It was then that they tried to call back those who had run away. Chances are that they would have set fire to the church had they not been calmed down by the priest. That did not stop them from setting fire to a tricycle (keke) after they left the church.

Before now, there had been attacks on people deemed to have defied the sit-at-home order, with their property also often destroyed. But all those attacks had been on the streets; never inside a place of worship. 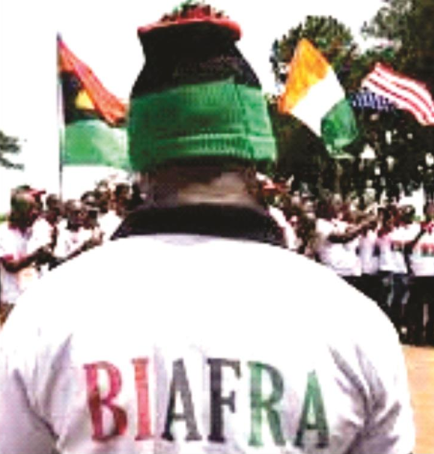 But even then, we had tried to point out that it was never right to force people to toe a path they don’t believe in and that has been the beauty of democracy since Adam. But here people are being railroaded into what they do not believe in or support its modus operandi and that is very, very wrong. For the fact that this is happening at all, goes a long way to showing the kind of people behind the noise. I’ve indeed often wondered if many of those shouting Biafra really understand the word or what it stands for.

Yes, they will readily tell you that Ndigbo are marginalized but they also fail to agree that they themselves are now marginalizing the Igbo Nation and people full time, by their mindless actions. Are these not the same people who jacked up transport fares during the last yuletide even when the price of petrol was not increased?

Are these not the same people who charged as much as N25, 000 to transport passengers by road to the east? Are they not the same folks that charged N21, 000 to take their kit and kin down to the east from Lagos? Yet, while fleecing their brothers and sisters they shout Biafra! Biafra!

But, perhaps, when one considers that the majority of the crowd behind the agitation are found among artisans, one can easily understand why they think and act the way they have been doing. And dealing with such people is usually very dangerous because they are too rigid and fanatical in their beliefs and usually see dissenting voices as enemies. They are the sort of people that act before they think.

That explains why people who call themselves human beings could invade a church with cans of petrol and sticks to drive worshippers away.

When these things are discussed here, many still fail to see where we are driving at. What can be more foolish than setting fire to our house (Igbo Land) to spite our enemy (Federal Government), or so they believe? Why do we fail to see the dangerous direction we are headed?

Wasn’t this the exact same way it started in Bornu and eventually spread throughout the North East? Haven’t we seen how they are today running helter-skelter without knowing how to put out the fire they could have put out years ago when it was still a smoke? This is the situation some people want to bring to the Igbo Nation by willy-nilly supporting what clearly is a time bomb. I dare say that those supporting their mode of operation are the greater enemies of the Igbo Nation. They shouldn’t look too far for where the enemy lurks.

The other day, First Republic politician, Chief Mbazulike Amaechi, had reportedly threatened to withdraw his support for IPOB if it did not entirely suspend its sit-at-home directives as it was not only hampering the release of their leader, Kanu, but was also hurting the Igbo Nation economically and socially.

People who had activities on Mondays after the new year had difficulties coordinating them because of the unavailability of transport if they happened to operate within Ekwulobia, Onitsha or Ihiala.

Because of this sit-at-home stuff, some of our children had missed their English and Mathematics papers in WAEC. On one occasion in Imo State, students and their teachers were sacked from their school by those enforcing the sit-at-home order. Even now, whenever there’s a rumour of sit-at-home, many schools do not open and this means that our children are forced to skip lectures while their counterparts in other regions are in school. Who loses in the very end? Us or them?

But no matter how you try to get across this point to those behind this, they will not listen. Not even after the mainstream of IPOB had repeatedly declared that Monday sit-at-homes had been suspended.

IPOB had also warned those ”enforcers” to steer clear or be declared enemies but it has not stopped them. The other Monday, some vehicles were smashed at the famous Four Corner spot in Oji River, while two Sienna buses were burnt in Enugu and Ekwulobia in Anambra.

So, what has setting fire to buses or beating up fellow brothers and sisters achieved? Indeed, would it be helpful or injurious to the plight of Kanu who is facing trial in Abuja on charges of treasonable felony? Won’t such actions in the east further show proof to those after Kanu that he and his organization are really terrorists?  Who would blame Dara Mbazulike Amaechi for getting angry at what is obviously the continued stupidity of those behind the carnage?

Ndi Igbo are known for wisdom and hard work but those behind these shenanigans are far from wise and hard working. In fact, what I’m seeing is a situation where those who have lost their opportunities in life by their lack of focus and discipline are now trying to drag every other person down with them to their sordid level.

These are the crowd who force people to stay home and shun their legitimate means of livelihood. Indeed, it is not likely that any hard working young man will be ready to close shop for days in pursuit of a cause that doesn’t seem likely to be realized any time soon.

But those who are worth nothing and are brainless allow themselves to be brainwashed. The other day somebody told me how some young men were talking glibly about how a fully armed strike force was waiting on the shores to attack Nigeria if they failed to release Kanu last Tuesday.

How anyone could believe such trash really beats my imagination but that tells you the kind of people behind the agitation. That explains why they are ready to maim, loot and kill, once they receive an order from ”above”. And mark you, ”above” can mean anyone they fancy.

But while the actions of this category of people are bad enough, methinks that those of the people who support them despite knowing better are worse. These are people who are more experienced and who know the truth deep down but fail or refuse to tell the truth to those whose brains are easily manipulated.

The danger of not telling them the truth is that even though you think you are not their target today, tomorrow you may find yourself staring down the barrel of a gun and that is when you will understand the dangerous power of the mob. Perhaps, this is what the mainstream IPOB are seeing today.

Despite frequently issuing orders that the sit-at-home strike has been suspended, those down the line who have metamorphosed into cells, are refusing to comply. Among them are ex-convicts and jail breakers, who, armed with guns, see more and better opportunities in using those guns for other purposes away from what they were initially told.

This is why we have been hearing and reading cases of kidnaps. But on top of it, they are now daring enough to attack churches. Who knows what they will do tomorrow?

There is no doubt that what was initially an agitation has turned into an absurdity – no thanks to the senseless manner some people are pursuing it today. We can yet salvage the situation but that will only happen if we begin telling ourselves the truth about how best to pursue this Biafra business.