When a People Lose Faith in their Security

A bad government creates unlikely heroes by its actions. That Chief Sunday Adeyemo, a.k.a. Sunday Igboho, is today in the national conversation is down to, not just the Federal Government’s total failure to protect the life and property of Nigerians, but its open display of favoritism to a clearly criminal and murderous group at the expense of the rest of the country.

For some years now the blood thirsty Fulani herdsmen have been on a killing spree against innocent citizens of the country, with the Federal Government of President Muhammadu Buhari doing nothing to halt the bloodletting. Even with the murderous herdsmen being described as the fourth most dangerous terrorist organization in the world, Buhari is yet to lift a finger against them but would quickly move against those who have ”dared” to fight back. 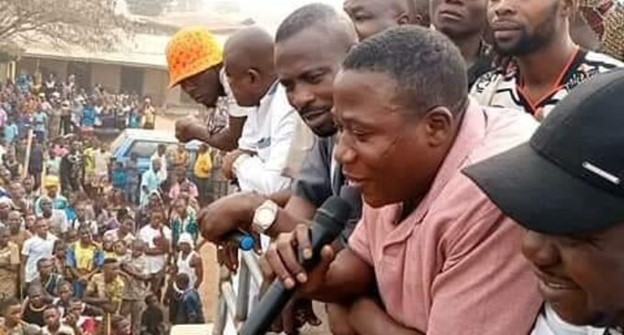 Sunday Igboho (2nd from right, with microphone), addressing hundreds of his supporters. President Buhari’s security lapses has turned Igboho into an overnight hero in Ondo State.

That was the situation in Ondo State after one Sunday Igboho delivered a one week ultimatum to Fulani herdsmen to leave the state from the bushes where they have been camping and unleashing terror on their host communities.

Igboho had hardly finished talking when the Federal Government ordered the Inspector General of Police, IGP, to arrest Igboho. Yet, this was not the first time anyone or group would issue such a quit notice against some people.

In 2017, a group of scallywags masquerading as Arewa Youths, had issued a quit notice to Igbos living in the northern parts of the country. No arrest was made, with even the leaders of the group appearing on a live television programme to defend their position.

But when a similar notice was served on a group that has been actually killing, raping and kidnaping people in their own homesteads, the Federal Government of Buhari quickly rose to their defence. It is this double standard that has put the country in its current social disharmony.

To say that the country has never been more divided along ethnic and religious lines, is to state the very obvious. And Buhari’s open identification with one group to the detriment of others has not and is not helping matters.

It is this perception of double standard that has driven some sections of the country to make their own security arrangements. That is why today we hear about Amotekun in the west and about the one floated by the Indigenous People of Biafra, IPOB, in the east.

On top of that, individuals are even taking it upon themselves to take preventive measures against attacks by the herdsmen. That is where we are today in the west, with Igboho leading the charge against the herdsmen in Ondo State.

When such things happen, the end result will always be chaos. Those attacked will fight back and before one knows it, anarchy sets in across the country.

It is bad enough that the country’s security apparatus has been incapable of protecting the citizens but it is far worse; even annoying, that a particular group of criminals have become sacred cows – the Fulani herdsmen.

When it is remembered that no single one of them has been prosecuted and brought to justice, it leaves the citizenry with no option than to take their destinies in their own hands and that is what is playing out in the western part of the country today and no one is surprised.