The 2021 Anambra governorship election has come and gone, although the dust has not yet settled owing to the likelihood of litigation by one of the candidates, Senator Andy Uba.

While most of the other candidates had congratulated the winner, Prof Chukwuma Soludo, immediately after he was declared the winner by the Independent National Electoral Commission, INEC, a couple of them, including Uba, kept mum. But days later, Uba gave a hint that he would be heading to the tribunal. It was a development that is not helping his image which already has received much battering.

As I noted in this column last week, the Uba Brand is anathema in Anambra State and it was almost like an eighth Wonder of the World that his party, the All Progressives Congress, APC, chose him as its standard bearer. For those who may have forgotten, the name, Uba, was synonymous with the burning of the state’s patrimony in 2004 in what has infamously been tagged the 2004 Mayhem.

It refers to the siege laid to Awka by ”forces” loyal to the Ubas as they tried to instigate a state of emergency that they hoped would be declared so that the governor at the time, Chris Ngige, would be removed and an administrator put in his stead. Of course, having being receiving covering fire from Aso Rock, that administrator would have been one ready to do the bidding of those behind the mayhem. 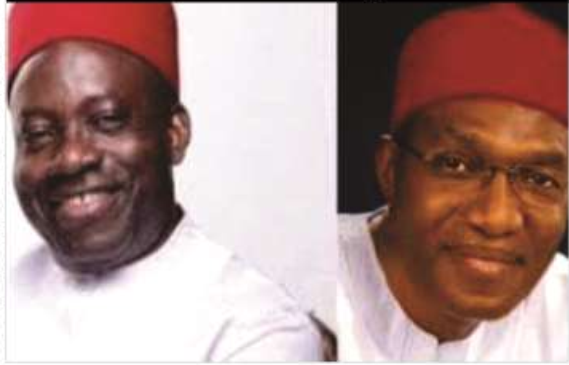 The aftermath of those attacks left the state capital like a city devastated. The government House was burnt, a major building at the state broadcasting station was also burnt. The office of the State Independent Electoral Commission, SIEC, was also burnt. It was indeed a dark period in the state’s history.

Andy Uba was believed to be the unseen hand manipulating things in Awka from Aso Rock. The idea of the mayhem, it was generally believed, was to make his journey to the seat of power easy after the emergency rule would have been imposed. But somehow, things didn’t work out that way and Ngige became the cat with nine lives and stayed on.

Since then the Uba Brand has been an unsellable one and that brand was not done any favours when it was again behind the unlawful impeachment of then Governor Peter Obi and later, his disqualification along with some other candidates from contesting the 2007 governorship election. Uba succeeded in getting into Government House but it lasted only 17 days before fate dealt him another blow and he left office in ignominious circumstances. The Uba Brand yet again received a hit and further became a name few wanted to hear about in the state.

This was why many were surprised when APC went back to that brand as a vehicle to take over the seat of power in Awka in the run up to the recently concluded governorship poll in the state.

Despite adopting a tsunami-like approach in the campaigns by buying off members of opposition parties, the party, APC, still ended up a distant third which was even a surprise as, his party, being that of the unpopular government of President Muhammed Buhari, was one nobody in their right senses in the east wanted to associate with.

But despite getting a good hiding in that election, the party’s candidate has refused to accept defeat which everyone knows was well deserved. He has been hinting of going to court to challenge it and that hint is not going down well with many people here who see it as further proof that he never means well for the state. The question is, if the person who came second has decided to move on, how come the one that came third is still spoiling for war? This stance of Andy Uba is only serving to alienate him further from the people of the state and it appears to be dawning on him.

Last Wednesday he released a statement in which he denounced those he called mischief makers by upbraiding his recourse to the courts to seek redress. The press statement is republished below:

The candidate of the All Progressives Congress, APC, in penultimate week’s governorship election in Anambra State, Senator Andy Uba, has lashed out at those intent on continually defaming him, describing them as being fearful of his mere shadows.

In a statement signed by Hon. Victor Afam Ogene, Director, Media and Publicity of his campaign organisation, the Senator wondered why several days after the polls, his opponents, especially members of the All Progressives Grand Alliance, APGA, still find it fashionable to conjure all manner of falsehood in his name.

The election has come and gone and we are in the process of interrogating the sanctity of its outcome. But instead of gearing up for the expected judicial battle ahead, APGA as a party and its leaders are busy trolling my person, in the mistaken belief that their underhand tactics would make me back out of my chosen course of action.

I have only decided to take a civilised course of action, which is a recourse to the judiciary in the face of daunting illegalities that trailed the conduct of the elections. How this is so discomfiting to some, leading to the sponsorship of several false stories about my person, beats the imagination of all reasonable members of society.

While leading members of APGA and their supporters gallivant from one television station to another, spending resources belonging to our state in undisguised attempts at demonizing Senator Uba, the propaganda wing of the party does the same by busying itself churning out one badly cooked story after another.

In one of such fairy tales, a nondescript online rendezvous claimed that Senator Uba was lamenting that Governor Hope Uzodinma of Imo State was no longer picking his calls. Nothing else could be farther than the truth, as it is public knowledge that as Chairman of the APC National Campaign Council, Senator Uba owes the Imo State Governor a huge debt of gratitude for his support and leadership roles in the electioneering process.

Indeed, we regard this foolish tale as part of a deliberate ploy by APGA to get as many APC chieftains as possible at odds with Senator Uba. The first, we recall, was the infantile story of dragging the Anambra State Deputy Governor, Dr. Nkem Okeke, before an imaginary deity, and then an attempt at casting aspersions on the image of Distinguished Senator Stella Oduah, for the simple reason that she decided to pitch her tent with us in the APC.

Although we are quite aware that several of such devious propaganda materials have been made ready for dissemination, we urge discerning members of the public to disregard same whenever they summon the courage to push them out, believing, as we do, that in the final analysis, justice shall be last served.

Now, after going through the report, I had this feeling that some people may actually be goading Uba to go to court. I had this feeling because I never saw how Uba was rigged out, especially when he belongs to a party that ”owns” INEC and he is even the chairman of the senate committee on INEC.

Now, everyone in Nigeria knows that when it comes to rigging, it is almost impossible for the party in power to be rigged out, except it allows it by its inaction as in the case former President Goodluck Jonathan.

Before the last election, genuine fears were raised about APC’s plans to thwart the mandate of the people. It wasn’t helped by boasts from their camp about how they would take over the state. But suddenly after the election, the ones boasting became the ones complaining. How odd!

There is a point in life when one has to accept defeat or rejection. APC cannot force love down the throats of people here. They simply don’t want them. By deciding to go to court even when the party’s rejection is clear, Andy Uba is not doing his name any good. Rather, he is driving the nail further into his political coffin.

Those giving him this advice do not like him. Perhaps if he had immediately, like others, congratulated the winner, the people might have begun to see him in another light.

But by taking his current stance, he is only proving the people’s perception about him right and that perception is that of a desperado.

It just doesn’t sound good at all.