WHAT IS THE EFFECT OF AN UNSIGNED DOCUMENT IN LAW?

Unsigned document is any document that is not signed in any way, form, manner or style.

The term signature is generally understood to mean the signing of a written document with one’s own hand. However, it is not critical that a signature actually be written by hand for it to be legally valid. It may, for example, be typewritten, engraved, or stamped.

Usually, a signature is simply someone’s name written in a stylized fashion. All that needs to be there is some mark that represents you. It can be  a simple mark for people who couldn’t read and write. As long as it adequately records the intent of the parties involved in a contractual agreement, it’s considered a valid signature. 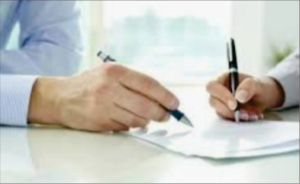 Usually this mark is made by a pen, but not necessarily. The signature can be made by anything that marks the paper. Pencil is not favored because it can smudge and be erased, but a signature made with a pencil is equally valid as a signature in pen. Like I said before, signatures can also be made with stamps or with electronic means, since these are all different forms of writing implements.

If you are unable to sign the contract or letter yourself, you can always give someone, called an “agent,” the authority to sign on your behalf.

“The court cannot in any event ex debite justitiae, ignore a situation in which the foundation of a claim to a preparatory legal interest are based on a worthless, unsigned and inadmissible document.”

“It is well settled that an unsigned document is worthless and void.”

In the Supreme Court case of Omega Bank (Nig) PLC V. O.B.C. LTD (2005) LPELR-2636(SC), a document admitted by the lower court as Exhibit P6 was material to the appeal. Exhibit P6 was an unsigned internal memo of the appellant to the Controller Owena Bank (Nig.) Plc, Akure.

The exhibit was purportedly written by J.O.O. Mirza Nahim Ali, Controller Central Foreign Exchange and E. Odugbesan (Mrs), Manager Central Foreign Exchange. It was not signed by any of the makers or writers. The main plank of the submission of learned Senior Advocate for the appellant, Professor Taiwo Osipitan, is that Exhibit P6 was not signed and therefore inadmissible in law. 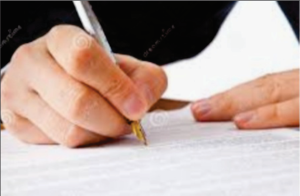 The learned Senior Advocate for the respondent, Mr. L.O. Fagbemi did not agree with the submission of Professor Osipitan. He submitted that in deserving situation, the requirement that a document is to be signed by the maker is only to ensure the genuineness of the document and not leaving any matter in doubt.

The Supreme court, per Niki Tobi, J.S.C, held in the aforementioned case as follows:

“A document which is not signed does not have any efficacy in law. As held in the cases examined, the document is worthless and a worthless document cannot be efficacious.”

An Affidavit also shall be signed by the deponent to be valid in accordance with Section 117(4) of the Evidence Act, 2011.

Section 117(4) of the Evidence Act, 2011 provides that an affidavit when sworn shall be signed by the deponent or if he/she cannot write or is blind, marked by him personally with his mark in the presence of the person before whom it is taken.

An unsigned letter may be bolstered by follow up emails and text messages to give it credibility and evidential and probative value.

In the aforesaid case, both Grant and Bragg had formed a company and entered into a buy-sell agreement (a.k.a. share agreement) pursuant to which either shareholder could buy out the other at a set price based on a formula in the event of a dispute.

Needless to say, a dispute arose and Bragg offered to buy Grant’s shares. Although a formal written contract was prepared by a law firm, neither party had signed it and both parties appeared to be continuing negotiations. However, the Court found that Bragg had already seized control of the company and that the email exchanges between the parties at the time were sufficient to bind them to the essential terms of the draft contract prepared by the law firm.

‘The point has to be made that the requirement of signature is made by the law to determine its origin and authenticity with regard to its maker and so where certain situations exist an unsigned document could be admissible as in this instance where oral evidence clarifying the document and its authorship as in the case at hand thereby rendering such an unsigned document admissible.

This unusual but allowable exception to the general rule was well explained in this court in the case of Awolaja & Ors v. Seatrade G. B. V. (2002) LPELR – 651 per Ayoola, JSC as follows: “A signed document though valuable as putting its beyond peradventure what terms the parties have agreed to is not essential to the existence of contract of affreightment where the immediate parties to the agreement do not deny their agreement or existence of the contract of affreightment and there is no doubt about their intention that they should be bound, barring statutory provision to the contrary, (and none has been cited by the defendant) the existence of the contract cannot be impugned on the ground that the document embodying the terms they have agreed to was unsigned, unless the parties have made such a condition of their being bound”.

It is therefore important for parties engaged in contract negotiations to: (1) refrain from performing any work until a final written contract is prepared and executed; and (2) ensure that all pre-contract correspondence contains a statement that any deal is “subject to the execution of a signed written contract.”