Shortly after the immediate past Anambra State Governor, Chief Willie Obiano, assumed office way back in 2014, I had written a kind of open letter in which I advised him to beware of praise singers. I noted that my advice stemmed from what I had already started seeing about his persona which showed him as one who loved praise and adulation as a result of which all manner of people had started to describe him as the best thing to have happened to Anambra since her creation as a state. I wondered how those people could have found out how good he was when many barely knew him at the time.

Those people, I noted, had also already started paying courtesy visits and the like to Obiano. I reminded him what happened to a certain Gov Chinwoke Mbadinuju, long before he, Obiano, surfaced. I told him that Mbadinuju was a very good man who however had one tragic flaw: his love for praise.

It was this flaw that ”washed” his head, as we say, and he lost it. His government was soon hijacked by some local cow boys who contrived to make his administration one hell of a nightmare to the extent that unto this day, the name, Mbadinuju is not one to be proudly mentioned.

But seeing how Obiano was moving in the direction of Mbadinuju, I was constrained to sound the warning. But that seemed to fall on thin ice as Obiano was soon swept off his feet by praise mongers who ultimately landed him in trouble with the Economic and Financial Crimes Commission, EFCC, a development that nearly dragged his reputation in the mud, while those who put him in that quagmire went scot free; just as in the Mbadinuju case.

Anyone who knew Obiano must have found out how good a man he was. While he lasted in government, he was a man with a large heart and who was much loved by his fleecers who saw in him a goose laying the golden eggs. Because they washed his head with praise, he seemed oblivious of the many shady things happening right under his nose. 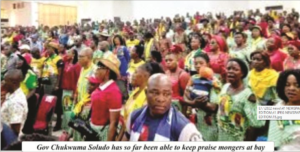 To live up to the tag of a good and generous man, he began to appoint many people as aides of different shades. He actually ended up as the first governor of the state to have appointed the most aides, with many of them having no office but feeding fat on the resources of the state.

Any wonder that many of them are contesting for various positions in the coming elections? When it is known how capital intensive elections are in Anambra, one will begin to have an idea how they took part in the open bazaar that was the Obiano  Administration.

But today, Obiano has become part of the state’s history and another man, Prof Chukwuma Soludo, is at the helm. To me, it has been a case of so far, so good. But one thing that has stood out so far has been the clear indication that he will not tolerate idlers around him.

He has shown much firmness and focus that one can only believe that the kind of loose administration we witnessed in the immediate past will not be repeated. That means that also, Soludo will not allow himself or his government to be distracted, especially in these early days.

It has been tough for Soludo as he’s virtually starting afresh on some aspects, especially that of road infrastructure, but that’s a topic to be addressed separately here. He has also been hampered by the serious security challenges we’ve all been experiencing; even though he seems to have weathered the early storm commendably.

I implore Soludo to continue on the path he has chosen. He should only work with those who can add value to his administration, even when they are not party people. Often, many leaders in Nigeria suffer from pressures from their parties to ”act like party men”.

This has been one of the ways of celebrating mediocrity in Nigeria. This is also why Soludo should hasten to conduct Local Government elections once he settles down so that such political pressures on him will lessen. However, conducting such elections is not easy and so Soludo should take his time first until enough funds to organize such are available.

I am aware that some party people have begun murmuring that they no longer understand Soludo’s drift. These are people who expect him to open the coffers in the name of being a politician as well as a governor. To such people, it does not matter if the state’s resources are siphoned as was the case in the last administration. But doing that will eventually leave the state with little as Soludo himself found out when he assumed office.

This is why Soludo should remain focused and work with those who can help him to achieve his lofty dreams and vision. The time to sing hosanna and alleluia is not now. This is the time to get down to the basics without the added encumbrance of praise mongers. Everyone should stay in their homes and allow the person they elected to chart his own course.

Anambra: Driving with Tears and Anger

Personally, I love driving but on good roads. The situation of roads in the state called Anambra today is abysmal. From the state with the best network of roads in the country, Anambra has degenerated to one with the worst roads. The road infrastructure in Anambra has since collapsed and even worsening by the day. From the capital city to the hinterlands, the story is the same.

The state of the roads around my office which is in the Okpuno/Nodu Area has made me to dread coming to work. There is no escaping the bad roads; whether I come in from the House of Assembly area, the Central Bank Area, the Millennium Industry Area or from the Y-Junction Area. And the potholes are such that no one can avoid.

What one does is to choose the ones that can be managed and any mistake means that one’s vehicle could land with a thud on a big object that was once part of that road.

The scenario around my office is not an isolated case. It is the same everywhere. But it is surely embarrassing that Awka, a capital city, is like a war-torn area. It has turned Awka into one of the ugliest looking capital cities in the country.

How did we come to this situation? It is simple. The last regime paid no attention to roads. It was a case of misplacement of priorities and embarking on projects that; while worthwhile, were not what would cause terrible problems if not attended to immediately.

I was misunderstood in some quarters but today, while we have a beautiful airport, even those who use it are groaning over the poor state of the roads which they use more than the airport. See my point now?

My worry over the prioritization of the airport project by the last regime was because it had mopped up all the monies that would have been expended on other sectors. It was such that at a stage the government was virtually finding it difficult to raise money for salaries; not to talk about payment of gratuities. But the chief victim of the concentration on the airport project was the road sector.

Because the last regime virtually shunned roads, the road infrastructure has today collapsed and rather than embark on repairs the current administration will embark on full scale reconstruction of roads all over the state. But where is the money? It has now dawned on all that the airport project, though a great idea, should not have taken priority. But my happiness is that all those who saw any dissenting voice on the project back then are suffering with the rest of us who called for caution.

I don’t want to talk about the Conference Centre which I consider a colossal waste of scarce resources. My argument then and even now is that if we had the Dora Akunyili Women’s Development Centre, why waste money on another project that performed a similar function? Why not use one tenth of the new project to refurbish the existing one?

Today, I don’t really know if the Conference Centre has been finished or not; but even when it is finished, how many conferences will be held there in a year? Before long we may start hearing about the facilities getting dilapidated or people stealing some of them. So, if I may suggest, the government should turn it into a shopping Mall. This will immediately generate funds for the state in a big way for more projects. It is the practical thing to do for the financial health of the state.

For now, let us continue to drive painfully and tearfully on the roads across the state as we await the day Soludo will provide the solution which I know will surely come.