What Have We Done? Bishop Ezeokafor Bemoans Killing of Priests

The Catholic Bishop of Awka Diocese, His Lordship Most Reverend Paulinus Ezeokafor, has expressed dismay over the incessant abduction and killing of Catholic priests across the country, emphasizing that by killing a priest, they had killed Christ the second time, reports Mmaduabuchi Onwumelu.

The visibly sad Bishop Ezeokafor, who stated this at St Patrick’s Catholic Cathedral, Awka, while speaking on the state of the nation, said it was clear that unscrupulous elements were behind the act, noting that war had been tacitly declared against the Mother Church in Nigeria, with Catholic priests, religious and laity, as their major targets. 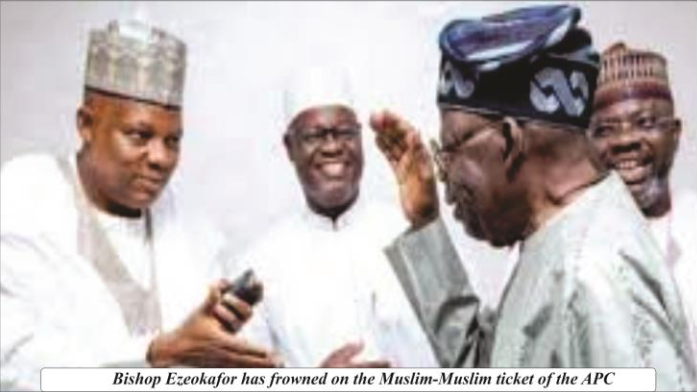 The outspoken prelate expressed displeasure with the nonchalant attitude of the Federal Government of Nigeria over the plights of Catholic priests, religious and laity, noting that it was no longer news that some people, somewhere were scheming and carrying out evil against the Universal Church.

The charismatic and influential cleric stated that with the continued abduction and killing of Catholic priests, one would conclude that there was a grand plan to silence Christ’s followers in the country, saying that they would not be cowed or intimidated.

‘Catholic priests are Christ’s representatives on earth. Killing them amounts to killing Christ a second time. Catholic priests should be respected. They made the greatest sacrifice here: no wife, no children, no heir, nobody to succeed them when they are gone. What other sacrifice is greater or costlier than that?

‘You are abducting and killing them because they are doing Christ’s work on earth. What wrong have they done? It is really abominable to maim a priest. Why go after a hapless servant of God? Someone who has left everything for the sake of God’s people. Priests deserve to be protected, encouraged and motivated.

‘Their cries will reach the heavens and the heavens will fight their battles. Nigeria Government should be very careful. Their usual silence over these killings and abduction of Catholic priests simply shows that they are enjoying it. They should remember that God’s anger will definitely descend on Nigeria’s government if it continues to play the ostrich.

‘I am seriously troubled. I am pained. I cannot keep quiet. I will continue to talk. Catholic priests should be appreciated for leading in everything good. They sacrificed their all.  They are not after ministerial appointments or contracts. Why go after them?’ Bishop Ezeokafor queried.

The chief shepherd of the Catholic Diocese of Awka, while reacting on the abduction and killing of Catholic priests across the country, condemned in strong terms the Muslim-Muslim ticket of the ruling party, the All Progressives Congress, saying that it was unacceptable in a secular state like Nigeria, describing it as height of insensitivity and wickedness. 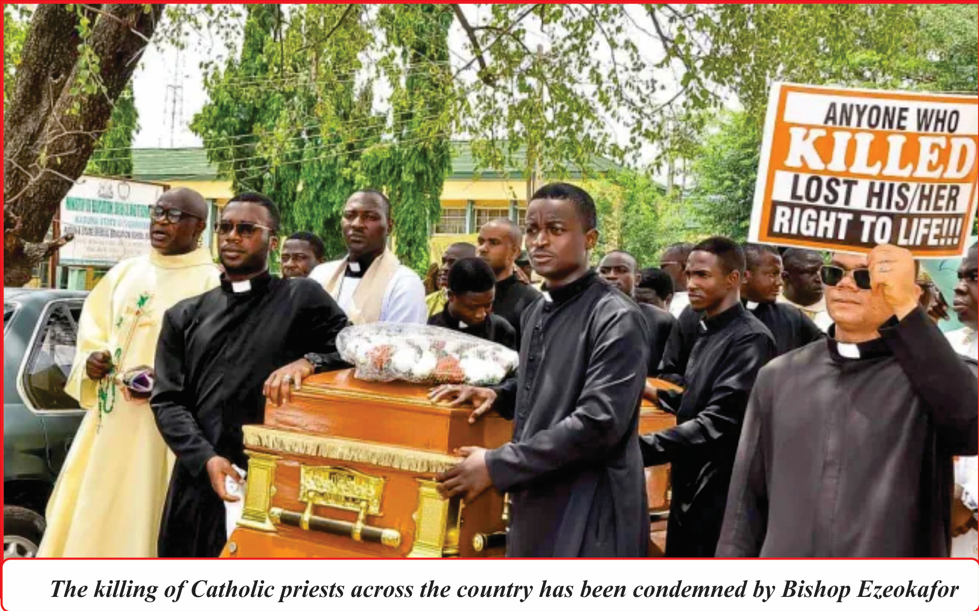 ‘You cannot come to a state like Nigeria with many different religions and be talking about Muslim-Muslim ticket. Are they saying that there is no competent Christian in the north? I’m sure there are many of them, even the Secretary of the Government of the Federation (SGF), Boss Mustapha, is a Christian. They choose to ignore him and many others Christians in the North.

‘There must be balance in everything. These are some of the things that are causing so much agitation here and there. Nigerians should rise and condemn it. Nigeria is not a Moslem country. We have two major religions; Christianity and Islam. There are others too. Why settle for one religion if you do not have a hidden agenda?,’ he asked.

Bishop Ezeokafor said that Governor Soludo’s intervention at the collapsed portion of Amansea and Amawbia axis of the Enugu – Onitsha Expressway had brought a lot of relief to commuters and transporters.

‘We are happy that with even the challenges, this administration has continued to show some prospects. They said there will be massive road construction after the raining season. I suggest they get those weather forecasters to assist them. There are times in August when there will be a break. They can do something by then.

‘Commmuters plying the Amawbia axis of the Enugu-Onitsha Express Road have started heaving a sigh of relief now that the Anambra State Government, under Professor Chukwuma Soludo is reconstructing failed portions of the road. It is a welcome development,’ the bishop said.