The Bishop of the Catholic Diocese of Ekwulobia (CADEK), Most Rev Peter Ebere Okpaleke, says the Church and the members would sustain what he termed the worthwhile legacies which the two papal chamberlains of the diocese, the late Very Rev Msgr Prof John Bosco Uchechukwu Akam and the late Very Rev Msgr Martin Chukwubunna Ezeokoli, left behind.

Bishop Okpaleke, who announced the resolution in his homily of the burial Mass for the two late monsignors at St Joseph’s Cathedral, Ekwulobia, Aguata LGA, Anambra State, last Monday, February 15, called on people of goodwill and the wealthy to join hands with the diocese for a stable proper formation of the young ones.

He described the late Msgr John Bosco Akam who had provided educational scholarship and homes for many needy persons, and the late Msgr Ezeokoli, who spent his life in rare generosity for others, as two trees which were shared by many people. The bishop called for collaborative efforts from all, lest the many people that benefited from the goodwill of the two priests, who he identified as birds that sheltered on the trees, would scatter away. 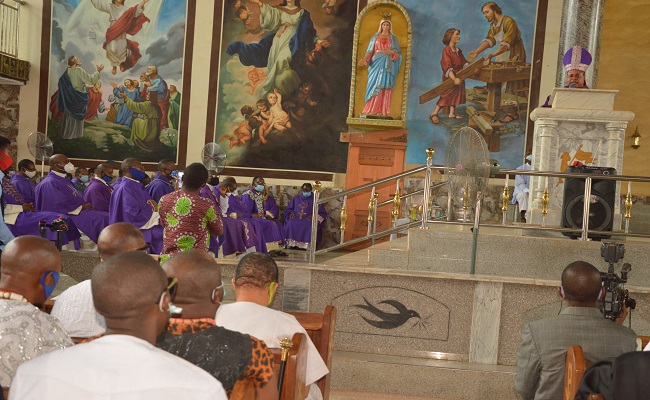 The Bishop of the CADEK, Most Rev Peter Ebere Okpaleke, giving his homily at the burial Mass for the late Msgr Prof John Bosco Akan and the late Msgr Martin Ezeokoli, St Joseph’s Cathedral, Ekwulobia, Feb 15, 2021. Inset pictures of the late monsignors.

The Catholic prelate called for people to continue the scholarship programme and care for people living with disabilities, which, he said, Msgr Akam left behind.

Pointing out that one major contribution of the late Msgr Prof Akam to human formation was the establishment of Tansian University, Umunya; Our Lady of Waldenstein Educational Centre, Uga and Konigin Des Friedens College, Uga, the Catholic prelate charged the beneficiaries of the priest’s largesse to live in gratitude to God, to the late Msgr Akam, to the Church and their fellow human beings, as well as shine as light for others.

The bishop, who highlighted the various contributions of the late Msgr Martin Ezeokoli to human development at the Federal Polytechnic, Oko, said he was not just a spiritual formator, but also an academic formator to the students.

‘The late Msgr Martin Ezeokoli in his humour, was passionate about youth formation. I am confident that his indelible marks as a former Chief Chaplain, St Augustine’ Catholic Chaplaincy, Federal Polytechnic Oko, and a lecturer at the institution, will not be erased in the minds of the students that passed through him,’ Bishop Okpaleke said.

Basing his reflections further on the First Reading of the burial Mass (Sirach 14:3-19), Bishop Okpaleke identified responsible use of talents, wealth and opportunities which people had, as the lessons from the life and death of the two late monsignors.

He charged all to make good use of their individual talents, wealth and opportunities in service to God and humanity while they were alive each day, before they would be taken away by death which awaited everyone.

He prayed that their good works would accompany them to heaven.

Most Rev Okpaleke urged all to key into the legacies of the late Msgr Akam and the late Msgr Ezeokoli, who, he said, were generous with God, especially in the formation of the youths and care for the physically challenged.

The bishop, who decried what he described as unwelcome involvement of youths in cultism, thuggery, armed robbery and other vices, called on all to contribute to the proper formation of the youths, which according to him, was their primary responsibility. According to him, the youths perished because of lack of knowledge, and there was need to get them properly formed so as to enable them swim against negative current.

He prayed for the happy repose of the souls of the duo, whose connection to God which was evident in their contributions to human formation, endeared him to many.