Ahead of the Anambra governorship election scheduled for November 6 this year, women from various local government areas in Anambra State have warned the All Progressives Congress, APC in Anambra State to jettison any plans of rigging the election. The women who stormed the popular Alex Ekweme Square, Thursday, said the APC had no foothold in Anambra State and stood no chance of winning in a free and fair contest.

The women with placards bearing various inscriptions such as ”Anambra is Cool”, ”APC has no place in Anambra State”, ”APC carry your party activities peacefully”, ”Anambra election cannot be rigged”, and ”Anambra Women are saying No to Rigging”, among others, warning APC not to trade their rigging expertise in Anambra election as the women were prepared to monitor and guide their votes on election day. 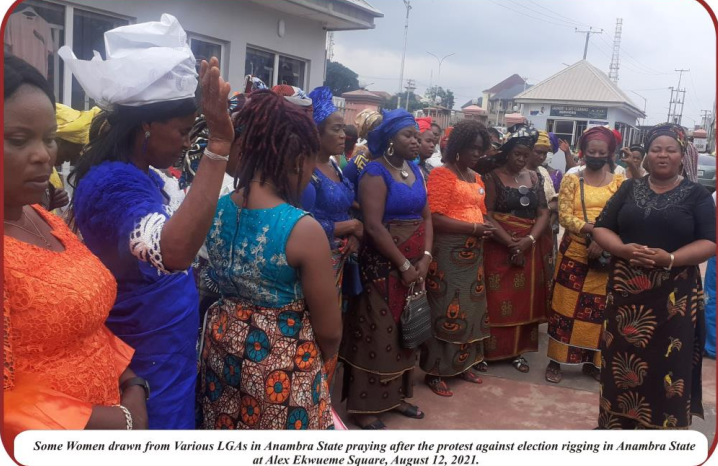 Chioma Ndife who covered the protest reports that it was triggered by various media reports about  purported plans by the APC to rig the election, as well as their antics in other states’ governorship elections.

Speaking to Fides, the coordinator, Mrs Amarachi Obioma Joseph, disclosed that women from the 21 LGAs in the state staged the protest in order to discourage and warn those mapping out plans to rig the guber election come November 6, to desist from such act.

She described Anambra as a peaceful state and one which other states had been looking up to on the conduct of proper elections.

‘In this upcoming election, we don’t want rigging, we want a peaceful election and that’s why we are here. We do not want APC to hijack the process and impose their own person on us,’ she said.

Mrs Joseph beckoned on President Muhammadu Buhari to caution the party leadership against rigging the state election and imposing their candidate on the people, saying that such would undermine the nation’s little gains in her democratic experiment and cause confusion in the state.

The women’s leader said that Anambra APC was always in the habit of rigging elections and imposing candidates against the choice of the masses, saying that Anambra women were against such and would monitor their votes against all odds.

She revealed that the women were drawn from various political parties and did not speak for any particular candidate but were concerned about the future of the Anambra children and the wellbeing of the poorest in the state.

Contributing, the Coordinator of Idemili North women, Hon. Mrs. Ethel Atuokwu, said that the protest which she termed peaceful was to ensure that the state enjoyed free and fair election in the upcoming governorship election scheduled for November 6.

‘We don’t want any rigging. Anambra has been peaceful and we want it to continue that way. We don’t want a situation where someone will just come up and tell us that he or she is now the governor without our consent. We don’t want such situation and that is why we are protesting to prevent such from happening.

‘We are in a democratic dispensation, thus we should be allowed to vote and our votes should count,’ she emphasized.

She said they embarked on the protest following some news stories that APC was planning on imposing their candidate on the state like what played out during the APC primary. She said it was unfortunate that APC did not listen to the voice of the people, pointing out that a good ruler should also pay attention to the people.

She stated that a free and fair election would assist in maintaining the peace in the state.