The entire members of Progressive Academic Staff Union of Universities (ASUU), Chukwuemeka Odumegwu Ojukwu University, COOU, have opposed the industrial action about to be embarked upon by the Academic Staff Union of Universities, ASUU National, stating it is not good to welcome the incoming University’s visitor, Prof Chukwua Soludo, Governor-Elect of Anambra State, with an Industrial action which, according to them, has not yielded any result

Addressing newsmen at the COOU, Igbariam Campus, the Interim Chairman of Progressive Academic Staff Union, COOU, Professor Osita Chiaghanam, disclosed this while stating the need to safeguard the institution against those he described as agents of destabilization and destruction masquerading as unionists. 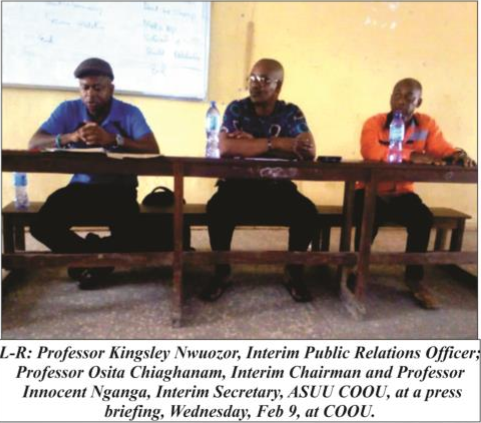 ‘The university community, especially the academic staff in Chukwuemeka Odumegwu Ojukwu University (COOU), is hereby placed on red alert to beware of a sinister and wicked plot by enemies of peace and merchants of doom to invade the university and ply their trade of blackmail, distortion, disruption and destruction.

‘The latest plot being bandied by the hatchet men of a ruinous dark past as ASUU-COOU Reconciliatory Congress is nothing but a well-rehearsed gang-up to recruit sympathisers to feather their self-warming nest of infamy. Sensing that their mission is dead-on-arrival as usual, the meddlesome interlopers have resorted to mudslinging, cheap blackmail and arm twisting just to make an in-road into the conscience of a few unsuspecting members of the university community.

‘Make no pretence about it, the only goal of these sly invasionists and their cohorts is to truncate the industrial harmony in our university and erode all gains of the university’s stable academic calendar,’ he said.

Prof Chiaghanam recalled that certain individuals invaded the university in September 2020 and failed woefully despite their ‘truckload of frenzied falsehood against the University Management.’ He noted that now they were back again.

‘The marauders must be told in clear terms that COOU is a community of people of honour committed to the best ideals of responsible unionism.

‘It is an old fashioned single story for the self-serving czars of stomach infrastructure to signpost nonpayment of Earned Academic Allowances (EAA) and Pensions at a time the university is reaping the gains of having a visionary Management that courageously manned up to the ruins of the university’s past and changed the narratives for good.

‘Yes, a ruinous past that was characterised by low staff morale, aridity, disenchantment and traumatising impoverishment of staff and systems brought about by the unbridled greed of power-hungry individuals that took the old university administration hostage and made COOU their personal vassal and fiefdom where abuse of office, embezzlement, impunity and iniquity held sway.

‘It beats no imagination that these locusts and cankerworms that championed and chaperoned the ignoble past have suddenly donned the robe of unionism in their desperate bid to regain access to the university coffers and reactivate their habitual pillage and plunder of our university. God forbid,’ he stated.

In their separate speeches, the interim Secretary, Professor Innocent Nganga; the Interim Public Relations Officer, Prof Kingsley Nwuozor, and Prof Ezeogidi, described ASUU National as a responsible trade union, noting that they were not against ASUU national leadership, adding that they would not allow what they termed unscrupulous elements to use the ASUU COOU platform to perpetuate evil in the University.

Continuing, Professor Chiaghanam said they were for peace and progress of the University, and praised Professor Greg Nwakoby, the Vice Chancellor of the university, for prompt payment of salaries, completion of abandoned projects payment of arrears of check-off dues from 2015 with only four months remaining to be paid.

He urged every staff member of COOU to be vigilant against what he called the antics of merchants of discord and disunity parading as unionists on a self-assigned mission to steal, kill and destroy.