We Met as Enemies and Left as Friends

Barely one month after a priest of the Catholic Diocese of Awka suffered a near death experience in the hands of kidnappers suspected to be Fulani men at Amansea, Awka South LGA, Anambra State, another priest of the same Catholic Diocese of Awka, Rev Fr Peter Andrew Chukwuebuka Ibeazor, has faced the same ordeal in the hands of four kidnappers who were also believed to be Fulanis at Amansea – Ezinato Road.

Rev Fr Ibeazor, who encountered Fides team of Jude Atupulazi, Ifeoma Ezenyilimba, Vivian Ogbodo and Daruwana Daku, in Awka last Monday, spoke of what he described as his 28 hours retreat experience with kidnappers and how he eventually made friends with them before they released him. The priest said he was happy that he returned with his Bible and chaplet. 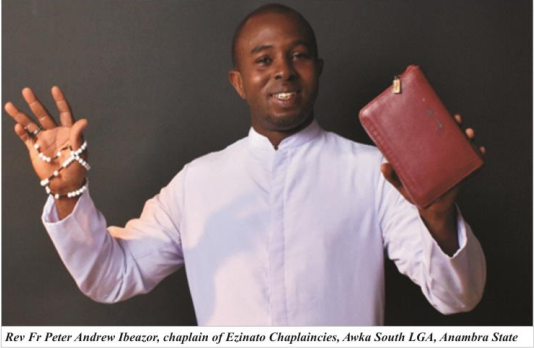 Fr Ibeazor, who is the chaplain of Ezinato Chaplaincy, Awka South LGA, Anambra State, said he had blessed the kidnappers when they kidnapped him on November 11, 2021, and when they released him the next day, prompting them to say to him, ‘God bless you’.

The Ogidi born priest who said he even invited them to his chaplaincy, recalled that he had finished with his usual sports exercise in Awka and was heading to his parish house at St James’ Chaplaincy, Ezinato, for an appointment with some of his parishioners at 5.30 pm when he ran into the kidnappers around 7 pm on November 11.

Fr Ibeazor, who explained that he was earlier held up in a traffic gridlock at Aroma, Awka, said he had called and rescheduled the 5.30 pm appointment he had.

The priest, who said he was putting on his sportswear, further said that while he was about seven poles to the parish, he heard some deafening gun shots by those who turned out to be Fulani men who were about four in number and within the ages of 18-30 years.

According to the priest, they spoke Fulani fluently with dotted Hausa and immediately he heard the gun shots, he reached out for his Holy Bible and chaplet which he described as his pride, weapons and companions.

He said the fully armed kidnappers took him into the bush, leaving his car which one of his parishioners sawand alerted other parishioners and the security outfit of the town who took to the bush in search of him, while securing his car at the parish.

The priest said the parishioners embarked on prayers the same way the Catholic Community did when the Vice Chairman of the Chaplaincy, Sir Williams Onwu, was kidnapped six months earlier and he could hear his parishioners praying. He narrated that the kidnappers who saw how he guarded his Bible, threatened him at gun point with knives, while he begged them to leave the Holy Bible for him. Having known he was a priest, he said, they left him with his Bible. 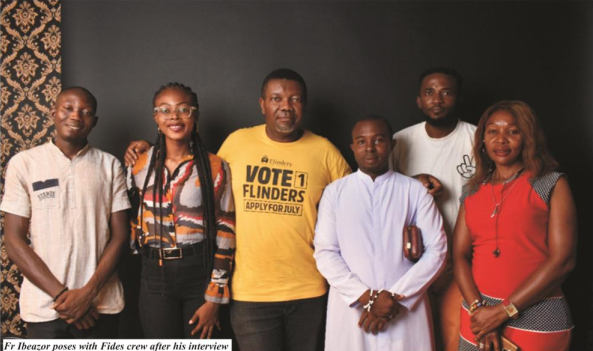 Fr Ibeazor said the kidnappers felt threatened by the search being conducted by the community and was ready to shoot at them at any slightest chance. He noted that when the search party from the town later withdrew, his abductors took him to the other side of Amansea.

He continued, ‘I was carefully guarded in between the four men as we went through the muddy roads. And at intervals I would bless them saying, “God bless you, Allah bless you”, and that would attract heavy blows on me. We trekked into the bush through the trees and swampy areas.

I would often kneel down to pray and read my Bible at every spot and each time I did this they would order me to sit down.

‘By 3.30 am the next day, the Anambra State Government searched for me with security tracking devices. We later came to a spot where we settled down and they opened up for ransom and demanded N20m for my release,’ the priest said, disclosing that he was eventually released at Amansea at around 10 pm the next night, being Friday, November 12, following interventions by some of his friends.

On how he was able to make it home safely, Fr Ibeazor explained that the kidnappers had told him to go farther inside the bush and after they left, he came back and found his way to the road through the same route they (the abductors) used.

The Awka Diocesan priest, who said he was left tattered by the kidnappers, said he collected water from road hawkers who were still around and washed off mud from his body and waited patiently for any means of transportation.

He stated that though the kidnappers collected his SIM card, he was happy that they left his Holy Bible and chaplet for him.

‘The abductors, while speaking on the phone with a friend of mine who is an honourable member, said I had something in my hand which I didn’t want to let go (the Holy Bible). ”But he is a good man. If he is not a good man we would have removed his eyes and heart, sell them, and make good money from them”, the abductors said, ‘Fr Ibeazor narrated.

‘Luckily for me, I had my ATM card on me. So after the help I got from road hawkers, I saw a keke man to whom I explained my predicament and begged him to take me to a nearby ATM outlet.

He took me to Stanel where I withdrew some money and begged him to take me to where I would get shelter. At Aroma Junction, I saw someone I knew.So, I used this phone and called the bishop and informed him of my release,’ Fr Ibeazor said.

The Catholic priest, who is also a deanery chaplain of the Catholic Charismatic Renewal of Nigeria (CCRN), thanked God for the prayers of the CCRN, Onitsha Ecclesiastical Province, who, he said, happened to be at aconvention then. He also thanked the members of Ezinato Catholic Community and those of the Number One Adoration Family for their prayers; as well as the support of many individuals, which, he said, necessitated his release.

He appreciated his bishops, brother priests, Anambra State Government through the State Commissioner for Works, Engr Marcel Ifejiofor, of the 4 Square, and his other friend, Hon Nnamdi Obiechina, for facilitating his release.

Fr Ibeazor called on the Anambra State Government to construct an access road for Ezinator to curb insecurity in the town. He said that Ezinato and Amansea towns had been prone to kidnapping and noted that constructing the Ezinato-Umunze Road would help in bringing development to the community which is made up of Ndiora, Ntoko and Ndikpa.

‘Though without road, electricity, water and money, taking my share in labouring/affliction of the Gospel (2 Tim 1:8) is my Joy,’ he concluded.