The Nigeria Union of Journalists (NUJ) Anambra State Chapter, has described Fides Media as one of the media houses the Union holds in high esteem.

The NUJ chairman of the chapter, Comrade Sir Emmanuel Ifesinachi, made this known during the inauguration of the new executive members of the Fides Chapel at Archbishop A. K. Obiefuna Auditorium, Fidesplex, Okpuno, Awka.

Comrade Ifesinachi, while delivering the inaugural speech, lauded Fides Director, Rev. Fr Dr Martin Anusi, for his magnanimity towards NUJ and also for what he described as the positive impact he makes to society at large. He said the Director deserved an award for investing in and encouraging young members of the Union. 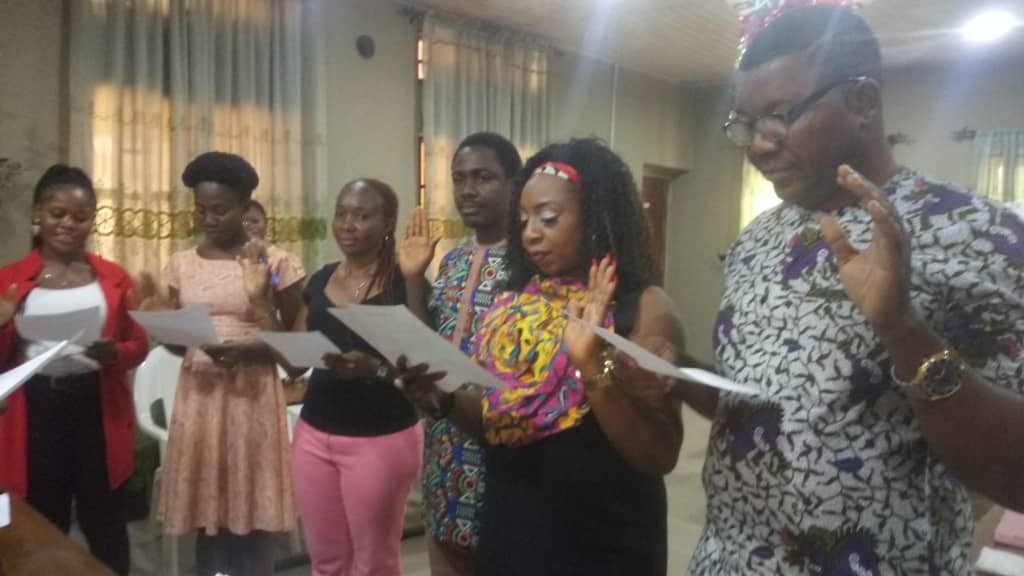 The new exco members of Fides Chapel led by Editor-in-Chief, Jude Atupulazi (1st right), taking their oath of office during their inauguration by the Nigeria Union of Journalists Anambra State Council, Monday, 21 June 2021 at Fidesplex.

Ifesinachi, who described Fides Editor-in- Chief, Mr Jude Atupulazi, who is also the new chairman of Fides Chapel, as a committed NUJ member, urged the new executive members and other members of the chapel to be more active and committed the Union.

In appreciation, Fr Anusi acknowledged NUJ for their support to Fides so far, and said he was out to teach, add values and morals, to society; even as he also reassured his commitment to NUJ.

Fr Anusi regretted that the Fides Chapel had been found wanting in some of the NUJ activities and assured the NUJ that he would address and ensure commitment from the chapel members.

He also commended the NUJ chairman and secretary for the good understanding that existed between them.

For the part of the NUJ secretary, Mr Emmanuel Udeagha, he applauded Fides for the cordiality that existed among them and noted that such was hardly seen in other organizations.

He also commended the efforts of Mr Atupuluzi and Fides Assistant Editor, Mrs Uche Amunike, for laying their wealth of knowledge bare to the young members of the Union to tap from.

Contributing, the NUJ Treasurer and also erstwhile Fides Chapel chairman, Sir Abuchi Onwumelu, urged the members of the chapel to always attend NUJ meetings and functions. He also appealed to the new executive members to pilot the affairs of the chapel with love and solidarity.

The new Chapel chairman, Mr Atupulazi, in a vote of thanks on behalf of the new executive, assured that his leadership would ensure the commitment of Fides Chapel members to NUJ.