Awa Community in Orumba North LGA of Anambra State has expressed displeasure over the ongoing plan by some individual to impose a traditional ruler on the community.

The imposition had triggered a leadership tussle and subsequent division among individuals in the community, leading to the protest held on Wednesday, 10th February, reports Chioma Ndife.

A faction of the community stormed Government House, Awka, to solicit for Gov Obiano’s intervention over the planned Imposition of traditional ruler.

They were protesting against what they described as the proposed imposition of Mr Israel Ezue as the traditional ruler of the community, without due process in line with their customs and tradition. 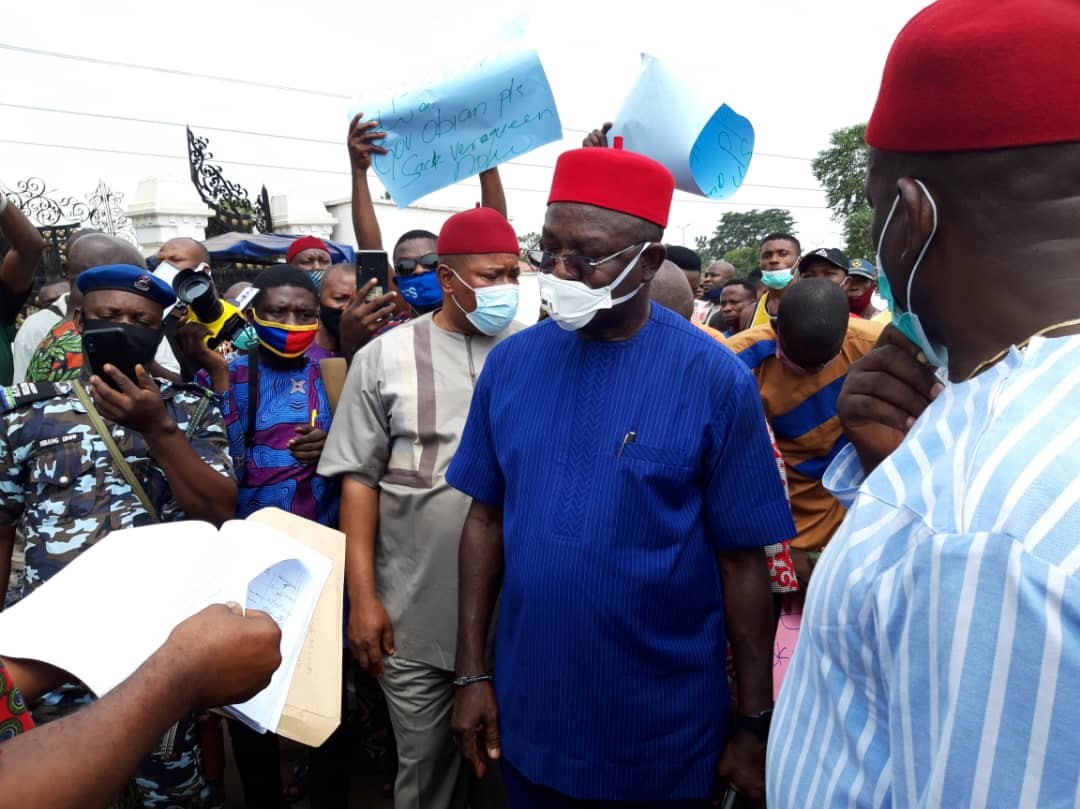 They displayed placards with inscriptions as, “Our dear Governor, Awa is on fire”, ”Hon Emeka Afforka is behind the trouble”, “We need government intervention”, “Barr Vera Queen has sold our Igweship post to Chief Israel Ezue”, among others.

Fides gathered that after the demise of their last traditional ruler in 2015, the traditional stool of Awa had remained vacant, giving rise to various litigations.

In his address, the Senior Special Assistant to Governor Obiano on Community Liaison, Chukwuemeka Egwuonwu, also alleged that some people in their community connived with some Anambra Government officials to manipulate the process of election so as to install their own traditional ruler against the wish of the people.

They stated in their letter, ‘We, the concerned citizens of Awa, with total commitment to the growth and sustainable peace in our community, wish to bring this complaint against the activities and conduct of Chief Israel Ezue;  Professor Obiajulu Obikeze; Dr Ray Ofor; and other cohorts who are attempting to hijack Awa Development Union and install Chief Israel Ezue as the traditional ruler of Awa, even when they knew that Umunzekwe and Ezeani royal family is the only family that ought to produce the traditional ruler of Awa.

‘That on the second day of January 2017, the Umunzekwe Welfare Association wrote a letter addressed to Obiajulu Obikeze, the President-General of Awa Development Union, informing the Union that the stool of the Igweship of Awa was vacant, and in consideration of the fact that by the custom and Constitution of Awa, the Umunzekwe is the Igwe producing units in Awa, and urged the Union to exercise patience with the royal family to produce a worthy son.

Chief Egwuonwu also alleged that some appointees in the government collected N50 million from a section of the community to achieve ‘their egocentric interest.’

Egwuonwu said Awa was a small and peaceful community but wondered why some influential people would want to throw the community into perpetual crisis.

He said the government should intervene and stop the election from going on because it was not a decision of the majority in view of the fact that every issue surrounding the emergence of a new traditional ruler had not been addressed.

Also speaking, Chief Paul Nwafor, a former President General of the community, said they were told to prepare for an election on February 13 based on a letter from the government which they had not seen a copy.

Nwafor said the community needed a traditional ruler but insisted it must follow due process.

He said it was the duty of the community to elect a traditional ruler and not for government to impose one on them, adding that there was an unhealthy political under tone behind what he described as the desperate effort to conduct election for Awa.

When contacted, the President General of Awa, Dr Ray Offor, said the protesters had contradicted themselves by claiming they were not aware of the election notice but had gone ahead to protest against it.

Ofor however said they were waiting for further directives, based on government’s reaction to the protest, on whether to proceed with the election or not.

Responding, a representative from the office of the Commissioner for Local Government and Town Union Affairs, who also doubles as the Public Relations Officer of the Ministry, Mr Henry Nwasike, assured that their grievances were well noted.

Nwasike, who spoke on behalf of the Commissioner, said the government of Obiano would do all that was possible to ensure that there was peace in every community.

He said government did not conduct traditional ruler elections for communities but supervised them whole, just as he assured that their grievances would be communicated to the appropriate authorities.