The Washington National Cathedral has announced on June 16 that it is making staff cuts “that are both necessary and hard to accept” as the economic damage from the COVID-19 pandemic mounts.

‘I want you to know that these are more than mere numbers on a spreadsheet; each decision involves painful change for treasured colleagues and friends, and it grieves me deeply,’ Hollerith wrote. “In my 30 years of ordained ministry, this is the hardest set of decisions I’ve ever had to make.’

Hollerith said he and other senior cathedral staffers would take a 20% pay cut, while all employees would see reduced benefits in the coming year, and all raises and new hires would be paused until further notice.

Though the National Cathedral has maintained a robust online presence, ‘three months of closure due to the pandemic have had serious negative consequences on our finances,” Hollerith wrote, stressing that the cuts were the result of “forces beyond our control” and not mismanagement or poor planning.

In fact, after years of financial struggles – mostly due to the damage caused by a 2011 earthquake – the cathedral’s finances had been on the upswing. The past four years had seen consecutive budget surpluses, and fiscal year 2019 saw major increases in membership, visitors and income. Congregational giving went up 39% from the previous year, and event and programme revenue went up 50%.

Now visitors, events and programming – which make up over 20% of the cathedral’s operating revenue – are gone for the foreseeable future. The staff cuts mostly affect the cathedral’s tourism and events management departments, Hollerith said. 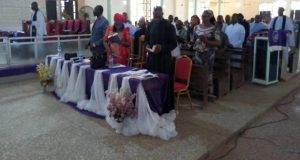