On Friday, April 2, the governor of Anambra State, Prof Chukwuma Soludo, convened a meeting of stakeholders of the state to brainstorm on the way out of the security logjam that has bedeviled the state. Part of the resolutions reached at the meeting was the holding of prayers in all the churches simultaneously last Monday by 11 am. The aim was to seek God’s intervention on the debilitating effects of insecurity in Anambra State, nay the South East Region.

But even before the prayers could be held, the hoodlums struck again, this time along the Igboukwu-Uga Road, killing two traffic officials of the Federal Road Safety Corps, FRSC. It was an attack that all but proved that the hoodlums were not only unwilling to embrace peace but were out to discredit the young government of Soludo which has been trying to restore normalcy to the state, security wise. It was also an indication that we are still a long way from achieving peace in the state and region.

Indeed, what have been going on with regard to restoring peace in the South East Region have been individual efforts by the states, rather than concerted ones. A situation where the hoodlums are chased away from one state to another from where they are again chased back to the previous state soon becomes a merry-go-round stuff that rubbishes efforts put into the exercise. 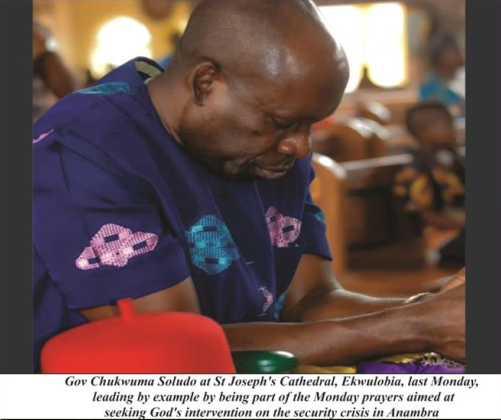 This is why we believe that the best approach will be for all the South East states, working with the security agencies and the various communities, to dedicate a week or two to simultaneously comb all the known hide outs of these undesirable elements in order to either wipe them out or ensure that they are driven out of the South East Region for good and permanently kept out.

It has got to a stage where drastic solutions have become the only option against a common enemy that is obviously not ready for dialogue. We say this because these groups have morphed into different command structures that no longer listen to the main group. And this is why no one should start anything they are not sure of its outcome.

We believe that some of these hoodlums are those freed from the various correctional centres or prisons in the initial stage of this violent agitation. While it was relatively easy to arm them and indoctrinate then to join in the agitation, it has now become difficult to dissuade them from the path of destruction they have chosen to tread.

Since they are bent on wreaking havoc continually on their own land, it has become imperative that this monster is crushed decisively once and for all and that can only be done through a joint effort of all the South East governments, security agencies and communities.