When government fails to provide security for the people, the people are left with no choice than to devise any means to protect themselves. That is the scenario playing out presently in parts of Anambra where instant justice is meted out to criminals. It started from Nkpor, then moved to Obosi, Oba and then Onitsha. Those caught stealing are squeezed into tyres and burnt alive.

As the people of the state were grappling with this turn of events, news emerged that the dreaded Bakassi Boys had made a return to Awka, the capital city of Anambra State. According to information reaching us, the group landed in the capital city last Sunday, June 13, and the next day, Monday, four suspected criminals were reportedly killed. 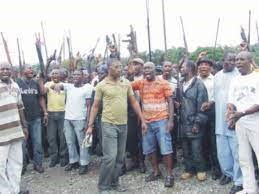 Private security outfit: opinions are divided on their necessity

Bakassi Boys are an unconventional security outfit charged with meting out instant justice to criminal elements. They first came into prominence years ago during the regime of Gov Chinwoke Mbadinuju. Their emergence then quickly rid the state of criminal elements to such an extent that the state started recording zero crime.

But as in most human undertakings, the outfit soon became politicized and started dabbling into sundry matters outside their brief until they were forcibly disbanded by the Federal Government.

Their return in Awka and the instant justice being meted out to criminals elsewhere, have divided opinions. While some frown at what they see as a recourse to jungle justice, which they fear, could affect innocent citizens; others believe it is the solution to the rising crime across the state, being that the conventional security agencies have vacated the public space.

Indeed, since the emergence of the unknown gunmen which has led to the killing of many security personnel, burning of police stations, correctional centres and offices of the Independent National Electoral Commission, INEC, criminals have seized the opportunity of the absence of security personnel on the roads to unleash terror on law abiding citizens in across the state. On top of that, cult activities had reached a crescendo, with cult members being killed every week throughout the Awka capital city. The latest as at press time was the killing of a Keke Union leader at Unizik Temporary Site, Awka.

The chaotic security situation was such that people were being robbed in front of shops where they bought things, with no finger being raised. It was also becoming dangerous to board tricycles or keke, as well as shuttle buses. These vehicles had become notorious for being used by criminals to rob hapless passengers of their monies, phones and other possessions. Things were that bad.

It was inevitable that going by the deteriorating security situation, and with government unable to rise to the occasion, that something was bound to happen. That thing is what we are seeing today: individuals coming together to make their own security arrangements outside the ones recognized by the law. The return of the Bakassi Boys and the jungle justice being meted out to suspected criminals may just be the beginning of more measures that will come unless the government wades in and takes over the public space via the conventional security outfits.

No matter how effective such private arrangements can be, they are still susceptible to human errors and abuse and this is why the one organized by the government will still be preferable.

It is no idle talk to say that Anambra, a state which until recently prided itself as the safest state in the country, has been overrun by criminals and criminality. The narrative needs to change and quickly too, lest we descend to a Hobbesian State.