… Says Women have Capacity to be Leaders

As the 2021 Anambra State Governorship Election draws near, the Catholic Bishop of Awka Diocese, Most Rev Paulinus Ezeokafor, has charged the electorate to ensure they vote in good, visionary leaders who will be committed to the common good of the masses.

Bishop Ezeokafor, who gave the charge when he flagged off the 2021 Annual Laity Week of the Catholic Laity Council of Nigeria, Awka Diocese (CLCNAD), at St Mary’s Catholic Church, Awka, last Sunday, March 14, advocated the need for individuals who were people of truth and justice, and had the maturity to take up responsibilities, to be voted into various public offices.

He insisted that the most important thing needed from every leader was to create opportunities for good life and wellbeing for all.

The Catholic prelate condemned the actions of those who engaged in money politics. According to him, politicians who gave the electorate money for votes tended to wrongly buy their conscience. 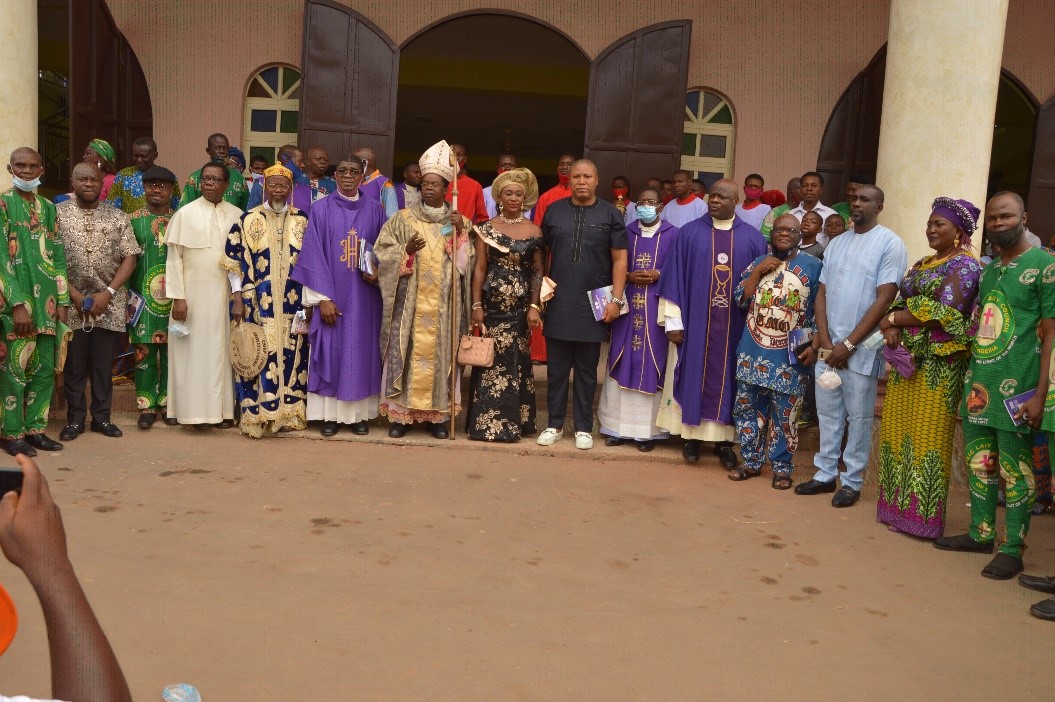 Bishop Paulinus Ezeokafor (7th from left) with some of the dignitaries and laity officers at the event. 2nd from left is an ambassador of CLCNAD, High Chief JohnBosco Onunkwo, while 2nd from right is Hon Ify Obnabo who represented Dr Mrs Ebelechukwu Obiano. 7th from right is the chairman of the occasion and Chief Whip, Anambra State House of Assembly, Hon Lawrence Ezeudu, St Mary’s Parish, Awka, March 14, 2021.

Pointing out that leadership moulded an individual, Bishop Ezeokafor charged the laity to take up elective leadership positions in their communities, the state and the country, and as salt of the earth and the light of the world, stand out as good leaders.

He noted that participatory politics was the duty of the laity, while the clergy had the duty to give the necessary guidance and advice.

Meanwhile, the bishop, at the event, exhorted women against constituting problems to themselves in the process of electioneering and politicking. Bishop Ezeokafor, who said he did not see why the women who had the numerical strength could not be elected governors and president in Nigeria, observed that women were the architects of their own problems.

He cited the likes of the late Prof Dora Akunyili, Dr Oby Ezekwesili and Ngozi Okonjo-Iweala, as some of the notable women who had distinguished themselves as exemplary leaders.

Adding her voice, the wife of the Governor of Anambra State, Dr Mrs Ebelechukwu Obiano, charged the electorate to make proper use of their voters’ card on the election day.

Mrs Obiano, who was represented by the Special Adviser to Governor Obiano on Media, Hon Ify Obinabo, flayed those who did not participate in elections and said they encouraged bad governance which would also affect them and their families.

According to her, it was only when the masses performed their franchise of voting in good candidates that good decisions would be taken for the good of all. The wife of the governor advised the masses against collecting money for votes, saying that such peanuts were not enough for their security, jobs and education.

Also speaking at the event, one of the Anambra State governorship aspirants on the platform of APC, High Chief JohnBosco Onunkwo, observed that the problem in society was because people had lost values and focus. He described the Laity Week Flag Off as a platform to proffer solutions and set things right, and urged the laity to make the best out of the trainings and the opportunities they were given.

High Chief Onunkwo, who is one of the ambassadors of CLCNAD, identified the need for the laity to engage actively in political parties and for good servant-leaders who had a pact with God to be voted into political offices, irrespective of their political parties.

According to him, it was when good leaders were voted into offices that there would be discipline in governance and human dignity, as well as optimum development in agriculture, industrialization and good infrastructure for the benefit of the masses.