Here is the full text of the Vatican Congregation for the Doctrine of the Faith’s response to a question on the blessing of same-sex unions, followed by an accompanying commentary, issued March 15, 2021:

TO THE QUESTION PROPOSED:

Does the Church have the power to give the blessing to unions of persons of the same sex? 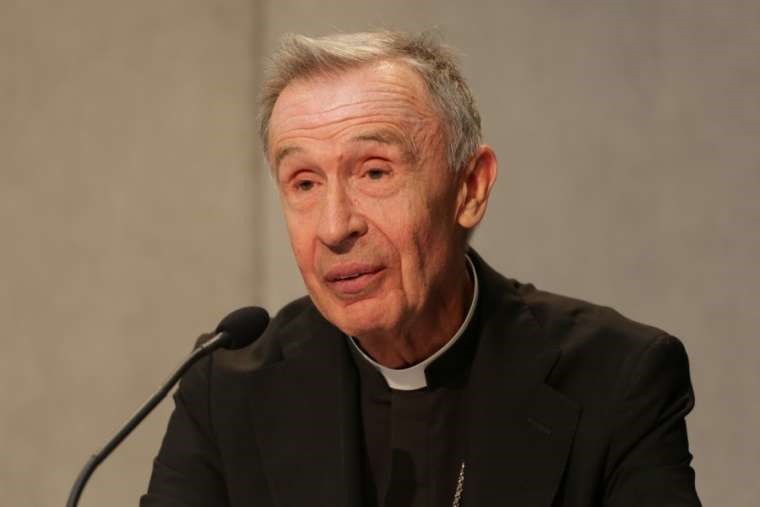 The then Archbishop Luis Ladaria at the Vatican Press Office Sept. 8, 2015. / Daniel Ibáñez/CNA.

In some ecclesial contexts, plans and proposals for blessings of unions of persons of the same sex are being advanced. Such projects are not infrequently motivated by a sincere desire to welcome and accompany homosexual persons, to whom are proposed paths of growth in faith, “so that those who manifest a homosexual orientation can receive the assistance they need to understand and fully carry out God’s will in their lives”[1].

On such paths, listening to the word of God, prayer, participation in ecclesial liturgical actions and the exercise of charity can play an important role in sustaining the commitment to read one’s own history and to adhere with freedom and responsibility to one’s baptismal call, because “God loves every person and the Church does the same”[2], rejecting all unjust discrimination.

Among the liturgical actions of the Church, the sacramentals have a singular importance: “These are sacred signs that resemble the sacraments: they signify effects, particularly of a spiritual kind, which are obtained through the Church’s intercession. By them men are disposed to receive the chief effect of the sacraments, and various occasions of life are sanctified”[3].

The Catechism of the Catholic Church specifies, then, that “sacramentals do not confer the grace of the Holy Spirit in the way that the sacraments do, but by the Church’s prayer, they prepare us to receive grace and dispose us to cooperate with it” (#1670).

Blessings belong to the category of the sacramentals, whereby the Church “calls us to praise God, encourages us to implore his protection, and exhorts us to seek his mercy by our holiness of life”[4]. In addition, they “have been established as a kind of imitation of the sacraments, blessings are signs above all of spiritual effects that are achieved through the Church’s intercession”[5].

Consequently, in order to conform with the nature of sacramentals, when a blessing is invoked on particular human relationships, in addition to the right intention of those who participate, it is necessary that what is blessed be objectively and positively ordered to receive and express grace, according to the designs of God inscribed in creation, and fully revealed by Christ the Lord. Therefore, only those realities which are in themselves ordered to serve those ends are congruent with the essence of the blessing imparted by the Church.

For this reason, it is not licit to impart a blessing on relationships, or partnerships, even stable, that involve sexual activity outside of marriage (i.e., outside the indissoluble union of a man and a woman open in itself to the transmission of life), as is the case of the unions between persons of the same sex[6].

Furthermore, since blessings on persons are in relationship with the sacraments, the blessing of homosexual unions cannot be considered licit. This is because they would constitute a certain imitation or analogue of the nuptial blessing[7] invoked on the man and woman united in the sacrament of Matrimony, while in fact “there are absolutely no grounds for considering homosexual unions to be in any way similar or even remotely analogous to God’s plan for marriage and family”[8].

The declaration of the unlawfulness of blessings of unions between persons of the same sex is not therefore, and is not intended to be, a form of unjust discrimination, but rather a reminder of the truth of the liturgical rite and of the very nature of the sacramentals, as the Church understands them.

The Christian community and its Pastors are called to welcome with respect and sensitivity persons with homosexual inclinations, and will know how to find the most appropriate ways, consistent with Church teaching, to proclaim to them the Gospel in its fullness. At the same time, they should recognize the genuine nearness of the Church – which prays for them, accompanies them and shares their journey of Christian faith[9] – and receive the teachings with sincere openness.

The answer to the proposed dubium does not preclude the blessings given to individual persons with homosexual inclinations[10], who manifest the will to live in fidelity to the revealed plans of God as proposed by Church teaching. Rather, it declares illicit any form of blessing that tends to acknowledge their unions as such.

In this case, in fact, the blessing would manifest not the intention to entrust such individual persons to the protection and help of God, in the sense mentioned above, but to approve and encourage a choice and a way of life that cannot be recognized as objectively ordered to the revealed plans of God[11].

At the same time, the Church recalls that God Himself never ceases to bless each of His pilgrim children in this world, because for Him “we are more important to God than all of the sins that we can commit”[12].

But he does not and cannot bless sin: he blesses sinful man, so that he may recognize that he is part of his plan of love and allow himself to be changed by him. He in fact “takes us as we are, but never leaves us as we are”[13].

For the above mentioned reasons, the Church does not have, and cannot have, the power to bless unions of persons of the same sex in the sense intended above.

The Sovereign Pontiff Francis, at the Audience granted to the undersigned Secretary of this Congregation, was informed and gave his assent to the publication of the above-mentioned Responsum ad dubium, with the annexed Explanatory Note.

Rome, from the Offices of the Congregation for the Doctrine of the Faith, the 22nd of February 2021, Feast of the Chair of Saint Peter, Apostle.

Article of Commentary on the Responsum ad dubium

The new statement of the Congregation for the Doctrine of the Faith is a response to a question — in classical terms, to a dubium — occasioned, as is normally the case, by pastors and faithful who require clarification and guidance concerning a controversial issue. When questions are triggered by problematic assertions or practices in important areas of Christian life, an affirmative or negative response is provided, along with a statement of the reasoning that supports the response presented. The purpose of such interventions is to help the universal Church to respond better to the demands of the Gospel, to settle disputes, and to foster healthy communion among the holy people of God.

In the present case, a disputed question has arisen in the framework of the “sincere desire to welcome and accompany homosexual persons, to whom are proposed paths of growth in faith” (Explanatory Note), as indicated by the Holy Father Pope Francis at the conclusion of two Synodal Assemblies on the family: “so that those who manifest a homosexual orientation can receive the assistance they need to understand and fully carry out God’s will in their lives” (Apostolic Exhortation Amoris laetitia, n. 250). These words are an invitation to evaluate, with appropriate discernment, projects and pastoral proposals directed to this end. Among these are blessings given to the unions of persons of the same sex. It is therefore asked whether the Church has the power to impart her blessing: this is the formula contained in the quaesitum.

The answer — the Responsum ad dubium — is explained and motivated in the attached Explanatory Note of the Congregation for the Doctrine of the Faith, dated February 22, 2021, to the publication of which Pope Francis himself has given his assent.

The Note is centered on the fundamental and decisive distinction between persons and the union. This is so that the negative judgment on the blessing of unions of persons of the same sex does not imply a judgment on persons.

Persons first and foremost. In their regard, what is stated in n. 4 of the Considerations Regarding Proposals to Give Legal Recognition to Unions Between Homosexual Persons written by the same Congregation, and recalled by the Catechism of the Catholic Church, must never be forgotten: “According to the teaching of the Church, men and women with homosexual tendencies ‘must be accepted with respect, compassion, and sensitivity. Every sign of unjust discrimination in their regard should be avoided’ (2358)”. This teaching is recalled and reaffirmed by the Note.

As for unions of persons of the same sex, the response to the dubium “declares illicit any form of blessing that tends to acknowledge their unions as such”. The Explanatory Note bases the illicitness on three interconnected reasons.

The first reason arises from the truth and value of blessings. They belong to the genre of sacramentals, which are “liturgical actions of the Church” that require consonance of life with what they signify and generate. There are meanings and outcomes of grace that the Note explains in concise form. Consequently, a blessing on a human relationship requires that it be ordered to both receive and express the good that is pronounced and given by the blessing.

Thus we come to the second reason: the order that makes one fit to receive the gift is given by the “designs of God inscribed in creation, and fully revealed by Christ the Lord”. These are designs to which “relationships, or partnerships, even stable, that involve sexual activity outside of marriage” do not correspond, for they are “outside the indissoluble union of a man and a woman open in itself to the transmission of life.” However, not only these unions — as if the problem were only such unions — but any union that involves sexual activity outside of marriage, which is illicit from the moral point of view, according to the perennial teaching of the ecclesial Magisterium.

This all implies a power that the Church does not possess, because she does not have the power over God’s designs, which would otherwise be rejected and denied. The Church is not the arbiter of these designs and the truths they express, but their faithful interpreter and witness.

The third reason is to avert an error into which one would easily be led: that of assimilating the blessing of unions of persons of the same sex to that of matrimonial unions. Because of the connection between blessings of persons and the sacraments, the blessing of such unions could in a sense imply “a certain imitation or analogue of the nuptial blessing”, imparted to a man and a woman united in the sacrament of Matrimony. This would be erroneous and misleading.

For the above reasons “the blessing of homosexual unions cannot be considered licit”. This statement in no way detracts from the human and Christian consideration in which the Church holds each person. So much so that the response to the dubium “does not preclude the blessings given to individual persons with homosexual inclinations who manifest the will to live in fidelity to the revealed plans of God as proposed by Church teaching.”