Uyo Bishop Charges Nigerians on Love for Country at Church Dedication, Confirmation of 62

The bishop of the Catholic Diocese of Uyo, Most Reverend John Ebebe Ayah, has called on Nigerians to commit to loving the country, especially since there is no other country they can call theirs.

The Catholic prelate in his homily at Regina Caeli Catholic Church, Shelter Afrique, Uyo, last Sunday, during the dedication of the church building, also urged Christians to show love to one another according to the commandments of Christ, instead of resorting to retaliation when hurt.

‘Retaliation,’ he said, ‘does not reflect Christ.’ 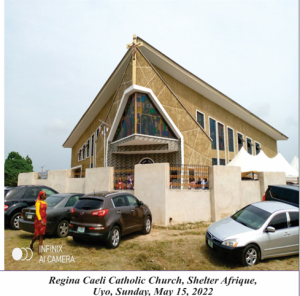 Bishop Ayah, who also administered the Sacrament of Confirmation on 62 faithful, stressed that it was out of love that the benefactors of the dedicated edifice made contributions, describing it as an expression of love towards God’s dealings with us.

The Uyo chief shepherd observed that Nigeria was blessed with numerous resources and further urged Christians to not only love people who showed love to them, but also people whom they perceived as unloving, more so, because Christ had given them the grace to love.

While challenging Christians to pray for the nation, he urged political aspirants, elected officers, and the governed to show love to the country, even as elections were around the corner. This, he said, would be a foundation for getting it right at the polls.

‘For who becomes president, governor, senator, we should try and get it right this time. You need God to help you achieve anything in life,’ he told those seeking elective positions.

The bishop decried several inadequacies in the nation, including the insistent strike embarked upon by the Academic Staff Union of Universities and expressed worry at the outcome, while he recalled that a priest of the diocese was recently released by abductors after several mediatory engagements.

In a related development, the chairman of the Parish Pastoral Council, Oliver Otu Udoukpo, in his remarks, said the success story of the building represented a metaphor of how the mustard seed grew into a mighty tree, adding that it was a testimony of their faith, determination, and grace.

He thanked and welcomed the bishop of Uyo, noting that he was the visionary of the church and that the vision became a reality under his watch. He also appreciated the parish priest and diocesan communication director, Rev. Fr Justin Udoma, who, he said, took up the job and did his best to see it through.

Other highlights of the event were the unveiling of a plaque with the names of over 400 benefactors, as well as the presentation of awards to some of them, including the state governor, Udom Emmanuel; wife of the former governor, Unoma Akpabio, among others.