Useful Lessons from Soludo’s Termination of Road Contract in Isuofia

Recently the social media went viral with a video of the Governor of Anambra State, Prof Chukwuma Soludo, terminating the road contract given to a local contractor for failing to deliver on time, a job given to him in Isuofia.

Despite the protestations of the contractor who tried to use the rains as an excuse, the governor told him to his face that a new contractor had been assigned the job. Soludo, while regretting that a local contractor had failed to manage his opportunity well, also berated the contractor for blocking both ends of the road and making road users to suffer without executing the job he was given.

We are particularly happy with the way the governor handled the said contractor who we shall use as a representative of others of his ilk who do not give their jobs the seriousness they deserve. Often times, people saddled with the responsibility of serving the public do so with utter disdain for the well being of the public.

As in this instance, the contractor quickly cut off both ends of the road and did not care a hoot about the fate of those using the road. 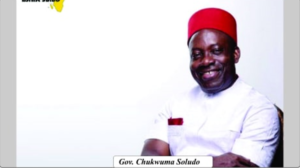 We have seen this same thing replicated in other places. In Awka, the Regina Junction was similarly cut off by a contractor for long without factoring in the suffering of road users who had to make long detours to connect to the Enugu-Onitsha Expressway. Same thing happened on the road in front of Millennium Industries, also in Awka.

In fact, we live in a society where no one cares for the well being of others. Those saddled with providing essential services to the public do shabby jobs that do not stand the test of time. That is why most roads in the country do not last long.

Soludo has been flagging off many roads in the state and has been promising to build roads that will last. He has also been patronizing local contractors to give them a sense of belonging. But we expect those local contractors to repay the faith placed in them by executing solid jobs, rather than shabby ones that will end up collapsing soon after they are done.

The speed with which Gov Soludo terminated the contract in question showed he is not ready to tolerate mediocrity and unseriousness. That is the way to go if, indeed, we hope to have the best.

We also urge the government to continue to monitor road projects to be able to take similar tough measures against unserious contractors.