Last Monday, the Anambra State governor, Prof Chukwuma Soludo, led a team of his appointees, including the Commissioner for Works, to inspect some roads in the Okpuno/Nodu axis in Awka South Local Government Area of the state.

Those roads are among the worst to be seen anywhere in the capital city and environs despite having some of the biggest human populations in the capital city. Indeed, there is no where anyone can take to avoid the gaping potholes and broken down roads in that axis and it has got so bad that many people are now reluctant to go there.

It must therefore have come as a huge relief to residents of the area, as well as those doing business there, to see the governor and his team coming to inspect the roads. 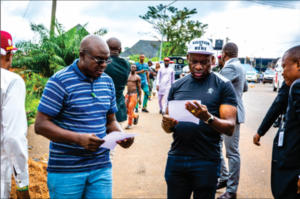 At the visit, Gov Soludo reiterated his resolve to construct durable roads in the state, noting that he had already flagged off the construction of roads in other parts of the state. Those who live or do business in the Okpuno/Nodu axis will no doubt be raring to see action commence on those roads.

The area hosts many important institutions like a seminary, many churches, schools and markets, as well as a cluster of big and small businesses, including big hotels. Some of the big businesses and hotels there include Millennium Industry, Geneva Hotel, St John Hotel, De Limit Hotel, Vienna Hill Hotel, among others.

It is also where the Arch Bishop Albert Obiefuna Pastoral, Retreat and Recreational Centre is situated, as well as the state secretariat of the Nigeria Union of Journalists, NUJ. There is therefore no gainsaying the fact that the bad roads there have been hindering business and commercial activities in the highly populated area.

The roads are in such a bad condition that very soon, if no action is taken, there will be a total collapse.

We are happy therefore that Gov Soludo has deemed it fit to visit the area and see things for himself. We are happier still that he has promised to tackle the situation.

Government intervention on those roads has been long overdue and if the government of the state tackles them as promised by Mr Governor, it will be a win-win situation to both the government and the governed.

We therefore implore the Soludo Administration to quickly begin the construction of those roads in earnest to save the residents and those doing business there from further hardship.