Speaking at the well-attended event, Ozigbo expressed excitement at having Unusual Praise, launched in 2011, in his home state.

Ozigbo, accompanied by his wife to the event, also presented an additional cash grant of N1 million to ten recipients of this year’s Unusual Entrepreneur, a youth business development initiative aimed at empowering budding business owners.

He described Unusual Praise as an avenue to praise God in an uncommon manner; even as he disclosed plans to achieve several other objectives, including the propagation of the gospel of Christ.

‘For those of us who are usually busy, Unusual Praise presents an opportunity for us to devote an evening to thank God for all he has done for us and prepare for the coming year. 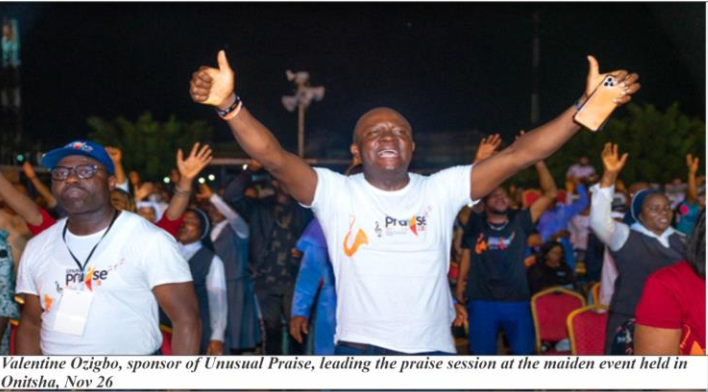 ‘It is also an avenue for us to identify those who need help in their businesses and empower them. In 2018 when I chaired this event, we had the privilege of setting up the Unusual Entrepreneur Platform and I am incredibly pleased to be present as it is being held in my home state, Anambra,’ Ozigbo explained.

He said the platform aimed to empowered and make an impact using beneficiaries’ chosen businesses.

‘Significantly, this empowerment is coming from the Church because it is crucial to combine hard work and faith to achieve powerful results.

‘It is also important that you stay focused and listen to advice from your mentors. The mentorship that comes with the cash grant is key to your progress and I am offering myself to be one of your mentors,’ Ozigbo, a multiple award-winning global CEO, said to a rapturous applause from the crowd.

In his brief remarks, the Archbishop of the Catholic Archdiocese of Onitsha, His Grace, The Most Rev Valerian Okeke, appreciated the organizers, musicians and congregants, for coming together to worship God.

His words, ‘I thank you all for making this night of worship, praise, and thanksgiving possible. Thanksgiving is the best form of prayer. The more you give thanks, the more blessings you receive.’

The annual musical showpiece is organized by the Catholic Church of Divine Mercy, Lekki, and Onitsha’s event was the first time it was held outside Lagos. This year is also the first double edition of the event, with the Lagos edition scheduled to hold on Friday, December 10, 2021.

While speaking to journalists later, Mr Ozigbo, who was the candidate of the People’s Democratic Party in the just-concluded Anambra governorship election, explained that his sponsorship of Unusual Praise had no political undertone as he had been a part of the programme for several years before his foray into politics.

‘It is a thing of joy to see that people can come to church to receive spiritual edification, but also get economic uplift,’ Ozigbo said, noting that since 2018, he had been part of Unusual Praise. He pledged to continue helping to sustain the programme.

“We tried to bring Unusual Praise to Anambra last year, but COVID struck, and we couldn’t achieve that plan, but I am grateful to George Agu, the Chairman of Unusual Praise 2021, for making it possible.

“I am a proud sponsor of Unusual Praise, and I will always be a part of this biggest Catholic gospel event in Africa where children of God can come and uplift their souls.

‘I will also be providing mentorship to the winners of Unusual Entrepreneur. In business, counsel, advice, and mentorship are more valuable than money. For someone who is running a budding business, I will provide guidelines to help their businesses grow, and if it is an industry I am not familiar with, I will get the right people to give them the mentorship they need.

‘We are also here to pray for our leaders and those in authority. We need peace and visionary leadership where nobody is marginalized,’ Ozigbo added.

Several dignitaries attended the event, including the immediate past governor of Anambra State, Mr Peter Obi.