The Vice Chancellor of Nnamdi Azikiwe University, Awka, Prof. Charles Esimone, said he would lead the charge for the participation of women in politics and leadership positions, even as he called on the National Broadcasting Commission (NBC) to allow campus radio stations to engage in commercial activities and advertisements.

The Vice Chancellor who stated this during a One-Day Workshop organized for Journalists practicing in Anambra State by the Association of Commonwealth Universities (ACU) in collaboration with Nnamdi Azikiwe University (UNIZIK), Awka, said the commercialization and removable of ads content had adversely affected the University owned radio stations and had stopped them from operating maximally and optimally. 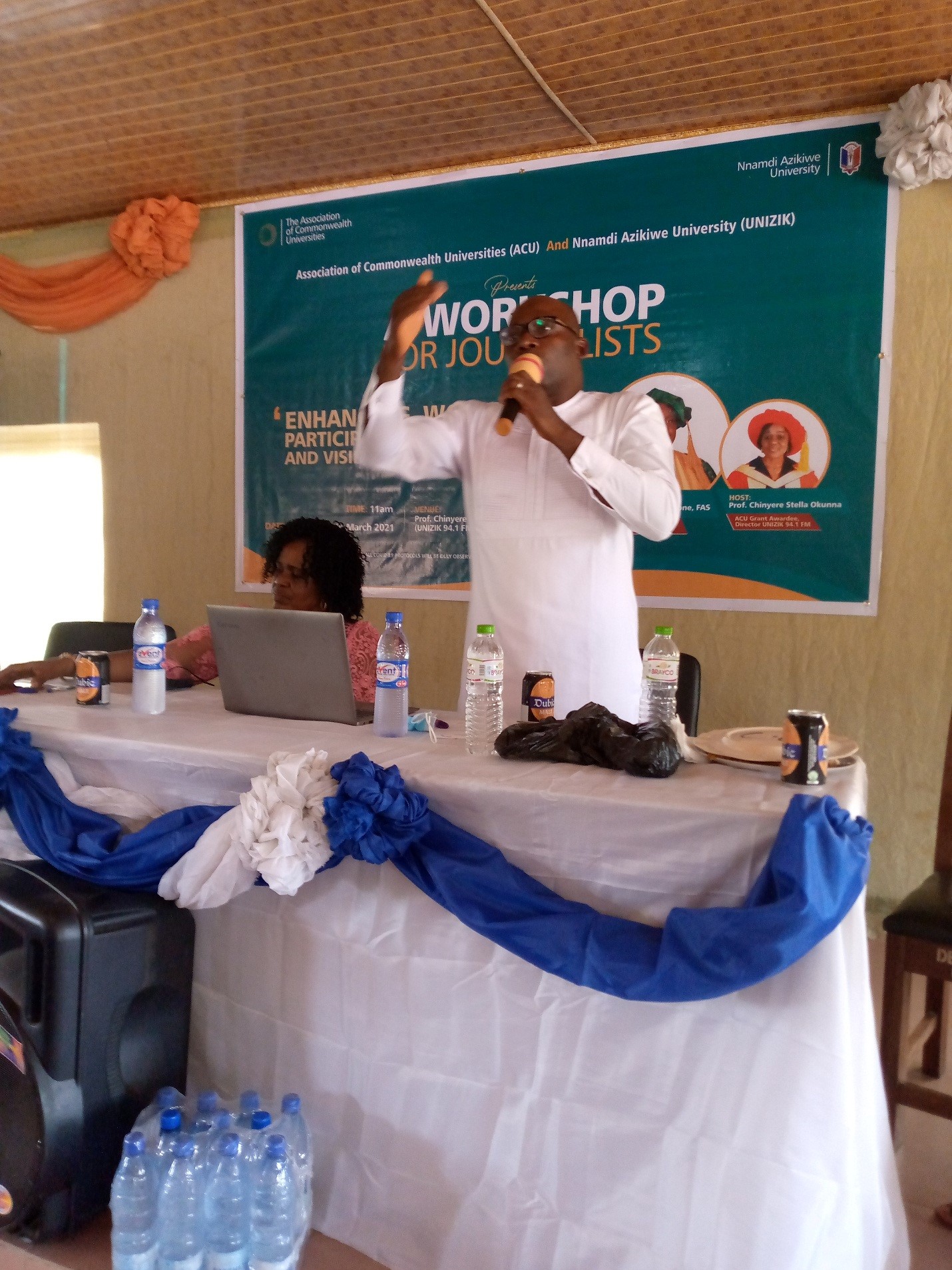 The Vice Chancellor paid glowing tribute to journalists and media houses in Anambra State, describing them as the watchdog of society, even as he appealed to them to help in publicizing the policies and programmes of the University, saying that with the power of the media, the call for women’s participation in politics and visibility in leadership would not go unnoticed.

The workshop which was attracted by the former Dean of Faculty of Social Sciences, Professor Chinyere Stella Okunna, had “Enhancing Women’s Participation in Politics and Visibility in Leadership” as its theme.

Earlier, the workshop host, Prof Okunna, thanked the media, which she described as her primary constituency, for the job they had done so far in setting agenda that had helped in shaping society. Prof. Okunna, an ACU awardee, appealed to the media to use their platforms to promote, project and publicize the event.

The University don who reeled out some factors militating against women’s involvement in politics and leadership positions, said that low self-esteem, cultural mindset, lack of financial muscle, and fear, as some of the impediments holding women down.

The Mass Communication expert charged the women to leave their comfort zones and compete favourably with their male counterparts, saying that by doing so they would make a bold statement and thereby occupy elective and appointive positions.

For her part, the Head of Mass Communication, UNIZIK, Prof Chinwe Uzochukwu, enjoined all to seriously take the message of the workshop to all nooks and crannies of the state, urging the participants to encourage women who were out to occupy positions, whether elective or appointive. She thanked Prof Okunna for initiating the workshop.

In a paper presentation delivered by Chinedu Ekwealor, PhD, he said that women should desist from playing second fiddle when it came to leadership, urging them to prepare adequately and then wait for the opportunity and right time to compete.

Reactions by Participants, including the Editor-in-Chief of Fides Newspaper, Hon. Jude Atupulazi; brainstorming session, and presentation of certificates, formed the highpoints of the workshop