The Vice Chancellor of Nnamdi Azikiwe University Awka, Prof Charles Esimone, has showered encomiums on the chairman of Anambra State Football Association, ANSFA, Chikelue Iloenyosi, for what he has been able to achieve so far in the development of football in the state, especially at the grassroots.

The Vice Chancellor made this known when the FA boss paid him a courtesy visit in his university office in Awka. He described Iloenyosi as the perfect fit for the position in the state now more than ever before.

‘To be honest, I have been following your developmental programmes that you set up within 3 months of taking charge. You have shown passion for this job and it’s only natural that you will succeed.

The joys of those kids that I saw will continue to speak for you. Having said all this, there are a lot of places that we all can work together. When I came in as the Vice Chancellor, sports was not included in the university yearly budget. I changed that.

‘Now, we are giving special admission concession to highly sporting inclined students. I set up a scholarship scheme to reward sporting excellence. Any individual or group that wins anything for this institution will be given scholarship. 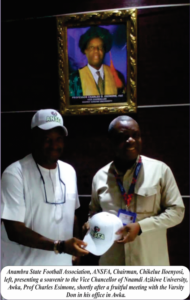 These things will go a long way in encouraging these athletes. Sports is a unifying factor and we have to take leverage of that. The NUGA hierarchy paid me a courtesy visit last week and I made a promise that we will host the South East NUGA Games next year and I will be knocking on your door to work with us on a bigger capacity to make it memorable. I believe in your capacity and reach and it will count as part of your numerous legacies.

The FA chairman, Iloenyosi, thanked Prof Esimone for playing host to him and his entourage and praised him for the giant strides he had achieved in sports in the institution since he took over as Vice Chancellor.

‘My Vice Chancellor, I thank you for hosting me and my staff today. I have only but sincere kind words for you. You have shown great interest in sports and the result of this your interest is evident in so many areas. Your institution has the best female team in Nigeria.

I saw them play at the NUGA Games in Lagos and I was highly impressed. I have seen old sporting infrastructure taking a new look and new places of play being erected. That shows your commitment to sports in this institution.

I can’t say no to you. In any capacity you want me to work for a befitting Southeast NUGA Games next year here in Awka. Just let me know. We have a lot to do in terms of partnership to make football and sports grow in this institution.

That will make Nnamdi Azikiwe University, Awka a benchmark of sporting excellence in this country,’ Iloenyosi said.

The FA chairman and his delegation were taken on an inspection tour of some sporting edifices in the campus by the University Director of Sports, Mr Kenneth Ogbonna. Part of this delegation included the LFC chairmen of Njikoka, Idemili North, and the acting secretary of the FA, Mr Raph Nweke, among others.