Members of Senior Staff of Association of Nigerian Universities (SSANU), Nnamdi Azikiwe University, Awka Branch, have said that any attempt by the Federal Government of Nigeria to introduce salary discrimination and disparity in the university system would be stiffly resisted.

They advocated for Personnel Payroll System (U3PS) as a payment platform for university workers, noting that the formula took cognizance of the system’s peculiarities.

Addressing newsmen in Awka, the chairperson, SSANU, Unizik Branch, Comrade Dr Njideka Nwangwu, said the current strike which they started on the 27th day of March, 2022, was necessitated by, but not limited to the following facts: Need for increase in their take home salary which, they said, could no longer take them home.

She gave the details as follows: ‘Renegotiation of the FGN/SSANU and NASU Agreement. Inconsistencies in IPPIS payment platform, hence the universities’ Peculiar Personnel Payroll System (U3PS) as a payment platform for university workers because it took cognizance of the system’s peculiarities. 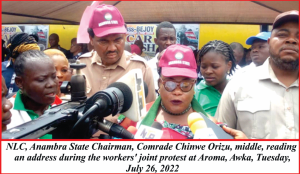 ‘Payment of Arrears of Earned Allowances and its implementation on a monthly basis to avoid further accumulation of arrears.

‘Improved funding of universities (especially state universities). End to usurpation of the headship position of the Non-Teaching Units and Offices contrary to the provisions of the Conditions of Service and Establishment procedures.

‘Delays and Non-Payment of members’ retirement benefits. Proper constitution of Visitation Panels to universities and prompt release of White Paper. Non inauguration of the Governing Council of the Federal University of Agriculture.

‘Non-mainstreaming of members in some Demonstration Staff schools in violation of NIC judgment.’

According to the SSANU boss, the Federal Government had been adamant to the plight of the education sector in Nigeria, most especially, the University sector and It recently constituted the Nimi Briggs Committee to renegotiate the 2009 FGN/University based Unions Agreement.

‘To me, the Committee has planned to create more troubles in the university system by planning to create disparity in the % increase in the workers’ salary as evidenced in the rumored report.

‘SSANU is a Union for all senior administrative, professional and technical staff in the university and includes among others, the registrars, bursars, directors of different administrative directorates, doctors, nurses, auditors, administrators, accountants, engineers, legal officers and so many others who hold different degrees as B.Sc, M.Sc, and Ph.D. in their different professions and areas. In fact, SSANU members are the hub of the university administration and should not be relegated to the background.

She urged the Federal Government to urgently renegotiate with all the university based unions in a fair manner that would ensure the resumption of full academic and administrative activities in the universities.

‘It is a very critical and challenging period in the life of the Nigerian public university system and I sympathize with Nigerians, most especially, our children, for those years that are wasted which are irreversible – bearing the Latin adage of “tempus wastere, non-regemus” in mind. Also, to the parents of which I am one, we are not finding it funny with the current salary; that is why the struggles should continue for all round improvement.

‘May God restore whatever we lost for the cause of this struggle in folds, amen,’ she prayed, while enjoining students, parents and other stakeholders to bear with them in their struggle.