Many people struggle with low self-esteem — a persistent belief that they’re not good enough, worthy enough, or not lovable.

And while most of us assume low self-esteem is a fixed personality trait — something you’re stuck with for life — nothing could be further from the truth:

When you understand what really causes low self-esteem, you can take steps to improve it. Below are signs according to Nick Wignall that suggest that you have low self-esteem. Learn to identify these in your own life and you’ll be on the road to cultivating healthier self-esteem.

Low self-esteem is often a failure of imagination.

If you’ve struggled with low self-esteem for much of your life, those beliefs and feelings of being less than are what you know best. And so they feel very real. On the other hand, imagining your future self with higher self-esteem feels distant and unreal. But here’s the thing…

How you feel about yourself is not always a very good indicator of your true value.

People with healthy self-esteem know that just because they feel bad doesn’t mean they are bad. They know that just because they’ve been one way in the past says nothing about how they are destined to be in the future. And they don’t overprioritize their past selves at the expense of their future selves. When you define yourself by your past, you give away control over your future. 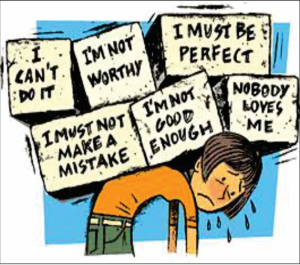 When you avoid the things that matter most, it’s often a sign that you don’t trust yourself.

Of course, we all procrastinate. But people with low self-esteem often have a strange pattern to their procrastination: They get the mundane, everyday stuff done on time (paying the bills, finishing those weekly reports, etc.) but they procrastinate on the activities they care most about (creative hobbies, travel, learning, fitness, etc.). And the reason…When you have low self-esteem, you don’t trust yourself with your most important goals.

On the other hand, people with healthy self-esteem trust themselves to pursue their passions even if it means failure, mistakes, or frustrations. They’ve built up the confidence to go after the things that matter most to them despite the possibility of failure, embarrassment, or mistakes. Healthy self-esteem means you define yourself by the pursuit of your passions, not the end results.

Being overly critical of others is usually a primitive strategy for boosting your own ego.

Obviously, we all need to think critically sometimes. But there’s a big difference between thinking critically and being critical: Helpful criticism is about making the world a better place. Unhelpful criticism is about making yourself feel better. People with low self-esteem have a hard time feeling good about themselves. This means that they sometimes get in the habit of criticizing others as a way to make themselves look better in comparison. For example: when you criticize someone’s opinion for being stupid, you’re implying that you’re smart — and that feels good. The trouble is that being critical of others as a way to boost your own self-esteem is only temporary. And after that, you usually end up feeling even worse about yourself. If you tend to be overly critical of others, ask yourself this: When I criticize other people, am I trying to be genuinely helpful or am I trying to make myself feel better?

Boundary-setting issues are usually self-respect issues in disguise. Most of us know that it’s important to set healthy boundaries, especially with difficult people in our lives. The trouble is, even if we set a healthy boundary, the hard part is enforcing it. And the reason…If you don’t enforce boundaries, it’s because you value other people more than yourself.

But here’s the strange part: If you find yourself in this position — not having enough self-respect to enforce your boundaries — the best way to get it is to set and enforce healthy boundaries!

The trick is to start very small and work your way up. Work on returning that Starbucks But people with low self-esteem often treat even minor decisions as if the fate of the world rested on them. When you enforce a healthy boundary, you reinforce the belief that you matter just as much as anyone else.

Indecision goes hand-in-hand with poor self-confidence. Some decisions in life are hugely important and impactful — whom you choose to marry, whether to try heroin or not, quitting your job to start your own business. These are big-time decisions with big-time consequences. And it’s perfectly understandable for people to experience some mental back and forth between deciding.

But people with low self-esteem often treat even minor decisions as if the fate of the world rested on them.

Of course, we all benefit from the support of people around us. But when you rely on it, you give up the opportunity to practice those essential skills for yourself. And the result: low confidence in your own ability to handle stressors and challenges. And eventually, low self-esteem along with it. There’s nothing wrong with asking for support when you really need it. But it’s unwise to rely on it.

Difficulty taking compliments is often an indicator of low self-worth.

If compliments tend to make you uncomfortable and squeamish, it’s likely a sign that you either don’t think you deserve it or you’re worried that other people will think badly of you if you do. But whether you don’t respect yourself enough, or you respect other people’s opinions too much, the end result is the same: low self-esteem.

Taking compliments well means a healthy respect for yourself and the opinions of others.

Luckily, taking compliments well is something you can practice and get better at. Instead of making excuses for yourself or downplaying your achievements, taking a compliment well is often as simple as smiling and saying “thank you.” And the more you practice, the more you’ll start to believe that you are actually worthy of all those compliments you get. A compliment accepted is a vote of confidence in yourself.

All You Need to Know

Of course, self-esteem is a complex phenomenon: there are many reasons why people can experience low self-esteem that aren’t listed here. And just because you exhibit some of these things doesn’t mean you have low self-esteem.

But if you do struggle with low self-esteem and aren’t sure why, the seven signs listed above may be useful in helping you better understand what habits and tendencies are contributing to your self-esteem issues. And more importantly, they may give you a starting point for where to begin working to build healthy and high self-esteem.

One final thought: When it comes to building healthier self-esteem, don’t overthink it. As naval once said: self esteem us just the reputation you have within yourself.