The traders locked the entire market and protested on the streets of Umunze over the demolition of some sections of the market and forceful relocation to a new site. They called on Governor Willie Obiano to intervene on the matter and also help release the chairman of the market, Mr Obioma Okoli, who was arrested on what they termed trumped up charges. 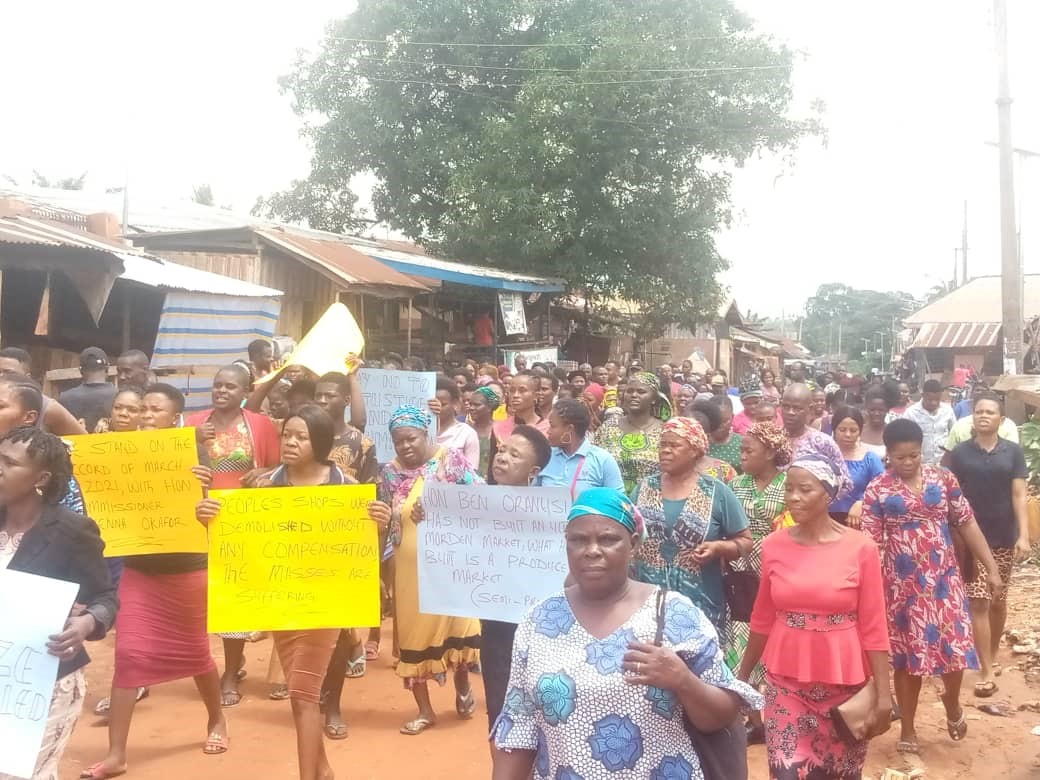 Umunze traders during their protest against the relocation of their market and demolition of some shops, July 16, 2021.

Leaders of the market, including Izuchukwu Nwankwo, Okey Nzebafor, Ikechukwu Anichebe, Gladys Nzekwe and Uchendu Emenike, who spoke to journalists, said a developer, Mr Ben Oranusi, who is building a new market, was responsible for their troubles. They accused him of wanting to forcefully relocate them to his market.

One of the traders, Izuu Nwankwo said: ‘We (traders) are not against having more markets in the this town, but this traditional market that was established about 50 years ago should not be demolished just because a new one has been built.

‘If the new ultra-modern market becomes fully occupied today, will the developer be happy if another one is built later and his own demolished? He should allow us to carry out our business here, while new people can occupy that one.’

Another Trader,  Okey  Nzebafor, who was  a one-time chairman of the market, said the market leaders and the town union leadership had reached an agreement with representatives of the state government for the two markets to coexist but the developer was going contrary to that agreement.

He said, ‘Some of us are ready to take up shops at the new market when completed. Other people from other towns will come to trade there too and it will be a big market; so let the developer complete it first because, as it is now, nobody can trade there.’

The women’s leader in the market, Mrs Gladys Nzekwe, urged Gov Obiano to wade into the troubles in the market and also help release the market’s chairman.

‘They came and arrested our chairman, saying that he came with guns and all manner of dangerous weapons to attack Ben Oranusi in his house. For close to two weeks now he has been in detention.

‘Even members of the executives of this market were also invited to the police station for the same allegation, but they later withdrew the invitation.

‘We are no longer comfortable in this market, let our amiable governor come to our aid, help release our chairman and also restrain Ben Oranusi from terrorizing us every day,’ Mrs Nzekwu said.

When Fides sought the reaction of Oranusi, he denied allegations of arresting anyone or even demolishing a section of the market. He also said there was no truth in the allegation that he was coercing the traders to move to Umunze Utra-Modern Market.

‘I do not have the powers to demolish the market or even force them to relocate to the ultra-modern market. It was the state government that demolished the market and also asked the traders to move.

‘The leaders of this community met and were unhappy about the spate of accidents in that section of the town because of the congestion of that market.

‘Often people are killed. You should have seen that the people trade on the main road, so the community decided to get a new place. We have every facility that is needed in a modern market, but the people insist on staying in that dirty environment. It is government that is moving them, not me,’ he said.