A frontline governorship aspirant on the platform of the People’s Democratic Party, PDP, Dr Godwin Maduka, is to work in concert in with the traditional ruler of Umunze, Igwe Promise Eze, in enthroning peace and security ahead of the coming governorship election in the state, Jude Atupulazi reports.

This was the outcome of a meeting between Maduka and the traditional ruler during the former’s courtesy visit to the monarch at his palace in Umunze, Orumba South LGA of the state, Friday, January 22.

They agreed that only a united front in an atmosphere of peace, sheer brotherhood and security would guarantee a peaceful election and victory for Dr. Maduka.

In a Royal blessing, Igwe Promise Eze who expressed his delight that Dr. Maduka, whom he described as an illustrious son and the largest land owner in Umunze, was contesting the governorship position, endorsed Dr. Maduka’s candidature. 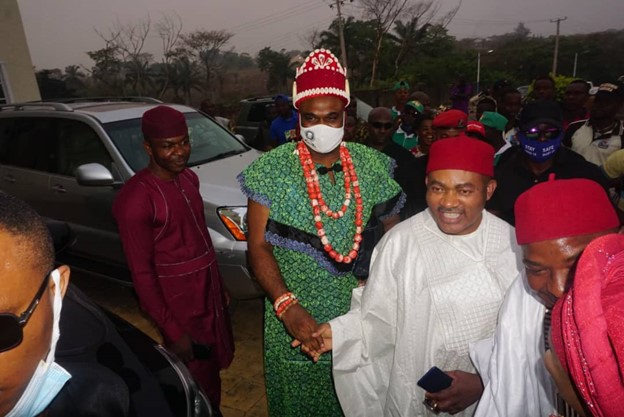 Dr Godwin Maduka, 2nd from right, welcoming some visiting monarchs to his home in Umuchukwu, Jan 22, 2021.

Igwe Eze who further described Dr. Maduka as a rare breed and a blessing to Orumba South, his paternal heritage, urged Dr. Maduka to continue to shine even brighter in the quest to establish transformational leadership in Anambra State.

‘Dr. Godwin Maduka’s philanthropic gestures are exceptional. I urge stakeholders in Anambra State politics to support Dr. Godwin Maduka who has an undefiled political pedigree and in the interest of rotational power policy in the state,’ he pleaded.

In a related development, Orumba North and South traditional rulers have honoured the invitation of Dr. Maduka to his palatial home at the Lion’s Den in Umuchukwu.

The royal fathers who prayed for the success of Dr. Maduka in the 2021 governorship election, dined and wined with him.