A UK based medical doctor and a chieftain of Abagana Community, Chief. Dr. Florence Nwakaego Nwako-Oraelosi, has donated a hostel block to Stella Maris Girls’ College, Abagana, to immortalize the efforts of her late mom and those of four other women which gave birth to the establishment of the College.

Dr. Nwako handed over the keys of one story building to the Catholic Diocese of Awka at the College premises on Sunday, December 19. Fides gathered that sequel to the handover, the hostel block would be managed and maintained by the Manager of the College, Rev. Fr. Augustine Oguine. 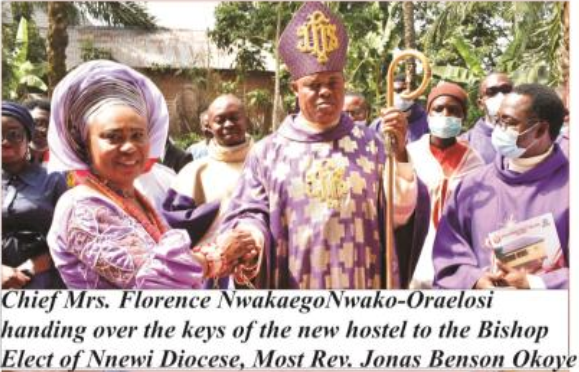 Handing over the keys of the hostel block, Dr. Nwako said she ventured into the project as a way of contributing to humanity in order to help the less privileged in society, saying that the burden and levy of getting the hostel project would have been too much for the students.

She noted that Stella Maris College was selected for the project due to her passion for girl-child education and assured that more projects would be executed for the good of the students as she had adopted the school for all her pet projects.

The Abagana chief explained that the funds which were sent for the project could have been reduced to nothing if not for the managerial skills and eagle eye with which the project was executed, saying that the manager performed a miracle. 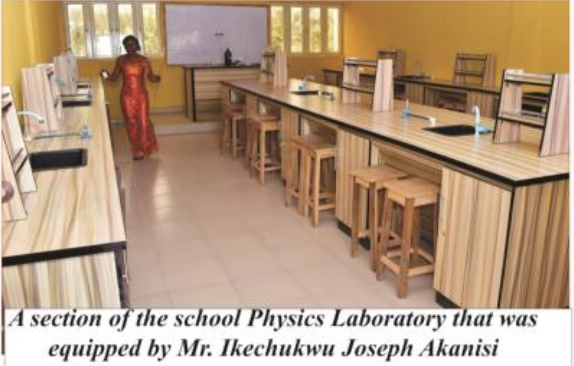 She commended Fr. Oguine for the detailed explanation of how the funds meant for the hostel project was utilized and thanked him alongside the Management Team for their efforts in assisting the students to actualize their dreams and purpose in life.

She recalled how she took up the project after the meeting she had with the School Manager, Fr. Augustine Oguine, who informed her of the role her mother, alongside four other Abagana women, played in starting up the College and said that the hostel block was to immortalize her mother, Lady Elizabeth Nwako.

Receiving the keys of the Hostel on behalf of Awka Diocese, the Bishop-Elect of Nnewi Diocese and the Auxiliary Bishop of Awka Diocese, Most Rev. Jonas Benson Okoye, appreciated the donor and urged the School Manager to take proper care of the project. He disclosed that the diocesan bishop placed much value on gifts geared at developing areas were young minds would thrive.

He said that the hostel building would enable the College to actualize its intention of accepting boarders in the next academic session and said that boarding schools helped in the holistic formation of the students. 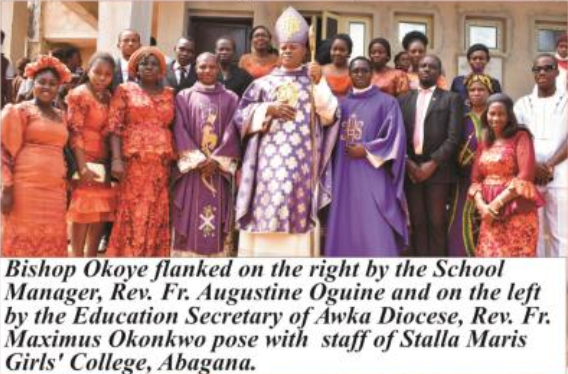 He expressed conviction that the incidence of bullying and other vices were greatly limited in Catholic schools as the students were trained the same way seminarians were also trained.

Speaking to Fides, the Manager of the College, Rev. Fr. Augustine Oguine, said he was able re-engineer activities in the College through the direction and grace of God.

He refuted the claim made by some persons that the school seemed abandoned before his coming, saying that he was working on what was on ground. He noted that the College was able to move from the CWO Hall located at St. Mark’s Parish, Abagana to the College site due the generosity of people who contributed resources.

While appreciating the hostel donor, Fr. Oguine disclosed that the College would run a day and boarding programme concurrently to give Abagana indigenes residing in other places and neighbouring communities the opportunity of sending their wards. 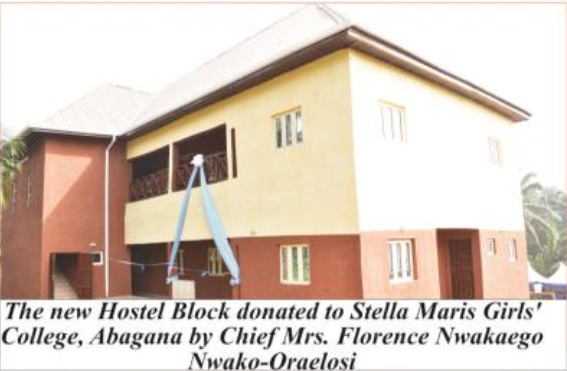 He disclosed that boarding programme would commence by September and said there were plans of expansion for more developmental projects.

Contributing, the Secretary of the School Board, Mr. Alfred Maduka Obuka, thanked God for the heights which the college had attained and recalled that the college started with 14 students at St. Mark’s Parish premises.

He described the present Manager as a game changer in the college who brought about an increase in population and development of structures.

For his part, the Traditional Ruler of Abagana Community, Sir Patrick Mbamalu Okeke, said he foresaw a more outstanding development and progress in the school, saying that the Manager has a unique of endearing people to key into the school project.

The College Laboratory was also blessed during the handover of the College Hostel while award presentations to the benefactors and benefactresses, among others, were the highpoints of the celebration.