U.S. Bishops Express Solidarity with People of Burma after Coup

The U.S. bishops’ conference expressed solidarity with the people of Burma on Tuesday, one month after a military coup seized control of the country.

“On behalf of the Committee on International Justice and Peace, I wrote a solidarity letter to the Catholic Bishops’ Conference of Myanmar and have asked U.S. government officials to carefully consider the insights the local Church can offer towards achieving a just resolution to the current crisis,” said Bishop David Malloy of Rockford, Illinois, chairman of the U.S. bishops’ international justice and peace committee. 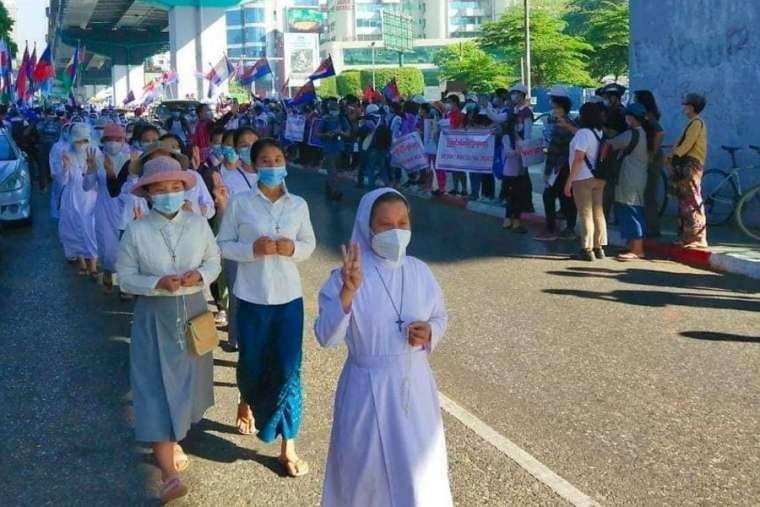 “As protests continue in Myanmar, I call on all Catholics and people of good will to pray for the people and leaders of the land,” he added.

Burma—also referred to as Myanmar—has a relatively small Catholic population, which has been vocal in their opposition to the coup and in support of a return to democracy. Protests in the Southeast Asian country have been ongoing since the Feb. 1 coup. Christians form only around 6% of Burma’s majority-Buddhist population.

Catholic nuns have also taken part in the protests. The Vatican newspaper on March 1 published reports of Sister Ann Nu Thawng, a member of the Sisters of St. Francis Xavier who knelt before advancing police officers and asked them not to hurt protesters; the act reportedly took place in Myitkyina, the capital of Burma’s northern Kachin State.

On Feb. 11, the Sisters of St. Joseph of the Apparition Myanmar prayed and protested outside of the Chinese embassy in Mandalay.

Bishop Malloy noted that Pope Francis was among the people who had condemned the coup, and had called for peace.

“I echo the call by the Holy Father and the bishops of Myanmar on the need for dialogue as a way forward toward peace and reconciliation,” he said.

At least 18 protesters were killed and 30 people were wounded on Sunday when police fired live rounds and used non-lethal force against the crowds, according to the UN’s human rights office.

On Sunday, Burmese Cardinal Charles Maung Bo of Yangon proclaimed that “Innocent blood may not be spilt on this land.” The cardinal, who is a longtime supporter of democracy in the country, lamented that “so much of pain, suffering, and resistance” had occurred since the coup.

Cardinal Bo is also the president of the Federation of Asian Bishops’ Conferences.

He also lamented the “violence” in online discourse. “Social media, especially Facebook, is a virtual hell where hatred rules supreme; good people become violent in that virtual hell, destroying others. Humanity is disfigured in Facebook,” he said.

According to the UN, more than 1,000 people in Burma have been arbitrarily arrested and detained in the month since the coup began.