There have been varying ideas of who the perpetuators of violence in the Southast are, and this has led to the term, unknown gunmen.

While many believe that the insecurity in the Southeast is the handiwork of the secessionist group, Indigenous People of Biafra (IPOB), others are of the view that those responsible are common criminals hiding under the guise of freedom fighting to make huge gains off their criminal enterprise. But yet another set of people believe that the Southeast has been infiltrated by a bunch of blood suckers who are mostly of Fulani origin and whose goal is to conquer and dominate the region.

For close to two years since after the EndSARS protest in October 2020, the Southeast has come under serious security threat, leading to the invasion of communities, destruction of property, kidnapping and killing of prominent individuals, while the lucky ones were let off the hook after payment of ransoms.

There have also been communities whose bushes have been annexed and made into camps where the criminals stay and perpetrate their criminal activities. Many roads within 2021 and 2022 were declared unsafe because of the nefarious activities of criminal elements, while in many communities in Anambra, Enugu and Imo States, residents abandoned their homes because of the level of insecurity.

Depending on the method of perpetration of crime and the localities, many people have accused different groups of being responsible. For example, in parts of Nsukka in Enugu State, the killing of people in Ehamufu area have been attributed to Fulani herdsmen who are said to have sacked communities and killed many. In the Orlu area of Imo State, the secessionist group, IPOB, and their militant organization; Eastern Security Network (ESN) has been fingered for the level of criminal activities in the area. Also in Ihiala and Nnewi South areas of Anambra State, the criminal acts of killings, kidnapping and robbery have been largely heaped on ESN too.

On the other hand, in defence of itself, IPOB has repeatedly insisted that the ESN operatives only live in bushes, guarding the territory from invading terrorist Fulani herdsmen, while turning around to accuse the Southeast zonal militia created by Southeast governors, known as Ebubeagu. Repeatedly, IPOB through its spokesperson, Emma Powerful, claimed that the Southeast governors created Ebubeagu to whittle down the powers of ESN, including killing its operatives, just to give the invading Fulani herdsmen the opportunity to have a free reign in the zone.

In the face of this, a human rights group, International Society for Civil Liberties and the Rule of Law (Intersociety), in a recently unveiled 27-page investigative report, stated six categories of people causing insecurity in the zone.

Though the group failed to expatiate on the identities of the mentioned groups, it was gathered that blame was mostly on security agencies and their commanders, while governments of the Southeast states were blamed for the sponsorship of fake agitators, just to foment trouble in the zone.

The group said Eastern Nigeria was found to have been flooded by what it referred to as government backed armed counterfeit agitators, or ‘government unknown gunmen’, which, they said, have a strong base in Ebonyi and Imo States.

Umeagbalasi said, ‘There seems to be a symbiotic atrocious conduct relationship between Ebueagu, military/police and jihadist Fulani herdsmen who are wreaking havoc in the Southeast forests and bushes. Since January 2022, the Nigeria State backed armed counterfeit agitators, government unknown gunmen and street criminal entities hiding in bushes, have jointly abducted at least 1,000 defenseless persons and killed 600, out of which armed counterfeit agitators, government unknown gunmen, took responsibility for 300 abductions and 200 deaths.

The armed counterfeit agitators also targeted security personnel on duty for attacks, and out of 300 abductions, about 100 deaths occurred in their captivity hideouts as against civilian deaths recorded on their open attacks.’ 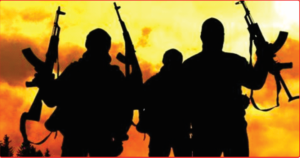 Separatist elements, including ESN, were almost totally exonerated from the crimes in the zone by the group, but Umeagbalasi insisted that what is seen as violence by separatist groups are actually persons sponsored by Nigeria security agencies and their commanders and the governments of the Southeastern states, most of whom, he said, turn around to target security operatives, maybe to give the zone a semblance of a highly insecure area.

However in what appears to put holes in the position of Intersociety about Nigerian government being behind some of the attacks, the Auto Pilot faction of IPOB led by Finland based Simon Ekpa has been making no pretence of being behind most of the attacks on police stations and security personnel.

Ekpa has been often seen on social media threatening attacks on security personnel, as well as threatening to stop elections in the Southeast Zone through recourse to violence. He has also been championing the sit-at-home phenomenon which was started by the Nnamdi Kanu led group before it jettisoned it.

Ekpa, being an Igbo from Ebonyi State, has proved that it is Igbo people that have been behind the violence in their zone and not outsiders; a position also held by Anambra governor, Prof Chukwuma Soludo.

Also, it is believed by many that even if there are some external forces like the Fulanis being involved in the insecurity ravaging the Southeast Region, such outsiders cannot be bold and comfortable enough to operate inside Igbo heartland if they do not have local collaborators as, indeed, has been discovered in some raids of criminal hideouts by security agencies. Some of these Fulanis are believed to be herdsmen looking after cattle owned by some Igbo big wigs in the zone. Such Fulanis are found in community bushes looking after those cattle owned by Igbo people.

It is believed that, while their Igbo bosses are unaware of their nefarious actions, they however collude with some renegade Igbo youths to kidnap people and share the loot; a development that gives fillip to the notion that no Fulani can be bold enough to operate beyond the limits of the law in Igbo heartland without the support of some locals.

This is away from the accusations by Intersociety on them. Soludo said the state was now about the safest state in Nigeria and that he would continue to ensure that criminal elements in the state were taken out.

There has been a controversy about the role of security agencies in the fight against insecurity in the state, which led to the deputy governor, Dr Onyekachi Ibezim, and the Commissioner for Information, Sir Paul Nwosu, calling out security agencies. While the Ibezim had openly confronted soldiers at a checkpoint, ordering its dismantling for causing huge traffic without apprehending any criminal, Nwosu described the checkpoints in the state as cash points instead.

But Soludo insisted that security operatives in the state had done well, saying that through their proactivity, his government had been able to take out criminals hiding in various camps in the state.

‘Nine months ago when I came into office, I announced that security, law and order are about the first key agenda. The difference as at now is like the difference between day and night. Before now eight LGAs were taken over by bandits and today those LGAs have been liberated and all the bandits taken out of their camps, and several of them have fled the state, while those who remained have been degraded. We are trying to keep our state safe, but you will never have a crime free state, but no state in Nigeria is safer than Anambra today.

‘I appreciate the law enforcement agents and all the enforcement teams and Anambra people who have risen up to the occasion to organize security and order. Our youths are taking their destiny in their hands. A criminal living in Finland declared a five-day sit at home last week, and the people of Anambra ignored him. Anambra people came out in droves to celebrate the Christmas and that is why the roads are busy. I commend the youth volunteers who have come to keep our streets clear.

‘We set out to take back our homeland and so far, so good. There are still challenges ahead and all hands must remain on deck. We will continue to provide support for all the security forces for all their commitment and sacrifices and all they do to keep our people safe and secure. Since they (criminals) have decided to operate in abnormal ways, we need abnormal solutions to tackle them.

As far as these continue, we will continue to have checkpoints and FOBs (forward operating bases), and we will continue to support security agencies. We appeal to criminals in the bush to come out. We give you the opportunity of retraining, and we offer you a new lease life. The course (criminality) you have taken will not take you anywhere, and this government is ready to work with you to give you a good future.’

True to Soludo’s rating, security in Anambra State has improved tremendously, with every community in the state swarming with holiday makers who came back for the Christmas. Sharing what he feels is the secret behind the success, Soludo during a casual discussion with journalists, insisted that when he assumed office, ‘Truth is, if you want to fight people like that, you first resolve within yourself that you are going to do it, and the second step is agreeing these people are criminals.

As far as we are concerned, they are criminals who see their activities as an enterprise. In their camps, you will see registers where they record the names of people they kidnapped, how much the victims paid and the balance left. So, these people are criminals.

‘I laughed within myself when they told me they want to be in charge of security in the state. And truly, those criminals had the power to take out anyone as at that time. That was why when we raided their camp in Aguluezechukwu and dislodged several of them in broad day light in what I describe as last kick, they went to Aguata Local Government Secretariat and burnt it and were shooting sporadically. That will show you the powers they had then. Today, we have gradually degraded them and the remnants of them have all fled the state, and today we are safe.’

Sharing a snippet of what he encountered during his first days in office, Soludo said, ‘We received all manner of messages from people who claimed to be freedom fighters. Many of them asked us to do away with federal forces, that they would help me secure the state. Others said they did not need anything like police, soldier and the rest. I received some other messages which told me not to deal with other groups, that they were the main groups to be dealt with and it continued like that. But our resolve was that these people are criminals and we cannot habour them.’

However, despite Soludo’s assurances that Anambra had become safe, the hoodlums seem to have upped their ante, with police stations in parts of the state recently coming under attack, amid continued kidnappings and cult related killings across the state, but especially in Awka capital city.

This is something the state government, many believe, still has to confront and overcome as it continues seeking solutions to the insecurity menace in the state.