For the about 85 years old needy widow of Enugwu-Ukwu, Mrs Rita Obioma Okafor, her years of hardship from climbing up and down the top hill to her old house is over. This is as St Francis’s Catholic Church, Enugwu-Ukwu, Njikoka LGA, Anambra State, on the occasion of the 2022 Feast of Saint Valentine, last Monday, February 14, donated a modern 2-bedroom bungalow with toilet facilities to her.

Handing over the keys of the new house to Mrs Okafor, the parish priest of St Francis’ Parish, Enugwu-Ukwu, Rev Fr Peter Val Uzoezie, said the suffering which the old woman who moved with the aid of walking stick underwent while climbing up and down the top hill to her house on daily basis necessitated the need for the new house that was built in a place with better topography.

Fr Uzoezie, who at the handover announced that he would take care of the upkeep of the woman for a specific period of time, stated the plans of the parish to turn the building to upstairs. This was even as he promised to seek for help from his friends and other individuals for the completion. 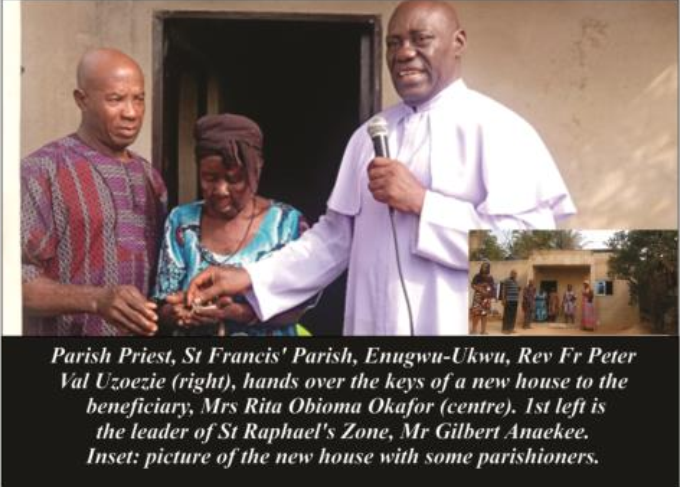 The parish priest appointed the zonal leader of the Zone, Mr Gilbert Anaekee (the zone which the woman belonged to), to assist him in taking care of the needs of the woman. ‘You have my permission to collect from the fathers’ house all that were required to take care of the basic needs of Mrs Rita Okafor for the period which I would take care of her upkeep. Make sure she never goes hungry, Fr Uzoezie tells Mr Anaekee.

Fr Uzoezie who equally donated some Valentine food stuffs, clothing and cash gifts to Mrs Okafor, said he would ensure that the woman had joy in her earthly life.

Responding on behalf of the members of St Raphael’s Zone of the parish, Mr Gilbert Anaekee, said he was delighted that a member of the zone was a beneficiary of such largesse. He commended Fr Uzoezie for what he described as his great demonstration of goodwill in the parish. According to him, the parish priests had remained an ideal father to the parish.

Fides gathered that the house which was started in 2018 during the time of the former parish priest, Rev Fr Thaddeus Oranusi, kicked off with the money donated by some Enugwu-Ukwu indigenes in diaspora.

In an interview with Fides, the beneficiary of the house, Mrs Okafor, said she was overjoyed to have benefitted so much from the Church.

Mrs Okafor, who was once a pagan, narrated how she had after a revelation she got in her dream in 2008, got converted to Christianity. According to her, she had a revelation where she saw a priest in her a dream and she had confessed her belief in God (three times in that dream), and in the next morning, agreed and became a Christian. She subsequently received the Sacraments of Baptism, Holy Eucharist and Confirmation.

Fondly known as America, the joyous Mrs Okafor, who danced and sang from the church to her new house, prayed for God’s continuous blessings and protection on Fr Uzoezie and all who donated to the house project. She promised to book Holy masses for them.

Mrs Okafor has four surviving children, out of which one is physically challenged.