Devotion to the Blessed Virgin Mary has its origin in God. Jesus who is God was the first Marian devotee and will be the last Marian devotee in divine and human histories. He is the first Marian devotee because He was Mary’s child in the flesh, and it was His word that was delivered to Mary by the Angel Gabriel in what we know today as the Angelic salutation (see Luke 1:26). He equally becomes the last Marian devotee because all devotions to Mary lead us back to Him. For Mary is only but a means of reaching Jesus who is the End, just like the same Mary becomes the means Jesus came down to save us by taking flesh from her to dwell among us (see John 1:14). In this way, the prophecy of Isaiah is fulfilled on the coming of the Redeemer through the means of a virgin’s womb (see Ịsa. 7:14). 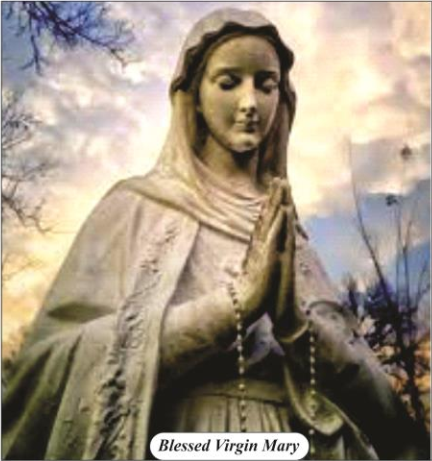 Therefore, there is nothing heretical to say that God Himself honoured Mary and wishes us to honour Her. This is what devotion to Mary is, and the reason we must honour Mary is because God honoured her first by choosing her as His own Mother. Consequently, it implies that Jesus who is God cooperated with the Eternal Father and the Holy Spirit in honouring her. The Eternal Father honoured her as His Daughter by choosing her to give birth to His Son. Jesus the Son honoured her as His Mother by requesting that she gives Him flesh. The Holy Spirit honoured her by forming Jesus in her womb by His power. This is why in the hymn, “Veni Creator Spiritus” (Come O Holy Spirit) composed by Blessed Rabanus Maurus, the Holy Spirit is venerated as “finger of the Right Hand of the Father” because He wrought the mystery of the Incarnation in Mary’s womb. If God was devoted to His own Mother, then we have to imitate what He has done.

What True Devotion is.

Marian Devotion in the Teaching of Saints

The Church which is the house of God is blessed with Saints who encourage us on the way to salvation. Many of these saints are known for their Marian devotions which are all True Devotions. Several of them have spoken of Mary in ways that inspire one’s soul. Some of them are as follows:

Several titles have been accorded to Mary by Saints because of her highest dignity as Mother of God.

Our Attitude Towards Mary

True devotion to Mary has a logic behind it. This logic is because she is Mother of God. It makes her enjoy the privilege of devotion called “Hyperdulia” (a higher form of veneration above Angels and Saints) because as St Alphonsus Liguori teaches, while collectively Angels and Saints pray as Servants of God, Mary alone prays as Mother of God. Jesus who was born is God, Mary who gave birth to Him is the Mother of God.  It is because She is God’s Mother, that the same God has also added all other privileges to be enjoyed by Her. This means that what Jesus is by nature, Mary is by grace, yet they were conferred on her by God – Jesus was born by Virginal conception, Mary was born by Immaculate Conception; He is Lamb of God, She is the fair ewe in the words of Merlito of Sardis; He is the Sacred Heart, She is the Immaculate Heart, He is the New Adam, She is the new Eve, as Adam and Eve stand beneath the Tree in the Garden of Eden, so do Jesus and Mary cooperate on the Tree of  the Cross; He underwent Passion and was crucified, She underwent sorrows and her heart was pierced; He Ascended into Heaven, She was assumed into Heaven; He reigns in Glory as King, She reigns as Queen; as He is the Head of the Church, she is the neck of the Church. Thus, as He is God, She is Mother of God.

Secondly, our devotion to Mary is required because just as she is ranked first in Heaven above the Angels who delight in beholding her radiant beauty in the words of Solomon as a woman that comes forth as morning rising, fair as the moon, bright as the sun and terrible as an army set in battle array [see Songs 6:10], in the same way, she is ranked above all humans of whom all generations will call her blessed [see Luke 1:48].  Therefore, it is fitting that She shall be called blessed in all ages because since God is present in all ages, Mary as well, for all ages remain the Mother of God.

The thought provoking question usually asked is: “How should we practice true devotion to Mary?” Among the several ways are that:

Conclusively, St Alphonsus Liguori summarizes what Marian devotion entails by saying that “True devotion to Mary consists in three things: confidence, veneration and love.” Truly, there is no servant of Mary that will ever go to Hell. Even if a devotee struggles with sin yet makes efforts to be devoted to her, she exercises her office as “Refuge of sinners.” Even if her devotee is afraid at the agony of death, she demonstrates her power as “Comforter of the afflicted” who prays for us sinners “now and at the hour of our death.” Even if her devotee faces disappointments of life, she is there as “Mother of Perpetual Help” and “Undoer of knots.”

The devils know these, and they fear Mary because she is “Terror of demons.” All is needed is perseverance in following Mary. No one who truly loves Mary will ever miss Heaven, no matter how hard it is. She also extends her assistance after death if one is in Purgatory. So, let us not fail to pray for departed souls. Our Lady loves them so much. As St Peter Damian teaches, she obtains the release of abundant number of souls in Purgatory on the Solemnity of her Assumption (August 15) because of the memory of her entry into Heaven. Mary herself desires more to see us in Heaven more than we desire. Thus, as her refrain says in the Perpetual Help devotion: “Mary has helped us. Mary wants to help us. Mary can help us. Mary will help us.” O Mary Mother of God, pray for us and help us!