Transport Fare Rises by 50% in Awka in January

Transport fare within the Awka urban has risen by 50 per cent, just a few weeks into the new year, 2022, a survey by Fides Media has shown, reports Alexander Johnson Adejoh.

The fare had remained constant from March to October 2021 but the festive season last December ushered in the new price.

A Fides survey conducted last week in Awka showed that the fare jumped further towards the end of the rainy season as most motorists attributed it to bad roads.

However, others blamed the development on the incessant increase in prices of other commodities in the market, high cost of vehicle spare parts and maintenance and too much charges by mechanics which had made it difficult for the bus drivers and tricycle riders (keke) to make profit. 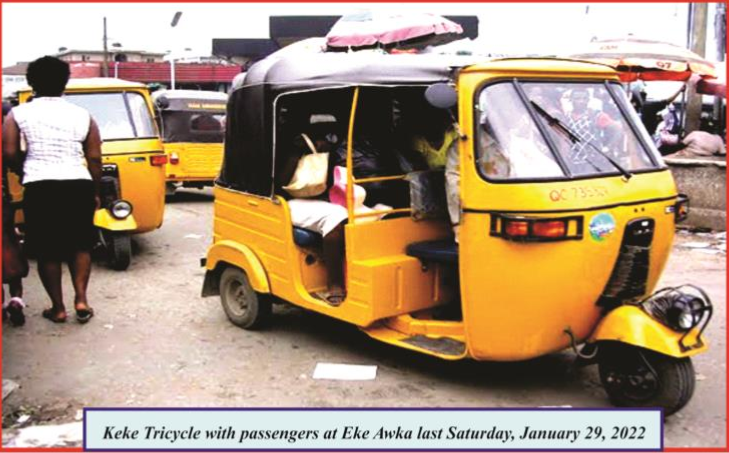 The survey revealed that the situation is at its worst in the morning and evening rush hours or when there is a traffic jam. This has made bus drivers to increase fares at will to the detriment of passengers.

Some of the drivers who spoke to Fides said they jacked up the fare due to the high cost of maintaining their vehicles, as well as cost of replacing worn out parts such as brake pads, engine oil, and others which they also attributed to bad roads.

A Keke rider, Mr Paul Adigwe, said the driving business was no longer lucrative in the state due to the ‘uncontrollable cost associated with it.’

He said, ‘It is surprising and unbelievable how the costs of other commodities in the market keep increasing on daily basis and we need to increase the money we charge to be able to meet up.

‘We pay various dues to the state and local governments, settle security agencies on the road and most times we spend a lot to repair our keke when they get spoiled, yet passengers are still complaining about how much we charge them,’ he lamented.

He predicted that transport fare in the state would rise further from now till April 2022 due to Easter celebration and the rainy season.

A bus driver, Hillary Eke, said public drivers were like other Nigerians with needs, noting that if the fare remained fixed with the present situation of things in the country, drivers and their families would die of hunger.

‘Prices of rice, beans and other household goods have doubled in the market and we, as Nigerians, we feel it too. Passengers need to understand and bear with us,’ he added.

Meanwhile, some passengers who spoke with Fides complained about the hike in fares when there was no increase in the pump price of fuel.

A passenger, Mrs Ngozi Obinna, said drivers would just wake up and add N50 or N100 to the existing fare without any notice.

‘Keke from Nodu Market to Regina Junction which used to be N50 is now N100 and no one is saying anything about it,’ she lamented.