Traders at the popular Ogbo-Ogwu International Market located in the commercial city of Onitsha are counting their losses valued at over 900 million Naira after a fire outbreak razed some shops at the area, leading to a stampede.

A trader who spoke based on anonymity expressed his grief over the situation, citing the harsh economic state of the nation. According to an eye witness report, the fire had started at mid day, Tuesday, after a certain chemical triggered the explosion.

The inferno was so severe that three apprentices in a single shop died instantly with several persons sustaining injuries. Reports had it that the tragic incident was as a result of a chemical explosion in the market.

Rescue efforts by the security agencies, including the Fire Service from Asaba, helped to curtail further losses. 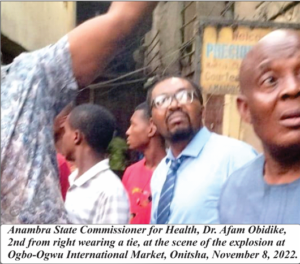 Meanwhile, the Anambra State Commissioner for Health, Dr. Afam Obidike, was present to join in the rescue operation of injured persons at the Ogbo-Ogwu International Market chemical explosion, Onitsha.

Obidike commended the efforts of the Anambra State Fire Service, market chairman, Mr. Chilota, and other good-spirited individuals, for their commitment in rescuing the affected persons, as well as conveying them to hospitals for treatment.

He said, ‘What happened here was as a result of a chemical explosion at the Government Line in the market and unfortunately many people got injured while some lost their lives and goods worth millions of Naira.

‘We are deeply saddened by the loss of lives, many injuries and material losses recorded as a result of this unfortunate incident.’

The commissioner explained that his visit to the hospitals was to ensure that those who sustained various degrees of injuries were receiving adequate medical attention.

‘So, I was able to interact with one of the doctors and he assured me that they would treat them well and, of course, I will be visiting often,’ Dr Obidike promised.

According to him, the Soludo-led Government would ensure that further occurrence did not happen again; even as he encouraged traders and the market leadership to emplace measures to avert and curtail accidents of any kind.