Tough Times for Umahi and Gang of Obi Haters

Within the week the governor of Ebonyi State, Dave Umahi, was quoted to have asked the people of the state not to vote for Peter Obi who is contesting for the presidency of the country in Labour Party. Obi had left the People’s Democratic Party, PDP, recently after he could not stomach the brazen display of corrupt practices in the run up to that party’s primary election.

Before then, he had amassed a mass followership that cut across all age groups in the country and they all were prevailing on the PDP to give its presidential ticket to Obi. When however things turned sour and Obi quit the party, his followers all declared that they were ready to follow him to any party, or, indeed, anywhere.

Some even jocularly declared that they would follow him to the Catholic Men’s Organization, CMO, if that was where he might decide to pitch his tent. When he eventually teamed up with Labour Party, they walked their talk and declared their support for the party and him.

According to the report which the Vanguard Newspaper carried, captioned, ”2023: Ebonyi People Will Vote Tinubu, not Peter Obi, Labour Party – Umahi Declares”, Governor David Umahi stressed that Ebonyi people would not vote for Labour Party, LP, in the 2023 general elections in the state. Umahi, who was said to have made the declaration during a swearing in ceremony, had insisted that the state would vote only for the All Progressives Congress, APC, and urged the people not to vote for the Labour Party during the elections.

According to him, the votes of the state only belonged to the ruling APC in the state.

His words, ‘We will not vote for Labour Party; we will only vote for APC. Our vote is for APC and not for Labour Party. Our agenda is Ebonyi agenda. We will vote for our presidential candidate in the person of Tinubu. We must strive to liberate Ebonyi State and that is our agenda.’

But today across the country, support for Obi has become the biggest trending news all over the social media space, despite the tantrums of the likes of Umahi. But it is not just restricted to the social media. Last Sunday videos of Obi visiting some churches like RCCG, TREM and The Lord’s Chosen, were awash. 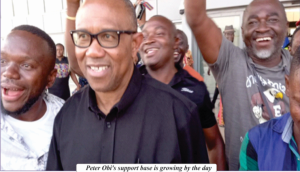 We all saw how the congregations in all the churches mentioned cheered him wildly immediately his name was mentioned or when he entered. Indeed, it is a no-brainer that were elections to be held today online, Obi would win with a landslide. This, of course, comes with a price – jealousy/envy, especially among those I’ll call the thieving political class. Unfortunately, most of them are right here in Igbo Land.

Leading them are the governors of Ebonyi and Abia States, Umahi and Okezie Ikpeazu. One of them, Umahi, had earlier been shouting that it was the turn of Ndigbo to produce the president. Indeed, he left the PDP last year because, according to him, the party was not showing any indication that it would give its ticket to the Southeast. He joined APC, telling those who cared to listen that it was a party that was likely to right the wrongs of PDP.

He then joined some other Igbo presidential aspirants to contest the APC primary only to lose without trace. His new found love, APC, simply settled for a western candidate, at a time the Igbos were supposed to have a shot deservedly at the country’s most coveted political seat. At the primary, the only Igbo voice that cried out for justice was that of Ogbonnaya Onu from Abia State. No one heard kpim from the likes of Umahi who, it is becoming clear these days, can do anything to win the trust of his Fulani masters.

After his primary fiasco, rather than show anger that his ethnic group was given the short end of the stick, Umahi is today proclaiming his support for Bola Ahmed Tinubu, a.k.a. BAT (bat indeed as we all know what it means in the Igbo Language). The man he is rooting for at the moment is from the west which never considered for a moment that it should be Igbos that ought to be given the ticket.

Tinubu also did not consider it worthwhile to visit any Southeast state during his pre-primary tours. And to think that Umahi is the chairman of the Southeast Governors’ Forum worsens the matter. How could a chairman of such a strong Igbo group be championing a cause against his own people? Could the west or north even contemplate doing such?

During the shenanigans as to who would be the APC standard bearer, President Muhammadu Buhari had pleaded with the governors and other APC leaders to allow him to present Mohammed Lawan as his candidate but the governors had refused and wanted an open contest. 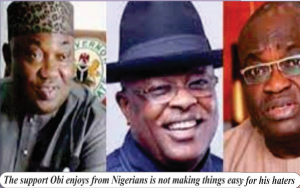 That open contest produced Tinubu. But many believe that the north will never vote for Tinubu in APC when their own son, Atiku Abubakar, is running in PDP. Already, we have heard about some early resignations from APC by some northern politicians who have gone on to join PDP. It is an early indication of what might follow.

Thus while the north is already strategizing to retain power, regardless of party, our Igbo politicians in APC and PDP are still playing atavistic politics to the detriment of their own people. This all goes to show that their initial noise about power shifting to the Southeast was all phooey. But it is not difficult to find out why these men are not ready to look Obi’s way.

Just as Obi came from nowhere in 2002 to become everyone’s favourite before winning the guber election later, he came into PDP from APGA and was chosen by Atiku over the governors of the Southeast Zone. Atiku chose Obi because he saw him as the brightest prospect and one who could make it easier for him to win. His choice was vehemently opposed by Umahi, Ikpeazu, Ugwuanyi and even Obiano here who was not even in PDP at the time.

I recall how the Anambra Government officials at the time did everything to minimize Obi’s votes here. But while it could be understood, being that Obiano was in APGA and Obi, in PDP, what would one say about the actions of Umahi, Ugwuanyi and Ikpeazu? That PDP got little less in the Southeast in 2019 than they got in 2015 was largely because of the actions of the Southeast governors who envied Obi’s popularity. But then, why would anyone of them begrudge Obi?

You could say that Obi deserves all he is getting today across the nation because he worked to earn it all. His leadership style, sincerity and achievements stood him out from the entire pack and made him attractive to the likes of Atiku who easily snapped him up to be his running mate.

Atiku knew that there were the likes of Umahi, Ikpeazu and Ugwuanyi but went for Obi. This did not go down well with them who wondered why a man who just joined the party could overshadow the old members. But they failed to note that it wasn’t about length of time but all about quality and integrity.

Even now, it is being reported that Atiku is still trying to woo Obi to return to PDP and be his running mate. He has seen the mass appeal Obi enjoys at the moment and is anxious to leverage that to secure victory in next year’s presidential poll. Again, he knows that Umahi and co are available but knows they don’t have what it takes to win the trust, confidence and admiration of the rest of Nigeria. Thus their envy of Obi’s rising profile is not justified one bit.

The way Umahi and co carried on at the APC primary has also proved that the people are right in their perception of them as a bunch of unserious politicians who can sell their people for their personal interests. Therefore, Umahi’s charge to his people against Obi may only have a limited effect as many people have on their own vowed to shrug off the pains of the present by charting their own future and they see Obi as that vehicle that will take them to that brighter future.

The actions of some of the Southeast governors on this Igbo project are enough to warrant selling them off if it were in those days when stubborn children were sold off by their parents. It is really a crass shame that at this moment when every good Igbo man should be fuming at the treatment meted out to his race by the political class, leaders like Umahi and Ikpeazu would be campaigning for those who denied Ndigbo their chance. But then, these are tough to times for those hating Obi. A lot will still happen that will raise the blood pressure of Obi’s haters, that, they can be sure of.