Quite apart from the euphoria of having a Nigerian athlete broke a world record at a prestigious international competition in which the country had never won a gold medal in 46 years, Nigerians and the country’s sports administrators have many great lessons to learn from the sterling performance of 25 year-old Tobi Amusan at the concluded World Athletics Championships in Oregon, USA.

For Nigerians, their country is great in many ramifications and can compete well with any other, globally. Hard work and perseverance are keys into getting the breaks. For the authorities, so much could otherwise have been achieved to put the country in much better standing worldwide, but for crass neglect, ineptitude and corruption. Even as the country celebrates Amusan, it is not too late to change attitude, use sports to redefine the country and reverse her declining status in the comity of responsible nations.

Every epoch has its defining moment for men and women, who shape history, either for good or for bad. At a time Nigerians are worried by breakdown of security, signified in increased killings and kidnappings, rising poverty, poor condition of living, as well as stagnation in the education and other vital sectors, including the strike by university teachers, which has kept Nigerian students at home for about six months, Oluwatobiloba Ayomide Amusan, gave her compatriots reasons to be hopeful. For those who do not know, Amusan on July 24, 2022, in Oregon, United States of America, became the first woman, living or dead, to finish the 100 metres hurdles in 12.12 seconds.

The world record would have been lower if the 12.06 seconds she achieved in the final in Oregon was not rejected because of a strong headwind that affected the race. Amusan’s time, set in the semifinals at the Championships, broke the old record of 12.20 by 0.08 seconds. In comparison, the previous four world records in the event were broken by slimmer margins (0.01, 0.04, 0.01 and 0.03 seconds). Not since 1980 had the world record been beaten by such a large margin. For Amusan, the time also marked a personal best, beating out her previous best (12.40) by 0.28 seconds. 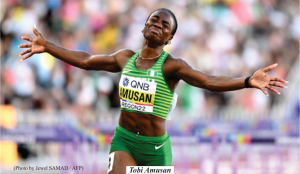 Apart from being Nigeria’s first ever gold medalist in the championship, Amusan’s 12.12 seconds mark was the first world record in the race in 36 years. It was the fourth world record set in women’s hurdles. The first two world records were set in 1969, when Nigeria was still fighting a civil war. Then, women hurdles were moving up from the 80 metres to the present day 100 metres.

The world record is a feat still being celebrated by Nigerians. The celebration cannot be otherwise, for a people who have been so traumatised by so many unfortunate, self-inflicted incidents, in a country with all the indices to be among the greatest in the world. The feat has also opened doors for Amusan, who apart from the $100,000 she won in Oregon, is now the beautiful bride, courted by many brands.

While we are celebrating Amusan, it is trite to remind the country that her feat would not have been possible if the Ijebu Ode-born athlete had remained in Nigeria; simply because of rudderless sports administration, lack of critical training facilities and other distractions.

Discovered while running for Our Lady of Apostles Secondary School, Ijebu Ode, Amusan came to national prominence in 2013 at the African Youth Championship hosted by Nigeria in Warri. A former footballer, who was converted to athletics when her coaches noticed that she was running faster than the ball, Amusan could only realise her potential when she relocated to the United States to study at the University of Texas at El Paso. The school availed her with world class facilities, sponsorship opportunities and chance to compete with the best runners from across the world.

In a country where tertiary students have been at home for about six months due to lecturers’ strike, the currency is on a freefall, prices of goods and services are skyrocketing, the national power grid on frequent collapse, while oil thieves are having a field day on and offshore, Amusan’s feat shows that Nigerians can excel in everything they set their minds on if given a little push by government.

Amusan experienced her own share of Nigeria’s ‘system failure’ on many occasions, including last year, when she came to Yaba College of Technology, Lagos, for the Tokyo Olympics Games Trials. On that cool evening, Amusan posted what could have been a new African record of 12.3 seconds, but the timer failed her.

Reflecting on what transpired at Yaba, Amusan wrote: “About 80 meters into the race, as I approached the home stretch, from the corner of my eye, I couldn’t help but notice that the display clock stayed at Zero the whole time. I had never experienced that before…the timer not working, happening during one of the biggest races of my career? … So, it was quite astonishing seeing all that effort come down to an important moment of just simply timing the final…”

After making history on that Sunday night at Oregon, Amusan mounted the podium to receive her gold medal, and the Nigerian National Anthem was played for the first time in the history of the World Championship. To Amusan, the victory at Oregon 2022 was as a result of hard work, perseverance and love for track and field. All her past disappointments notwithstanding, Amusan set a goal for herself, put in the shift, and realised her dream.

Three years ago, Amusan failed to make it to the podium, when the World Athletics Championship took place in Doha, Qatar. She also narrowly missed the podium last year at the Tokyo Olympic Games. In track and field, hurdle is one of the most technical and challenging races. At a point, Amusan was said to have mouthed her frustration to friends and considered giving up the sport entirely.

Here is a nation imbued with some of the most exceptional citizens with incredible world-class talents in sports and other disciplines. Despite lack of adequate preparation for games, Amusan was able to display her talents, winning laurels to the utter astonishment of many Nigerians back home. She demonstrated that Nigeria is kept alive by the stubborn hope among the majority of her citizens that one day, bad times and atrocious leaders shall pass.

There are many Amusans in Nigeria, but the challenge has always been the country’s inability to put together a system that can nurture their talents and turn them to world class athletes. Prominent among challenges facing the Nigerian athlete is government’s apathy to sports and a system that fails to accord due recognition to excellence.

In Nigeria, sports, which has become one of the highest revenue generating industries in developed parts of the world, is still seen as a recreational activity by government. It gets the lowest amount from the national budget and more worrisome is that the sector is the only one in Nigeria that the government appoints non-professionals as ministers.

Tobi Amusan can achieve greater height, just as more in her ilk can be discovered and nurtured to stardom. But the Sports Ministry and agencies must first provide the basics; while government must guarantee a secured and peaceful environment. It will be unfortunate if Amusan’s feat is left to be a flash in the pan, rather than the beginning of a continuum of sporting excellence.